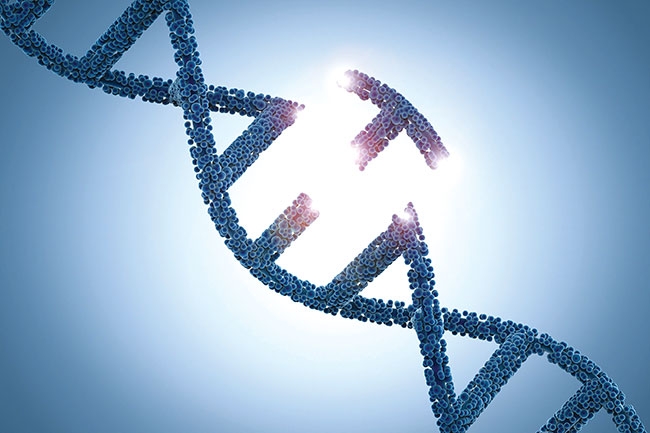 Gene editing differs from genetic modification in that it does not introduce any genetic material that could not normally be achieved through traditional breeding practices. The AquAdvantage Salmon produced by AquaBounty Technologies Inc. is an example of genetic modification, as they used recombinant DNA technology to insert a growth hormone-regulating gene from a Chinook salmon (Oncorhynchus tshawytscha) alongside an ocean pout (Zoarces americanus) promoter into an Atlantic salmon (Salmo salar) to enhance growth characteristics.

On the other hand, a company called Recombinetics uses gene editing to modify a variety of livestock species, and is pursuing research into aquaculture. They are most notable for producing a variety of hornless dairy cattle, created by inserting a single gene already found in other bovine breeds.

Dr. Alison Van Eenennaam, a cooperative extension specialist at the University of California, Davis, and a collaborator on the Recombinetics project, says that gene editing in the case of polled cattle is used to address an animal welfare concern. Typically, horns must be burned off to better protect the safety of farmers and other animals.

“TALENs is basically in a similar group to CRISPR; they are both what are called site-directed nucleases, which is just a fancy way of saying they are a pair of molecular scissors that cut exactly where you want them to in the genome,” Van Eenennaam explains. “TALEN uses proteins and CRISPR uses RNA… just scissors with a different pair of coloured handles that do the same job that creates a double-stranded break.”

Van Eenennaam argues that breeding is one of the most important disciplines as it relates to the safe sustainability of agricultural production systems. “This [gene editing] is not going to replace conventional breeding, it will enable us to effectively introduce useful genetic variation… which means you can achieve that objective in a way that doesn’t slow down your rate of progress.”

Research initiatives
In the aquaculture sector, there are numerous research groups investigating different methods of gene editing. Dr. Anna Wargelius from the Norwegian Marine Institute is leading a project using CRISPR/Cas9 to sterilize Atlantic salmon (Salmo salar) by gene knock out. This research could be used to ensure genetic containment of farmed fish and reduce the fear of interaction with wild populations. Wargelius has also mentioned interest in testing gene editing’s ability to increase omega-3 retention in Atlantic salmon as well as improve disease resistance.

At the Roslin Institute in Scotland, Dr. Ross Houston heads a research collaboration aiming to increase Atlantic salmon’s resistance against infectious salmon anaemia (ISA), using either CRISPR/Cas9 or TALEN. ISA outbreaks cost the salmon farming industry millions of dollars each year as infection can easily cause mass mortality. The first step of this project is to identify the specific genes involved in infection and then make alterations to them to hopefully reduce disease impact.

Additionally, Dr. Rex Dunham, from Auburn University, and his associates are working on the genetic improvement of channel catfish (Ictalurus punctatus) through gene editing. He has successfully induced sterilization by mutating the luteinizing hormone (LH) gene. Also, by modifying the muscle suppressor gene myostatin, research shows they were able to increase the number of muscle cells and increase body weight. Both genetic containment and increased growth performance are advantageous traits that could prove very beneficial to catfish farmers.

Other groups are working on Nile tilapia (Oreochromis niloticus), common carp (Cyprinus carpio) and rainbow trout (Oncorhynchus mykiss). It is important to note, though, that all forms of gene editing in aquaculture are still in the research phase and not a single example listed has been approved by regulatory authorities for commercial use.

Regulatory aspect
The future of regulation around gene editing, particularly in livestock animals, is unclear. Van Eenennaam maintains that, “Regulation should be based on product-risk and not breeding method.”

She goes further to state, “Because it wasn’t recombinant DNA being introduced in the genome, the thought was there is nothing novel here to regulate. And the USDA has taken that approach with plants, where if you’ve edited plants and you haven’t introduced novel DNA then that is not going to trigger additional regulation above the normal food safety requirements.”

Van Eenennaam warns that, “The precautionary concept as a principle doesn’t really allow you to move forward with technology and that is kind of what happened with recombinant DNA technology in animals, and I worry that the same thing is going to happen with editing. If we hadn’t allowed our plants and animal breeders to make the improvements they have using conventional selection, then we would have a much greater environmental footprint for our food production.”

She promotes using genetic solutions such as gene editing in agriculture to enhance and build a more sustainable industry.