In the town of Calauan in Laguna, located some 80 kilometers from Manila, a husband-and-wife team received a suggestion to convert their rice farm into a tilapia hatchery. 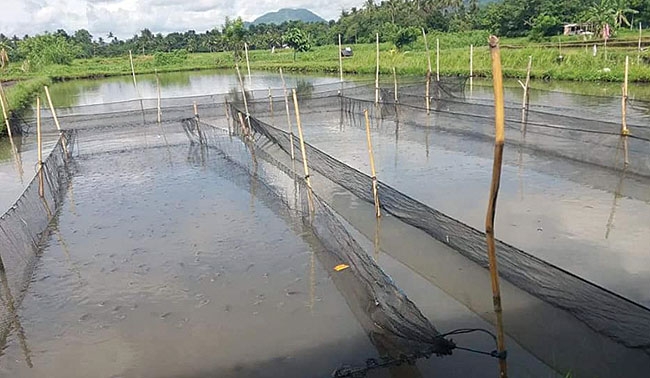 L&C Tilapia Hatchery in Laguna was originally a ricefield.

In the Philippines, where people eat rice with their meals as much as three times a day, demand for the grain will always be constant. Production yield though is sometimes at the mercy of nature. While the hatchery would pretty much be in the same boat, the financial returns would be better.

Lucio and Cora Ilagan went for it and established the four-hectare L&C Tilapia Hatchery in 1998.

The conversion process was not complicated. The height and width of existing mud dikes that bordered each field were increased by one meter. The pond was plowed to condition it. As before, water was supplied by the same irrigation system.

Except for the addition of fish nets and bamboo poles, the required tools and implements were no different from those they had used in farming: a manual plow, a mower, shovels and sickles.

The man who pitched the business idea to them, his parents’ friend, walked them through the process. “He taught us the know-how. He showed us how to operate a hatchery. We also attended seminars on how to raise tilapia broodstock.”

The tough part came when it was time to get the business off the ground. The challenges of those initial years were all-encompassing: finances, feeds, broodstock and buyers.

Determination saw them through, however. They were able to secure a loan for additional investment requirements. To have a good inventory of quality broodstock, they researched the right protein feeds and consulted the Bureau of Fisheries and Aquatic Resources (BFAR) in how to select appropriate tilapia species. They talked to tilapia farmers in Taal Lake in the neighboring province of Batangas.

The regular pond size is 15 meters by 20 meters. “The sections of the hatchery are in the pond itself. Once the broodstock lay eggs, the eggs are collected and transferred to a section surrounded by fine nets to condition them,” Lucio said. They have a staff of 15, whose main task is to collect larvae and fry.

L&C Tilapia Hatchery in Laguna was originally a ricefield.

Broodstock ratio is three females for every male per cubic meter.

They do cross-breeding to improve the breed of tilapia that comes from BFAR. They also get broodstock from the Central Luzon State University.

Although there are a number of tilapia hatcheries in Calauan, Lucio doesn’t feel the competition. “At present, we don’t have problems with regard to competing for business because we have regular buyers,” he said.

In addition to those from Batangas, he has also developed clients from the provinces of Rizal and Pampanga.

Market for fry is good because consumption of tilapia in the Philippines is high. When it comes to establishing continued patronage of his clients, he said that transparency and being trustworthy, especially when it comes to delivering the volume of fry ordered, are important.

Business may be good, but that is not saying that everything is going smoothly.

Since theirs in an open-pond operation, they are easily impacted by natural elements. Weather conditions put a cap on production. Yield is low from April to June, when it gets too hot, and in December, when it gets too cool. The extreme temperatures put stress on the broodstock, affecting their reproductive capacity.

During these periods, production of fry drops by as much as 80 percent, according to the couple.

There are occasions when broodstock sustain cuts, typical during transit from the source to the hatchery. The no-frills treatment calls for pouring 7.2 kg of rock salt in the pond where the affected broodstock are observed. The same treatment is administered in ponds where broodstock death is observed due to pollution.

Pond water is changed after each treatment.

During the summer months, pond water level is increased and there is continuous supply of running water to maintain the oxygen level requirements of the fish. They continue to provide nutrient-laden diet.

But he realistically admitted that these wouldn’t achieve much. “We have no solution for extremely hot weather conditions. So we basically just wait it out for the ideal temperature to come,” he said.

While summer is a dreaded period for open-pond hatcheries, it is an ideal time for tilapia farming. Lucios plans to expand into this venture by next year.