The last several months have seen a variety of vandalism incidents at hatcheries around the world that led to the loss of fish and related capital. While it varies from case to case whether these incidents appear to have been politically motivated, specifically targeted or are merely random acts of vandalism, they do have some hatchery operators talking about their security measures and what is required to prevent such incidents from occurring in the future. 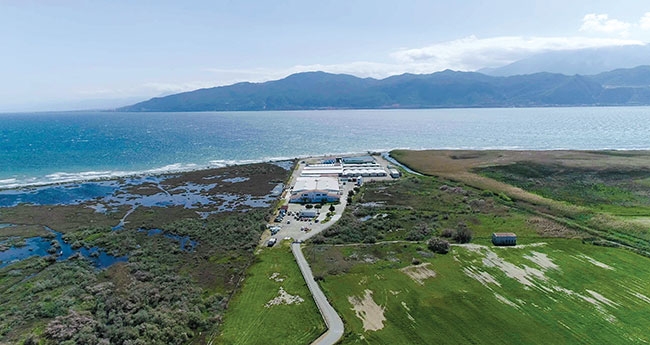 A remote location is not enough on its own. While Selonda Aquaculture’s hatchery in Managouli The last several months have seen a variety of vandalism incidents at hatcheries around the world

Location matters
One of the most important things to consider regarding level of security is the location of the facility. In many cases, hatcheries are found in areas where their very location acts as a form of deterrence. Chris Matteo, owner of North Carolina’s Chadwick Creek Oysters, says his facility is within the area closed off by a private
7,000-acre duck-hunting club, making it an ideally remote location.

“We have 110 acres on the water,” says Matteo. “We’re surrounded by dense forest and there’s a gated entrance about a mile from the actual hatchery that requires a gate code and has a moat on either side. Our creek, there’s just one way in, one way out. We’re in a very rural place, so it’s pretty secluded and the town maybe has 50 to 60 residents.”

On the other hand, if your hatchery is closer to an urban center, security can be even more important. Bill Gass, production manager for Alaska’s Southern Southeast Regional Aquaculture Association, says while most of the seven facilities under his management are in similarly rural settings and have been largely incident-free, the one hatchery in a town did suffer a burglary that caused the organization to rethink some of its security measures.

“We had a couple of minor burglaries over the years that prompted us to put in some security cameras,” says Gass. “They didn’t touch any of the fish systems or life-support, they were trying to grab a little cash and took a couple of things. But we have gates and signs and outside residences, and all our water systems are alarmed, so it’s something we’re starting to consider a little more.”

On-site personnel
Antonio Coli, head of group hatcheries for Greece’s Selonda Aquaculture SA, says while they do have some of the obvious security measures, such as fencing and security cameras, a key security effort is much more low-tech: ensuring that the hatcheries are staffed 24 hours a day. Having staff onsite enhances both physical security and bio-security, Coli says.

“Around 4:00 PM, we put the alert out that the late shift guys have arrived to the farm,” says Coli. “A hatchery may have 25 people in the morning, and then another three in the late shift. These guys are working until around 10:00 PM. And a while before they go, night shift is coming. That normally is another two to three people that will have to work until morning. Their task, apart from preparing some fish for the next morning and some basic tasks, is guarding the farm.”

A remote location is not enough on its own. While Selonda Aquaculture’s hatchery in Managouli

Higher-tech
Depending on a hatchery’s location and the potential challenges it faces, higher tech solutions should be considered. While security cameras and motion-activated lights hardly seem cutting edge in 2018, web-based cameras provide a modern twist. In many cases, the important thing is to alert a potential trespasser that they are being watched.

“Nowadays, especially with cellular technology and Wi-Fi and all the rest of it, it’s pretty easy to monitor stuff,” says Matteo whose cameras are clearly visible to act as a deterrent. “Even in remote areas, I think it’s a worthwhile investment to get cameras up and running, especially if you don’t have back-up systems in place, though I would encourage those too. If vandals have cost hatcheries a lot of money by doing something silly, it just makes sense to have cameras.”

Matteo says a neighbor once spotted a trespasser on his property and flew a drone overhead to let them know they were being watched. While not a part of the security measures utilized by any of the operators who spoke to HI, drone technology could be another very effective technique for monitoring a site, and perhaps more importantly, for informing potential intruders that they are being watched.

Fencing and non-human vandals
The most obvious security solution to be utilized at a hatchery is fencing and gates with a lock that can only be opened by authorized personnel. They are also crucial for preventing intrusion by a different type of potential vandal – bears and other wildlife. Many hatcheries are in remote settings away from large human populations, and they can often be found in the heart of bear country.

“I would say that the security that we’ve put in place was more about keeping bears out and making sure that if a life support system for livestock failed that we have a short enough response time that we can mitigate any risk of loss,” says Scott Peterson, freshwater production manager for Grieg Seafood’s Gold River Hatchery in BC. “That’s definitely been our biggest challenge. We have chain link fence, and then on that fence there’s two strands of electrical wire to keep the bears from coming in. If they don’t find an easy way in, they’ll move on to easier food sources.”

Vandalism at hatcheries in 2018