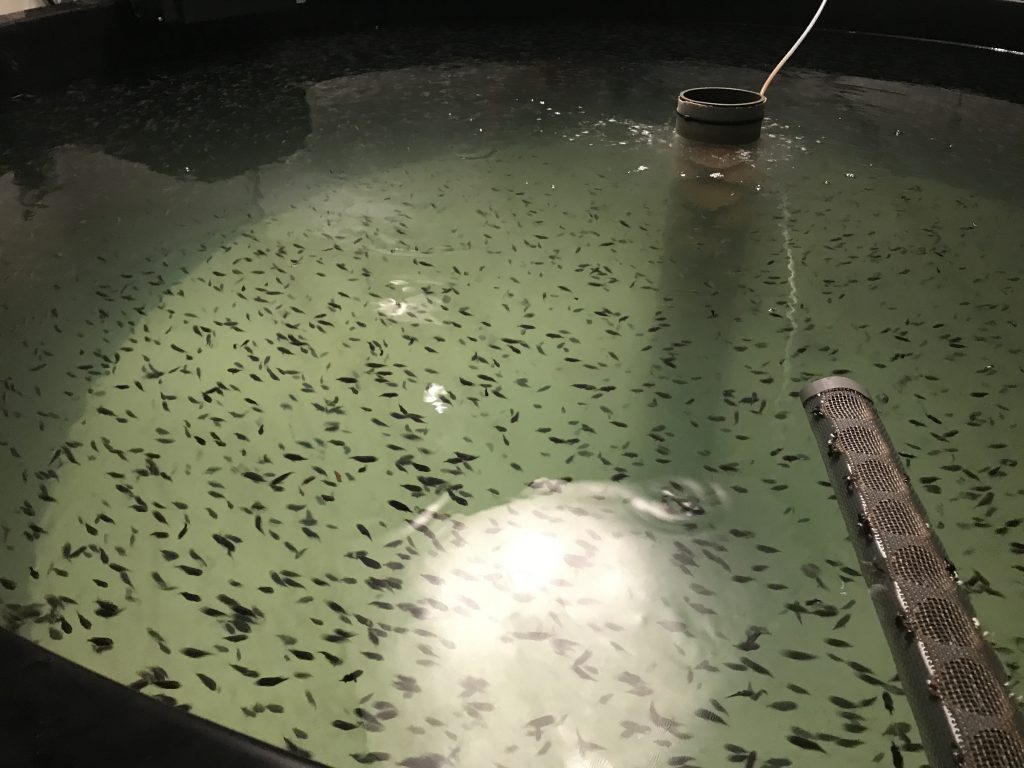 Kingfish Zeeland's RAS facility in The Netherlands includes two hatcheries - one dedicated to egg production and the other is for R&D. (Photo credit: Kingfish Zeeland)

Kingfish Zeeland raises the high-value Yellowtail kingfish in a recirculating aquaculture system within a 5,000-square-meter facility along the Oosterschelde marine estuary in the province of Zeeland in the Netherlands. It recently announced plans to build a US$110-million land-based production facility in Jonesport, Maine, USA, to bring its Yellowtail to the US market.

“Nutreco’s ambition is to continue to invest and partner with leaders in sustainable protein production around the globe,” says Nutreco CEO Rob Koremans. “This investment fits well with our strategy to play a leading role in the development of sustainable solutions to fulfil our mission. Over the past few years, it has become clear that the growing demand for seafood calls for development of alternative farming models such as RAS to complement the existing aquaculture methods.”

The feed company’s chief innovation officer added Kingfish Zeeland’s proprietary RAS technology is the “kind of innovative and technologically-knowledgeable partner we want to be working with.”

The new funding, which comes from Nutreco and several other investors, including France-based Creadev and Netherlands-based Rabobank, will enable Kingfish Zeeland to double its current production capacity of 500 tonnes per year, as well as prepare for their next steps toward large-scale production across both the US and Europe, Nutreco said in a press release.

In addition to the investment made in Kingfish Zeeland by Nutreco, the two companies will also cooperate on further development of best in class RAS feeds, which would allow the Dutch Yellowtail producer to further address what has been one of its biggest challenges in producing RAS-grown Seriola lalandi.

In an earlier interview with RAStech sister publication, Hatchery International, Kingfish Zeeland chief operating officer Kees Kloet said the biggest challenge for his company has been in feed quality, which led the company to collaborate with feed suppliers to develop and achieve the specific feed formulation for the Dutch Yellowtail.

According to the Nutreco announcement, it’s subsidiary Skretting is currently delivering juvenile feed to Kingfish Zeeland operations, and the companies will be working towards broader cooperation on the feed moving forward.

“We are excited to develop a partnership with a strategic industry leader such as Nutreco, and work closely with its aquafeed division Skretting,” said Kingfish Zeeland CEO Ohad Maiman. “As we enter the scale-up phase of our mission to advance a first mover position in the sustainable production of premium seafood, we see strong alignment with Nutreco’s mission and values, and are grateful for their strong support and vote of confidence. This partnership will help Kingfish Zeeland accelerate large-scale production of yellowtail through RAS across the US and European markets, and is a critical milestone in our development.”

Kingfish Zeeland has achieved certification under both the Aquaculture Stewardship Council and Best Aquaculture Practices. The production facility in the Netherlands also gained BRC Global Standard for Food Safety certification.