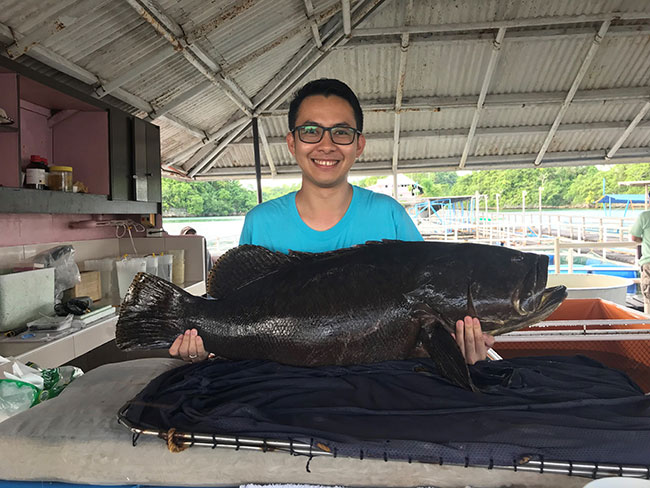 A non-invasive method of determining sex of giant grouper (Epinephelus lanceolatus) broodstock has been developed by an international collaborative project between the Philippines, Vietnam and Australia. It only requires scraping off grouper skin mucus into a glass slide and determining the presence of a protein female marker, vitellogenin.

Grouper are hermaphrodrites. The common method of sex determination among fish broodstock requires cannulation biopsy, which damages tissues and could lead to infection. Biopsy also requires skills which take time to develop and its accuracy mainly depends on the skill of the staff performing the biopsy, Peter Palma, researcher at SEAFDEC/AQD and one of the co-authors of the study, told Hatchery International.

Another advantage of the non-invasive method is early detection. “Through immuno-detection of vitellogenin in skin mucus, ovarian development could be detected well in advance prior to observation of oocytes through biopsy,” he said.

This provides ample leeway for farmers to select maturing individuals starting to develop as females. “In existing spawning population, this method provides a more accurate estimate of females regardless of their gonadal stage, either spawning or resting, ensuring optimum sex ratio,” he explained.

“Hormonal treatment to induce early female maturation can take advantage of this method as a reliable measure of gonadal development. We have also observed that there is reduction in skin mucus vitellogenin level in giant grouper in response to androgen (methyltestosterone). Treatment, therefore, can be applied to monitor successful female to male sex reversal.”

The assay is capable of detecting vitellogenin in other grouper species such as the tiger grouper. It has also been applied for studying reproductive development of Eastern Atlantic bluefin tuna, Palma said.

The study, “Reproductive development of the threatened giant grouper Epinephelus lanceolatus,” was funded by the Australian Center for International Agriculture.