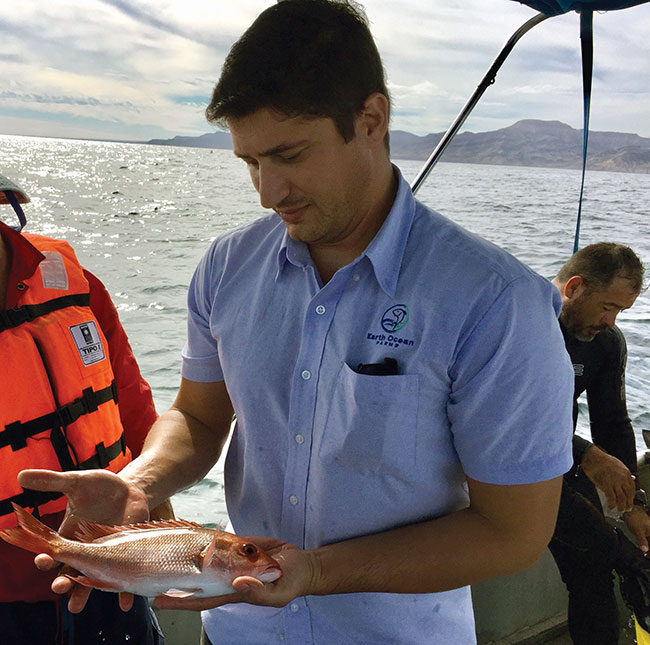 While much of the specifics of Earth Ocean Farms’ technique is proprietary knowledge, Cavalin says it involves controlling every aspect of the hatchery environment, including lighting, air and water temperature.

Earth Oceans Farms, part of the Cuna del Mar portfolio, was established in 2012 in La Paz, Mexico. The company’s mandate is to develop aquaculture for new species and, over the years, they have conducted research and development for high value marine species such as Totoaba macdonaldi and Pacific red snapper (Lutjanus peru).

In 2013, the only marine finfish species available was totoaba, pioneered for aquaculture by Dr. Conal True of the Autonomous University of Baja California (UABC), says hatchery manager Fernando Guido Cavalin. Totoaba were once the subject of a lucrative wild fishery in Mexico, however, as the endangered vaquita marina porpoise was regularly being captured in totoaba nets, totoaba fishing was banned.

“But there’s been a lot of effort to develop aquaculture technology for the totoaba, which is an amazing species,” says Cavalin. “We’ve had growth rates of three to four kilos in one year, and a feed conversion rate of 1.3-1.5. It’s very disease resistant.”

Earth Ocean Farms purchased totoaba juveniles from UABC and set up their first grid of off-shore aquapods shortly thereafter. In 2013, the farm established its hatchery.

“The hatchery is basically full RAS,” says Cavalin. “RAS for broodstock, for nursery, and partial RAS for larval rearing. Because conditions in the Baja are quite extreme, the water temperature, the amplitude is too high. It gets up to 30 degrees Celsius in the summertime and it’s quite cold in the winter, 19-20 degrees Celsius. So, in rafts, we have more control of water temperature.”

Self-sufficient
Earth Oceans caught its first totoaba broodstock in 2014, had its first spawns in 2015, and reached a level of self-sufficiency in commercial production in 2016. However, Cavalin notes, the company knew that totoaba could not be the farm’s entire portfolio. For one thing, under the Commission for International Trade of Endangered Species (CITES), the export of either wild caught or farmed totoaba is banned, so the company can only sell that product to local markets. In order to produce totoaba at all, the company is required to release a certain number of fish back into the wild each year.

“The company always knew the uncertainties of the totoaba, so we always had R&D for the pacific red snapper on the back burner,” says Cavalin. “Our Mexican species is called huachinango. But it’s not easy. We’ve had broodstock since 2014, but it took us a while to control year-round spawns.

“We have three rooms of broodstock. First, we have to learn how to condition fish to spawn naturally year round. So each room is conditioned to spawn for three months. That was our major accomplishment with red snapper, controlling their spawning naturally by manipulating photothermal cycles.”

Cavalin’s team started to see good results for red snapper spawning around 2015. Prior to that, the survival rate was close to zero, but inched upwards over the following years. In 2018, the company saw a major breakthrough, and closed the year with a five percent survival rate.

Earth Ocean Farms began its operations farming Totoaba in open net aquapods, as seen here, but with the export of the species banned, the company began to focus on red snapper.

EOF broke ground on their new hatchery in April 2019. They expect it to hit full production by June or July of 2020.

Secret to success
Cavalin says he can’t discuss the specifics of how they achieved those improvements (“You’re asking the silver bullet question,” he says with a laugh). But he points out that it involved dedicated, constant work with the species for years, and learning to control every aspect of the hatchery culture environment, including lights, air temperature and water temperature.

Cavalin acknowledges that someday Earth Oceans may look at licensing the technique to other operators, but for now, they will keep their operation in-house.

“I like to do an analogy to a chef,” says Cavalin. “A chef can disclose the recipe, ‘these are the ingredients,’ but it’s hard to replicate how a chef must cook, how he sets up his kitchen, the way he uses the stove, his timing. That’s what the company is trying to protect.”

This past April, the company broke ground on a new commercial hatchery, and expects to have fish and flow-through systems in place by December, with full operation coming in June or July of 2020. This has been a long-term plan, as the current facility is only 1,600 square meters, meaning that totoaba production and red snapper R&D had to be conducted in very close proximity to each other.

“Since we started producing good numbers, the company made the commitment, ‘let’s go ahead with a commercial hatchery so we can back up the extension of the farm and processing plant and sales.’ The facility is 7,000 square meters and we’re going to have large tanks for totoaba or perhaps a third species. Larger tanks for red snapper, full rafts. There is area and capacity for up to 10 million fingerlings. Our production right now is around a million fingerlings a year. And we need to just scale up to meet farm goals.”

The potential third species Cavalin mentioned has not yet been decided. There are several species with potential to be grown in the area, including Pacific snook and yellowfin tuna. Cavalin expects to see a market assessment and some R&D trials conducted in the next year, which will determine how the company proceeds.

“We need to see how the fish is going to do in the hatchery, get down our key production index, juvenile production, see how it grows in the farm, know the feed conversion ratio,” says Cavalin. “But it’s in our back burner for now.”

Cavalin struggles to pinpoint the most challenging aspect of Earth Ocean Farm’s business model – everything has been a challenge, from learning to work with offshore aqua pods to the long R&D process. But one of the more consistent and unique challenges has been the weather, he says. The farm is located in a hurricane zone and August and September are generally very difficult months.

“We got hit by a hurricane in 2014,” says Cavalin. “It tore the hatchery apart. It caused damages to the farm. So that’s very challenging. We could choose to do something easier closer to shore, but our operation is two and a half kilometers so it needs a lot of boats. The operation over there is not easy.”

The Baja Peninsula is becoming a hub for marine finfish aquaculture. Kampachi Farms, Pacifico Aquaculture and others are nearby, working on species such as striped bass and almaco jack.

“The new species industry is growing strong in Mexico,” says Cavalin. “The way Mexico is pushing for aquaculture, it’s attracting more investment and for people to come work here. At Earth Ocean Farms, we have people from all over the world.”