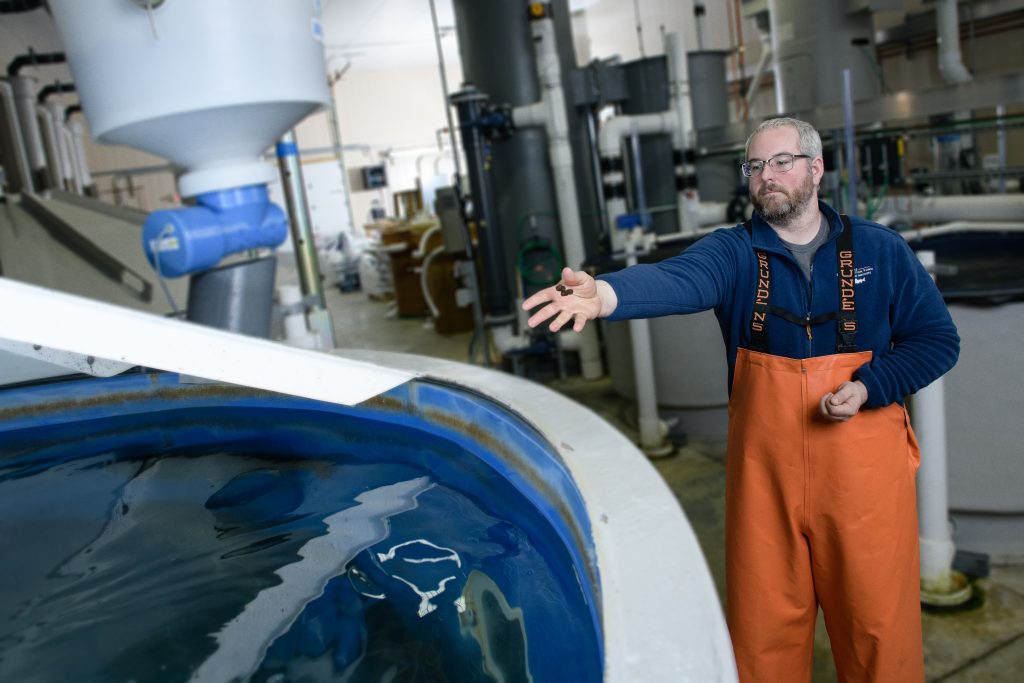 Curtis Crouse could still remember that fishing trip with his dad when he caught the fish that would inspire him to pursue a career in animal science. It was a tiny bluegill small enough to fit his Slurpee cup that he was able to bring it home with the intent of keeping it as a pet. It eventually ended up in his uncle’s pond, where he watched his friend grow bigger.

“When I saw how large he had grown, I was as excited as when I originally caught it. I may not have known what to call it at the time, but this is the origin of my interest in fish culture,” Crouse recalls.

Thirty-four-year-old Crouse is the assistant aquaculture production manager at The Conservation Fund’s Freshwater Institute in Shepherdstown, West Virginia, in the U.S. He has a Bachelor of Science in Animal and Avian Science from the University of Maryland and a Master’s in Zoology from Southern Illinois University. Prior to joining the FWI, Crouse has gained considerable experience in fish research at various institutions, working with diverse fish species, including raising zebra fish in recirculating rack system, hybrid striped bass in ponds, and salmon in both RAS and flow-through systems. Since joining FWI, Crouse has become one of their hands-on RAS experts.

“In just six years at the Freshwater Institute, Curtis has made strides in helping the RAS community solve the challenges they don’t have the time or expertise to tackle. Curtis does excellent work and get things done, and he is modest,” writes Crouse’s manager Travis May, in his nomination submission.

Crouse has authored and co-authored numerous studies published in peer-reviewed journals, including: a study on growth and fillet quality attributes of five genetic strains of rainbow trout reared in partial water re-use system; production of market-sized European strain Atlantic salmon in a land-based RAS; and the use of alternative lipids and finishing feeds to improve nutritional value and food safety of hybrid striped bass. He has also presented at numerous aquaculture conference over several years. 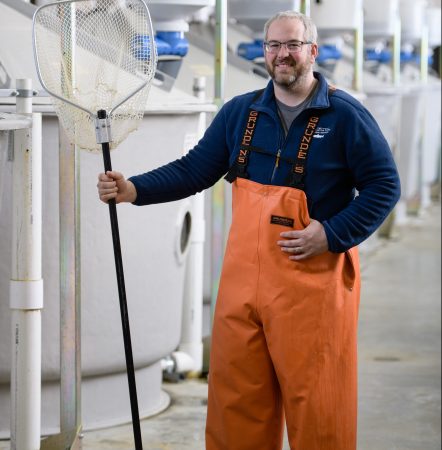 “Curtis is an exceptional writer and researcher,” says May. “As you can tell from the following list of publications and accomplishments, Curtis has conducted research in numerous areas of interest within the RAS field. In addition to producing peer reviewed publications, Curtis has a strong focus on spreading practical RAS information.”

Crouse is a scientist by nature, preferring to investigate the fish – their movement, size and history – in a production tank rather than in a fishing ground. He is excited about the vast knowledge potential that are yet to be harnessed about the various food fish species and how he can contribute to improving techniques that will maximize production in a sustainable manner.

“Aquaculture will have a large role to play in sustainably feeding the world’s growing population,” Crouse says. “As such, production will need to scale to meet the growing demands. My goal is to create resources and be a resource myself that can be helpful for the growth of the aquaculture industry both internationally and domestically.

He stresses the important role that young professionals – even the neophytes – can play in a production facility’s growth, particularly in the face of increasing pressures to produce more with the same or fewer resources while maximizing efficiency.

“I think young professionals can help at any site, even their first day on the job, simply from seeing how a facility operates with fresh eyes and trying or suggesting a different approach,” Crouse points out.

He adds the importance of continuous learning for those who want to pursue a career in aquaculture. Consider the diversity of opportunities that exist within the aquaculture realm and try to gain experience in as many settings as possible. “Given the relatively small pool of experienced aquaculture farm workers, this may also set you apart.”