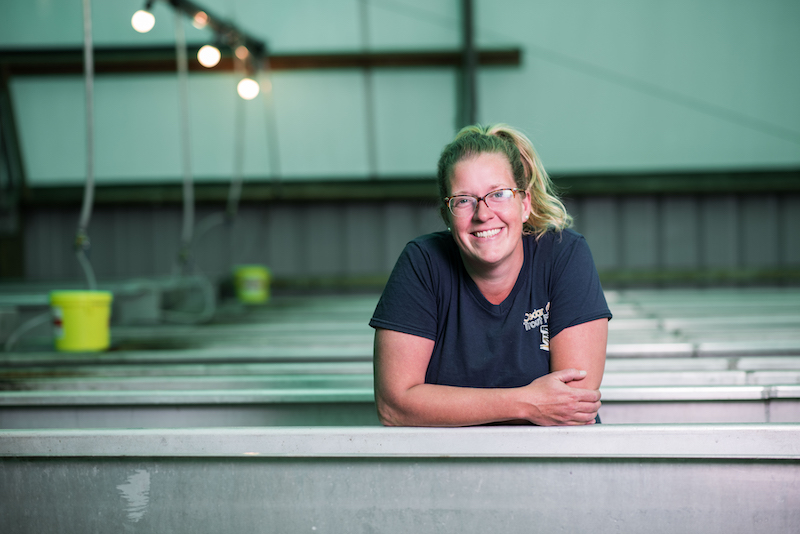 As if managing five complex hatcheries is not enough, Arlen Taylor also serves as the go-to person for other farms that run into occasional troubles, be it another trout hatchery nearby, a barramundi RAS farm or a net-pen operation. In her spare time, Taylor also acts as industry lead for various government and non-government entities, including the committee writing the Code of Practice for the Care and Handling of Farmed Fish in Canada.

“You could say that trout farming runs in my blood,” says the 32-year-old director of operations at Cedar Crest Farms in Hanover, Ontario, Canada.

Taylor’s father was a pioneer in establishing one of the first land-based trout farms in central Canada. She and her brother, RJ, grew up in a hatchery, spending most of their childhood feeding, moving and caring for fish.

Taylor remembers waking up before dawn to load trucks at the farm before going to school, or pushing feed bags off a flat-bed with her brother and “dreaming of the day we could lift them ourselves.”

Despite growing up around the hatchery, Taylor did not get in to the family business until six years ago. During her early 20s, she worked abroad – in Angola, Mozambique and Iraq – doing logistics and humanitarian work. But when her family needed her, she responded.

“While I was building companies overseas, the family business was struggling to keep up with demand. With a deep sense of family responsibility, I moved back six years ago to take over and grow the business,” Taylor recalls. And grow the business she did. 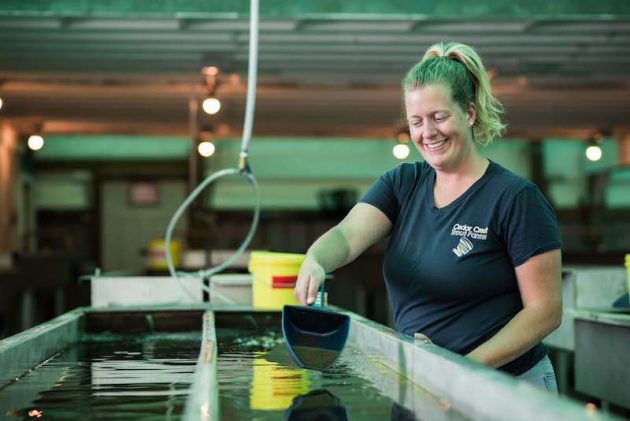 Arlen Taylor and her brother RJ grew up working at their family’s hatchery. Arlen’s leadership was instrumental in building her family’s company into the one of the largest suppliers of trout fingerlings in Canada.

“These gains have come because Arlen streamlined many parts of the operation by bringing in new technologies: automated fish counters, pumps and graders, as well as a fully open-sourced production software,” RJ says. The result: the largest period of growth in Cedar Crest’s history.

Her keen sense of leadership earned the respect of her team, who have come to realize Taylor’s management style: Work hard, play hard. Weeks of long-hours and hard work at the farm would be followed by a big party that involves fun and games for the farm staff.

“Arlen’s generosity never stops, from endless Coronas on Friday afternoons to an Alaskan cruise for our oldest farm manager in honour of 30 years with the business,” RJ says.

Despite all her accomplishments, Taylor measures her success by how she feels at the end of the day. “Not the tired, aching bones that can sometimes come from daily activities. But did we have a good day? Did we have fun? Did we laugh? Do we still love what we are doing?”

She views her team at Cedar Crest as family – spending most of their waking moments together.

“I would love to keep working and growing our hatcheries if it means I get to work with our amazing people and tackle fun new challenges,” Taylor says.

Her advice to young hatchery professionals: “School will teach you the technical skills to work in a hatchery, but it takes years of experience to learn the leadership, intuition and problem solving you’ll need to run one.”