Inhabiting the cool, fast flowing reaches of the Murray River and her tributaries, the ecological niches of the trout cod and Macquarie perch have been disrupted by agriculture and forest clearing, and their migratory routes blocked by dam construction. 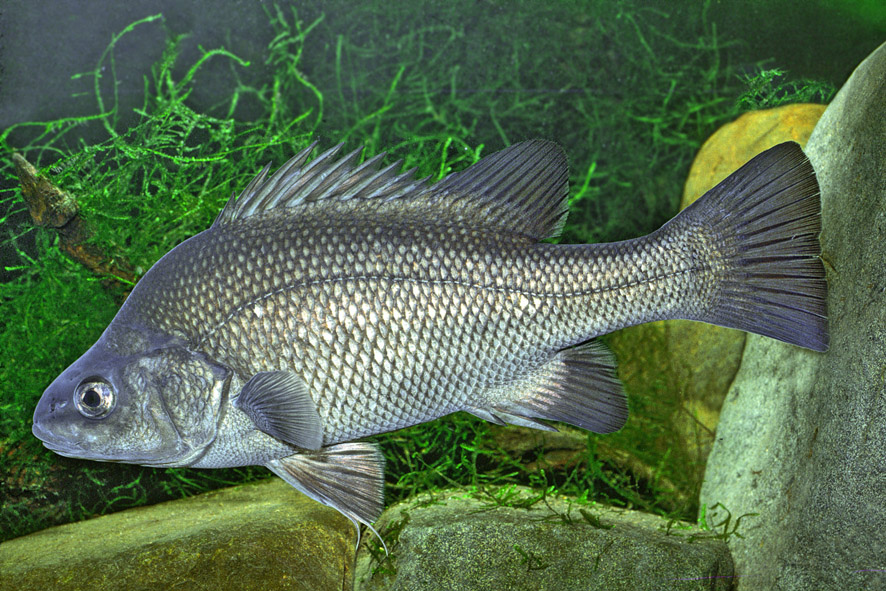 Besides marsupials and the egg-laying

What’s more, while the trout cod (Maccullochella macquariensis) responds well to hormone-induced spawning and larval rearing, the Macquarie perch (Macquaria australasica) does not. Thus, in 1981 a group of concerned anglers and conservationists formed Native Fish Australia (NFA) to campaign for the wellbeing of Australian native fish. One of their major projects has been to maintain (and establish) sustainable populations of both species in their natural habitat, as well as some of the equally threatened minnow-sized species such as the southern pygmy perch (Nannoperca australis).

Relying on membership fees, donations and the occasional government grant, NFA runs its own breeding program from a small hatchery donated by La Trobe University in the northern suburbs of Melbourne.

The trout cod is a close relative of the Murray cod (Maccullochella peelii), but favours the faster running reaches of the river, right up into its uplands. The Macquarie perch’s ecological niche is similar, but favours the colder upper headwaters. Both are great angling fish, particularly the Macquarie perch. It will take a wet or dry fly, a spinner or bait, and once on the line has fighting capability well above its weight. To cap it all, it is a superb eating fish. The downside is that it’s a threatened species.

Tim Curmi, the President of NFA (Victoria) said the trout cod program had been successful, and the species was now well established in several systems.

“We produced tens of thousands of fry from our conditioned broodstock. Members held them in home aquariums and made sure they wanted for nothing. The Ovens River (a major tributary) and the Murray River below Yarrawonga Weir now carry sustainable breeding populations of trout cod.”

There’s a strong argument to open the two regions to recreational fishing so they can be managed – and policed – as such, rather than just locked up as a conservation area. As it is, based on the return of fish tags, a good proportion of the anglers can’t differentiate between Murray cod and trout cod anyway.

“The Macquarie perch situation is very different,” Tim said. “Unlike the trout cod, no one has managed to condition broodstock. We still rely on capturing running ripe males and females during the breeding season. We’re fortunate in a way; over the years, inland catchment species have been introduced into the Yarra River. Melbourne, back in the 1850s with the Gold Rush in full swing, was short of protein, so fish were brought across the Dividing Range to the coastal catchment and stocked as a food source. Later, in the 1920s, recreational anglers replenished the dwindling stocks. As the introductions were piecemeal, we have fish with a wide genetic diversity at our doorstep.”

To spawn naturally, the fish congregate in large schools, migrating to the gravel beds of the headwaters of their home tributary. The incubation period of the lightly adhesive eggs is temperature dependent: at 11-14ºC, incubation can take up to 18 days. They normally have higher ranges than that in the atmospherically controlled temperatures of the hatchery.

“In an El Niño year it’s a real battle to keep the hatchery water down below 20ºC. Incubation is normally completed in 7-10 days,” Tim said.

The NFA volunteers set fyke nets to catch broodstock in the Yarra towards the end of October and into November. It’s not been established what triggers maturation and ovulation, but the current thinking is that it’s when the temperature reaches 15.5°C, or when there’s a quick jump from, say, 13°C to 16°C. Day length doesn’t seem to be a factor, although, it has an obvious connection with water temperature.

Mature males and females are easily identified by the redness of their vents. Females take three years to reach maturity and produce 30,000 eggs per kilo. Males can mature in their second year. The water-hardened eggs double in size to 4mm.

Mature wild fish are taken to the hatchery and a few opaque eggs, withdrawn with a catheter, are cleared with a solution of formalin, acetic acid, alcohol and water. If judged to be sufficiently mature the anaesthetized females are injected with Polygon at the rate of 0.5g/kg. Twenty-four hours later they are given an injection of Overprim at the same rate. If ovulation has been triggered, the eggs are hand stripped into a bowl and mixed with the males’ milt. The fertilized eggs are then placed in Macdonald jars.

Once hatched, the larvae live off their yolk sacks for three days before feeding commences. They are fed Paramecium for the first two weeks. NFA have been experimenting to find the most efficient culture base for raising the 10-20µm protozoans. They are currently successfully using a lucerne (alfalfa) tea. Tim said that their biggest problem at this stage was providing enough feed for the ravenous larvae. Once the fry are large enough – about 14 days – they are fed brine shrimp (Artemia) nauplii.

“Maccas”, unlike most other recreational Murray Darling species, won’t wean onto a dry feed, which means that on-growing them places a huge strain on the volunteer workforce at NFA. Fortunately, the fish eat just about anything that moves in the aquatic environment. NFA have identified a number of local wetlands and dams from which they can harvest Daphnia and other invertebrates to feed the fish once they outgrow Artemia. Later, they source river shrimp and worms, but it’s a never-ending chore.

In a perfect world

Tim said that in a perfect world they’d grow the juveniles selected for release in their home waters in the Yarra till they measured 50-75mm, which takes 3-4 months on the rations provided by the volunteer workforce. Space is also a problem at the hatchery: they rear what they have space for. In a good year that will be around 10-20,000 fish. Any surplus small fish are passed on to Fisheries Victoria for restocking in suitable areas north of the Divide. NFA members have their reservations as to the survivability of the 0.7g fry when liberated in open waters.

This most recent season hasn’t been favourable. Late rains have kept the Yarra running full to overflowing, and the capture opening has been narrow.