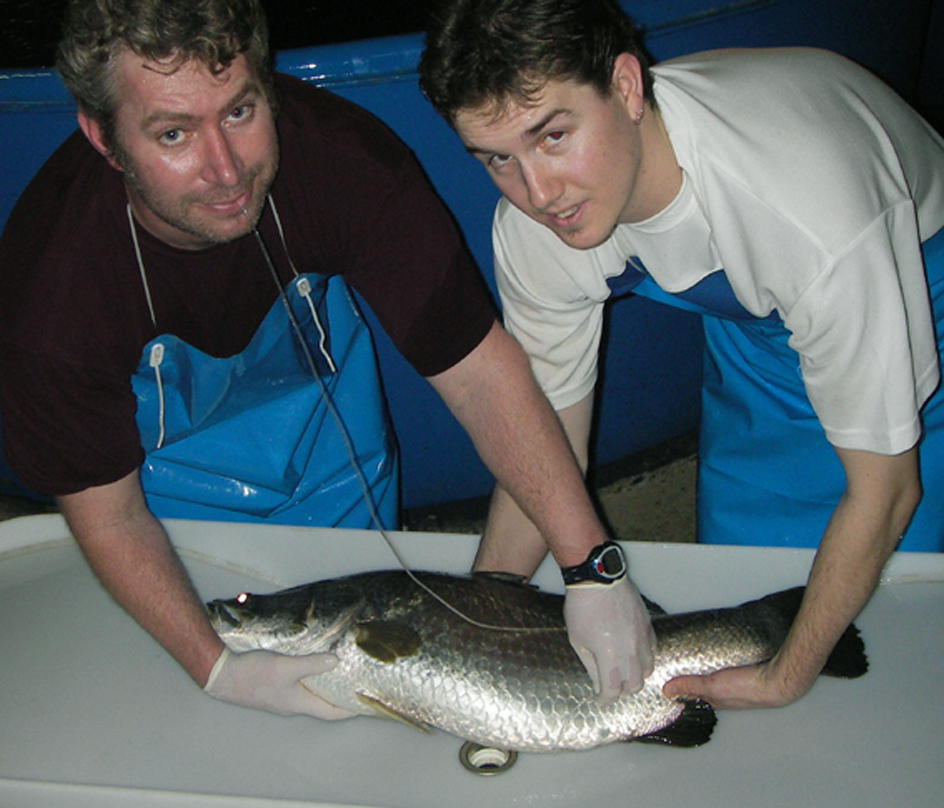 A new hatchery and a far-sighted R&D program puts this Australian barramundi producer at the head of the pack.

Back in 2007 the unreliable supply of barramundi seedstock launched Australia’s MainStream Aquaculture on a program that has brought them to a position of global leadership.

At their new $10-million hatchery located in Werribee on the outskirts of Melbourne they produce 30 million fry annually. Add to that the six million fry produced each year at their original North Queensland hatchery in Townsville and this progressive aquaculture company produces around half the world’s supply of commercial Lates calcarifer. They now export fry to 17 countries across five continents, with key markets in the Middle East, North America and South East Asia.

“There’s been significant growth in barramundi culture in the regions due to consumer acceptance of the species, and its suitability to intensive aquaculture,” said Managing Director Boris Musa. The rapidly growing interest in barramundi worldwide is also being driven by the demand for premium white-flesh fish that can be produced reliably by aquaculture. Currently 90% of such fish comes from capture fisheries.

“The race is on for a cultured white-flesh fish, and we believe barramundi is a very good candidate,” he added.

But the MainStream story isn’t just about increasing seedstock supply.  MainStream’s Head of Aquaculture and co-founder, Dr. Paul Harrison, looked at the situation from two perspectives, one as a hatchery operator and another as a hard-edged commercial fish farmer. He wanted seedstock that would make it easier and more profitable for him to farm, and to keep his operation at the forefront of industry development.

The first thing they noticed was the lack of variation in performance among stock from their own hatchery. This led to a selection program under the supervision of Profs Rocky de Nys and Dean Jerry of James Cook University that has seen a 20% increase in growth, a 10% increase in fillet yields, and a 30% reduction in growth distribution, which improves stocking efficiencies and reduces grading.

They have set themselves a target to double the average growth rate by 2020. Already some of the faster growing barramundi have reached that target, and given the rate of improvement thus far, Paul feels that they are on track to achieve that goal.

Operating the two hatcheries, and employing two separate breeding groups within those hatcheries, has boosted security of supply, and in effect given them four functioning hatcheries. The program has brought them more than improved standard barramundi: they have also isolated a golden barramundi strain that produces no melanin. The flesh of this line is a pearly white and doesn’t show the typical greying often found in white fish fillets.

Paul explained that having four separately maintained breeding populations means that they can always have two groups ready to spawn at any one time.

“We’ve been able to improve the security of our seedstock supply, and fast-track improvement. Commercially our priority is consistency of output both in timing and quality. Our clients enjoy knowing when their next lot of fry will be arriving.“

Most of the genetic work is performed at Townsville based on the results from the Werribee recirculating aquaculture farm. The advantage is that being able to control and monitor the environment more so than in an open system, they are able to maximise the genetic potential, and a obtain clearer picture of the benefits of particular breeding combinations. However, this doesn’t restrict MainStream’s seedstock lines to indoor systems.

In one trial, two groups of half brothers – the same mother but different males – were raised in a recirculation system and in ponds in Far North Queensland. The fish in the recirc system grew faster, but the difference between the two groups was the same – 30%.

“What we’ve been doing for many years now, based on that type of investigation, has been to mass spawn as many different combinations as we can create from our whole broodstock population — and there’s many hundreds of them.  Then we look at how the progeny go, [and] establish which parents produced the faster-growing fish. We’re then able to rank the parents as to their breeding value for that aspect. We know, for instance, which are the top 10 fish to pair together, and which are the bottom 10. One of the things we’ve found to be very effective is to take those bottom 10 strains out of the breeding population. As a result, our annual production has increased by over 20%. This is not even the result of selective breeding; it’s just selective pairing.”

“What our improvements represent is time to market,” Paul explained. “We’ve brought our average time to market from 44 weeks to 35 weeks for a 750g fish. There are some fish that we get to market in 25 weeks; they’re the superstars. But we’re getting more even populations now, and we don’t have those ‘trailers’ dragging back the average. We’ve dropped off those fish that were still in the shed at week 60, which are the ones that cost you money.”

“We select for fish that come from an established high quality family and individuals that have grown  100% faster than the average; in other words they’re phenomenal. From there we apply a condition index that measures length to width. We’re looking for something that is 20% wider than normal.  That’s giving us a 10% increase in fillet yield. We’ve basically selected the ones with the broadest shoulders. Our fish are not so much long and slender as rounded and thicker.”

Identifying and removing the bottom end of the spawn is also standard procedure. They grade at days 19, 21, 23 and 25, post-hatch, at which point the bottom 30% and the top 2-3% are culled.  This gives a tight conformation on the farm and reduces the number of times the fish need to be graded. Another advantage that Paul’s clients have reported is that MainStream fish are calmer. He feels that the tighter conformation means there’s less hierarchical activity.

The larvae are started on a rotifer diet and weaning begins at day-12. By day-21 they’re fully weaned. Any fry that don’t wean are removed automatically by the day-25 cull. They use a range of diets from different suppliers, but by day-30 all are on a single commercial formulation, only the pellet size changes. Brands used include Otohime, Lucky Star, and products from INVE Aquaculture and Skretting.

MainStream has two aims. Firstly to reliably supply their clients and their own farm with the best performing commercial seedstock that they can produce. Parallel with that, they’re developing genetic improvements through the Townsville R & D program, and tracking those improvements on the Werribee farm.

“We’re constantly looking for the best stock from which to breed, the best families and the best individuals, and bring them back into the breeding program,” Paul said.  “Our improvement strategy is a bit like a software program. We have a commercial product, the 2015 model if you like, and we’re working on the model that will be introduced in 2016. Each year or so the model will be upgraded.”

The hardiness and versatility of barramundi has been borne out by the range of conditions in which they are being produced. These range from freshwater ponds to seacages in temperatures from 20 to 35ºC, and in salinities up to 42‰. Under trial conditions at MainStream’s Werribee farm they’ve run them up to 38ºC. The limiting factor in this case was dissolved oxygen; the fish still wanted to feed. Boris said this versatility made them a ‘future fish’. “As the world’s climate becomes warmer, the barramundi is becoming happier and happier”.

MainStream’s approach has been both scientific and commercial; and with futuristic planning, focussed research, and plain hard work, the company is set to reap a just reward.

The Sep-Art machine: Artemia cysts are hatched in the main tank and the iron-infused cysts are attracted to the magnets Paul is holding. Artemia nauplii swim into the centre column and are collected and fed to the larvae.

MainStream’s new seedstock facility at Werribee, a suburb of Melbourne, was commissioned in January, 2014. The design is based on knowledge gained from eight years operating a dedicated barramundi hatchery on the grounds of James Cook University in Townsville, Queensland.

The new building covers 500m2 and has four broodstock conditioning tanks, two larval rearing rooms (each containing 6 x 3m3 tanks and 7 x 2m3 tanks) a rotifer rearing room, and a fry preparation room. Plumbing is underground and the whole facility is alarmed and monitored. Nothing has been left to chance.

The separate 22m3 broodstock conditioning tanks can be adjusted to produce ovulating females to the company’s timetable, and also enables them to hold spare conditioned broodstock teams as a back-up to ensure a continuous supply to their clients.

Temperature control enables broodstock teams to be wintered (23ºC) and conditioned (30.5ºC). Hatchery Manager Daniel Lounden said they try to give each team a “winter” holiday from breeding, but teams can spawn continuously for 4-5 months.

Each section has it’s own bio-filtration system and temperature control.  The incubation water is filtered down to 1µm.  Filter screen sizes progress to 25µm and 50µm as larvae grow and toughen. All incoming water is screened and UV sterilized.  Each section has its own quarantined bio filtration system as well as particulate filtration and UV sterilization. Saltwater is brought from nearby Port Phillip Bay, filtered and sterilized in 3 x 45m3 tanks. Fresh water drawn from the farm’s bore is similarly treated before being introduced to the hatchery. The hatchery’s water quality is given unconditional respect.

Ovulation is induced with hormone injection. Barramundi are extremely fecund: 8-10 million fertilized eggs can be collected from a couple of 10kg females over two nights of spawning. The larvae are fed rotifers for the first eight days before being switched over to Artemia until day 21, by which stage they’re fully weaned onto dry rations. Artemia are separated from their cysts magnetically rather than by screening. The cysts are infused with iron, and the cast cysts are attracted to magnets in the hatching tank eliminating the need for separation by screening.

Several other innovations have been incorporated, including a MainStream-designed mixed-bed bioreactor. The larvae are initially reared in a marine environment (barramundi are catadromous) and changed to freshwater conditions later in the cycle. MainStream has conceived a way to seamlessly change the larval rearing facility from salt to freshwater water without having to check the larval rearing process in any way.