Late last fall, the US Fish and Wildlife Service working with its partner agencies, the New Mexico Department of Game and Fish and the US Forest Service, released two age classes of Gila trout into Mineral Creek ranging up to a foot long. 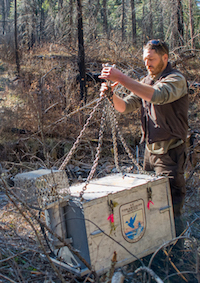 The rare yellow trout were spawned, hatched and raised in captivity in 2015 and 2016 at the Mora National Fish Hatchery. Hatchery fish are carefully paired and spawned to maximize genetic diversity of offspring, which provides a safeguard for their survival in the wild. The captive fish also face rigorous swimming conditions in the hatchery to further ensure their fitness when released.

These 1,033 trout traveled by truck eight hours to meet a helicopter at the Gila National Forest’s Glenwood Ranger Station. The aircraft made multiple flights carrying an aerated tank at the end of a long-line, each time full of Gila trout. Biologists from the three agencies had hiked in several miles in the rugged country to meet the trout and place them in the cool, shaded runs and pools of Mineral Creek.

Mineral Creek is tributary to the San Francisco River near Alma, New Mexico. Streams in this watershed harbor one of five known relict genetic lineages of Gila trout. The species lives only in New Mexico and Arizona along the Mogollon Rim, an area of conservation emphasis for the Service.

“This re-patriation into Mineral Creek adds another stream to harbor Gila trout, as outlined as a necessity in the Gila Trout Recovery Plan,” said Dean. “Not only does this add a population within the San Francisco River drainage, it also helps establish Gila trout populations across a larger geographical area. More Gila trout over a larger area adds greater security to this rare fish.”

That desired security will be achieved when the Mineral Creek population is reproducing naturally, and multiple year classes swim its waters, perhaps in 2018.

Mineral Creek came to the attention of biologists as a candidate stream to receive Gila trout following the massive Whitewater-Baldy Fire of 2012.

Destructive as it was, the forest fire made Mineral Creek suitable for Gila trout. The fire burned in the headlands of the stream and summer rains washed a slurry of ash and debris down its course, removing unwanted competing non-native fishes. Though the mountain slopes and post-fire streamside vegetation are not fully stabilized, sufficient habitat exists to harbor Gila trout. With so few suitable streams available to repatriate Gila trout, biologists seized the opportunity.

Mineral Creek Canyon is steep to be sure. It’s certainly among the more remote and more difficult Gila trout habitats to reach, but it’s not the only stream to receive Gila trout from Mora National Fish Hatchery this past autumn. Another 8,621 Gila trout have been placed in several other waters to advance the species’ recovery, and should entice anglers to go after native trout in native habitats of southwest New Mexico.

The trout lie in dark water behind boulders and in the scour pools beneath log jams, waiting for bugs to come drifting by. They also wait for what anglers may throw their way.

The Gila trout is protected under the Endangered Species Act. The species was first listed as endangered in 1973, and through conservation measures, was down-listed to threatened in 2006. A year later select Gila trout populations were opened to angling for the first time in 50 years.