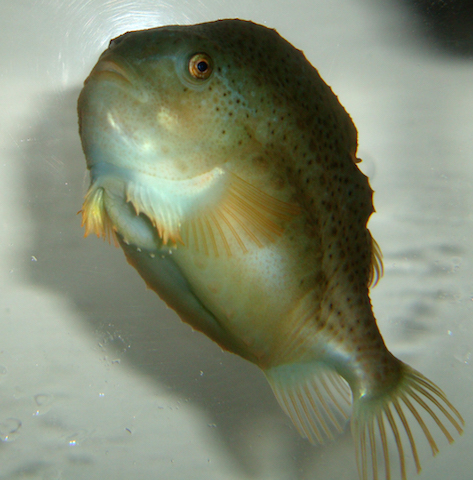 New homes provide the perfect setting for male lumpfish courting females and for the females to produce eggs.

The FAI Ardtoe Marine Research Facility in Argyll, Scotland has been successful in getting

stocks of hatchery-reared lumpsuckers to produce their first batches of viable eggs.

Dr Jim Treasurer, Research Director of FAI, explained that until recently eggs needed to be collected from wild adults when they entered inshore waters. New breeder fish had to be caught every year.

It was through a stroke of luck that the researchers were able to close the life cycle. During renovations the fish had to be moved from the old nursery to outside tanks. There was some anxiety about the effect this would have on their spawning, but according to Daniel Carcajona, who manages breeding stocks at Ardtoe, the team felt they “had nothing to lose.” So the fish were moved to new three-meter-wide, 1.5m- deep tanks, and provided with shade netting to protect them from the sunlight.

Carcajona explained that the new bigger tanks had flat bottoms, and a few “strategically placed” stones provided spawning territory. The new home was a hit and it wasn’t long before the males were stationed by the stones, waiting for the females to come by. Carcajona explained that lumpsuckers go through a courting process in which they lightly bump and rub up against each other. Within days the first viable eggs were collected.

“Our cleaner fish production and breeding program will move into its new premises this autumn and we expect to see improved performance from our hatchery reared lumpsucker broodstock next year,” added FAI Ardtoe managing director Dr Tim Atack. “This breakthrough makes the large scale production of lumpsuckers viable and sustainable…”

Lumpsuckers are gaining popularity in salmon farming regions such as Norway, Scotland and Canada as an alternative to wrasse for cleaning salmon of sea lice.