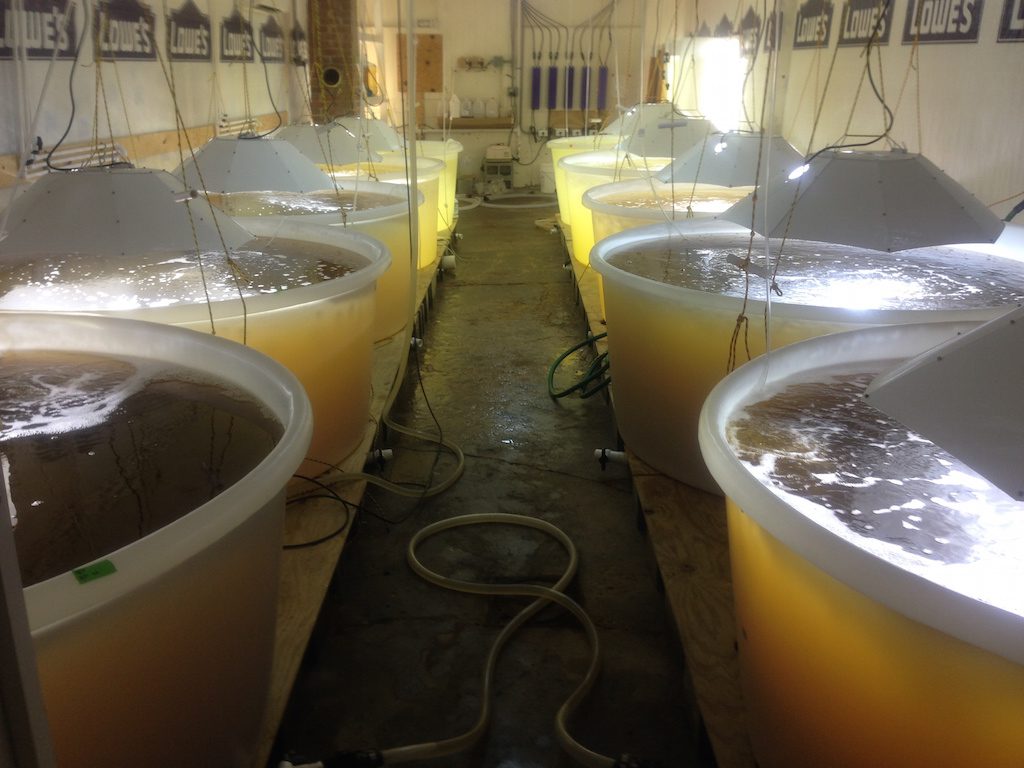 After completing his Masters degree, Mike Congrove worked as an extension agent for a shellfish trade association on America’s eastern seaboard. He was supporting small growers to improve their spat-on-shell production. The Aquaculture Genetics and Breeding Technology Center (ABC) at the Virginia Institute of Marine Science (VIMS) was providing larvae and seed, but there wasn’t enough and independent growers were having to buy out of state.

Shores and Ruark Seafood owner Rufus Ruark Jr., put together a hatchery company in 2008. He would take product for his growout operations but there would be lots left over to sell. Mike Congrove was hired to build and run the facility – Oyster Seed Holdings, the only independent oyster hatchery in Virginia. There are three other employees.

The hatchery is in a commercial warehouse that sits on a 100-year-old wharf at the mouth of the Piankatank River, on the eastern side of Chesapeake Bay. River water flows gently through a narrow channel between the island and the mainland and then mixes in with the tidal waters of Milford Haven. Salinity runs 16-18ppt most of the time.

The 5,000 sq. ft. building holds broodstock and larvae tanks as well as the continuous bag algae system. A 40-unit bottle nursery was constructed after a visit to the Shellfish Culture company in Tasmania.

“It helps us get more stuff ready earlier in the season,” says Congrove. “And the quality of the animals that come out is very high.” Up-weller nursery tanks are outside.

“We do fair amount of mechanical filtration,” says Congrove. “Most of our systems are single pass flow-through and we use mixed media to filter water down to 20 or 30 microns for the main floor of the hatchery. Water for larvae production, set and early seed, goes down to one micron mechanically and gets UV during the summer months,” he adds. The water that goes over to broodstock gets quickly filtered or in the cooler months, zero filtration. “We bring it straight from our water source,”

It’s a single-pass-through system but with some “hybridization,” Congrove explains. “We worked with consultant Jim Donaldson from the west coast when the hatchery was built,” says Congrove. “He put together a great hatchery for us, well designed and well though out.”

But some of the protocols are different. “Hatcheries that work with gigas (pacific oysters) can incubate the eggs and put them into continuous flow 48 hours later,” says Congrove. “What we have found is that virginica really hates going into the continuous system early in the larvae cycle.”

They saw terrible returns and poor quality larvae the first week after hatch. “We kept backing up how soon we put the animals into high density flow-through system and found six days to be kind of the sweet spot.” Congrove says. “We actually keep the animals from day 0 through to day 6 in static culture. Every 48 hours we retain the larvae, drain and fill the tanks and put the larvae back in.”

Broodstock comes in from ABC at VIMS in November and after a false winter of 30 days at 2 or 3°C, the animals are gradually warmed up to 23°C. “We try to grow them at least six weeks at that warm temperature and it puts us starting to spawn the first couple of weeks of February.” There is a three to four week period where they are stock-piling seed Congrove explains. “We get it up to a certain size and then hold it by bringing down the temperature and feeding it in a certain way to maintain health but not grow very fast.”

When water temperatures warm to 10°C in April, they start to send seed out the door. “Then it’s off to the races from April through to September.” says Congrove. The hatchery is shut for October and then they start again in November.

Hatch rates for their naturally mated triploids are less than straight on diploids, Congrove explains. “We average 45% and at times get 50 even up to 60%.”

Overall survival from egg to ready-to-set larvae ranges from 20% up to 40%. “Usually 30-40% early season when the water is perfect and the algae is usually pretty good,” Congrove explains. “As we go through the season that slowly declines and really this time of year (early July) it’s anywhere from 15-20%.”

Congrove says he is working to increase set rates. “Right now 25% to eyed and 25% to set is probably a good average,” he says. “We are strapped in the amount of larvae we can produce without expanding the facility so we are trying to be more efficient with our set rates and free up some of that larvae to go out as eyed larvae sales.”

“We have the capacity to do about a billion larvae,” says Congrove. Over the first six seasons they’ve hit that mark three times. “We are well on track to exceed our 100 million seed capacity this year with 110 to 120 million seed,” he adds.

“When we built the hatchery we were kind of assuming that 30 million seed was going to be about how much we could get into the market,” says Congrove. “But what has come along in Virginia and along the US east coast is a resurgence of people eating oysters and a huge demand in the half shell market.”

“The seed market has grown 20% each year for the last five years,” Congrove says. There is also potential for growth in spat-on-shell for the processing market, particularly given that an improving wild harvest has suffered several years of low recruitment. “The market is not satiated yet, every winter I get guys asking me if I have product to sell.” Mike Congrove hopes that will continue. Last fall he became sole owner of the hatchery.