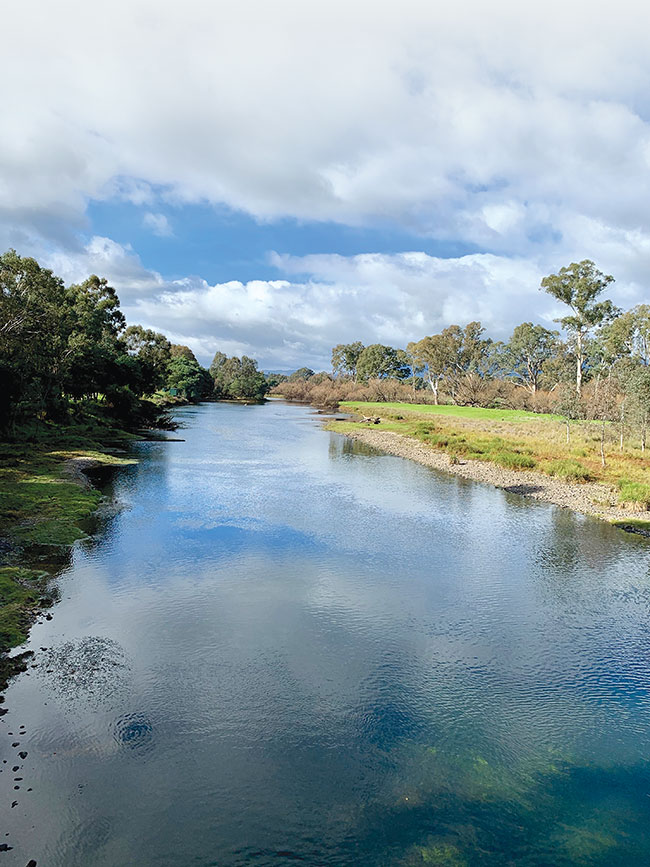 Goulburn River Trout (GRT) is one of the oldest aquaculture enterprises in Australia. Established by the Leake family in 1974 as an adjunct to their dairy farm, it was bought by the Meggitt family in 1990. It has been built up since then to become the country’s major producers of fresh and smoked rainbow trout (Oncorhynchus mykiss).

Situated on two sites on the Goulburn River, a short distance downstream from the Lake Eildon impoundment, the farms use a combination of gravity-fed and pumped water, depending on the river flow, to produce 1,000 tons of fish a year in flow-through raceways and earthen ponds.

While the operation is based on a high-volume, low margin model, which gives it market accessibility, the GRT brand has maintained its reputation for quality and reliability. Production is split evenly between smoked and fresh fish and although primarily marketed domestically, some product is exported.

Upgrade
To make life easier and for greater seedstock security, the company recently upgraded its hatchery at a cost of about a million dollars. As half its production goes to the weekly fresh fish market, regularity and reliability are key elements of the company’s production model.

The new hatchery has a very clean, simple layout. GRT director Ed Meggitt says keeping things simple across its operation has been a key to the company’s success.

One of the key elements of the hatchery is a small recirculating chiller incubation line that allows the hatchery season to be extended. Late season eggs eggs are incubated at a temperature of 3C to slow embryonic development.

Lengthening the spawning season is important for GRT as Australian quarantine laws prohibit the importation of eyed-ova from the Northern Hemisphere. Meggitt said he was supportive of this stance as it was an important tool in protecting Australian trout populations, which are free of most of the bacterial and viral diseases found elsewhere.

The spawning season at GRT runs from May through to early July, coinciding with the Southern Hemisphere winter. They require about 1.5 million fish annually, roughly 30,000 per week.

Go big
Trout are marketed at various weight ranges, from 300 grams (the traditional plate size) up to three kilograms sold as “king trout.”

Over the years, the demand for the larger trout has grown. “Fish in the 700g to 900g range have become very popular. They fillet beautifully and sell well,” Meggitt says.

“Doing large trout has only been made possible through very careful management of sexually maturating trout. No one wants to buy sexually mature fish. Their presentation and eating quality is poor. And importantly, from a farming perspective, sexual maturity , due to aggression, leads to a blowout in FCRs.”

In order to combat sexually maturing fish, GRT has a sophisticated management plan that uses different populations of mixed sex, all female and triploid trout, to ensure the highest quality of fish for the market. The efficiency and increased productivity of the new hatchery has made the implementation of the plan that much easier, while adding a layer of security to the operation of the farm.

A selection protocol has been developed at GRT over the years. “The fish are subject to a minimum of two grades over their life,” Meggitt says. “We always select from the biggest of the big. We select from various spawning batches – from the early fish to the late ones – and we’ll do a conformation check. Things like eye condition, gill opercula, fin confirmation. Over the years we reckon we’ve got quite a distinctive, silvery looking trout with good, uniform shape.”

Trophy fish
In recent years, broodstock have been “recovered” post spawning and sold to Fisheries Victoria to stock local waterways. The Victorian trout season closes for the winter and opens on the first Saturday in September. It has become a feature event for the district.

GRT’s spent broodstock are purchased by Victorian Fisheries from the state’s angling license pool and stocked in selected waters. The opportunity to hook into one of these trophy fish has become a key drawcard of the opening.

As Meggitt puts it, “Previously, the retired fish went to the market, where they were gobbled up by chefs for a fish stock base. We’re not getting a lot more for them but for our region, which is in the heart of the trout fishing waters, it’s been a bonanza.

“Fisheries did a study of the benefits of buying eight tonnes of these large fish from us and they said that the promotion generated an extra million dollars of economic activity for local businesses.”

The increased production from the new hatchery has helped GRT open new markets.

“Under the physical limitations of the old hatchery, we needed every fish we could produce to get all the way through the year to maximize our production. Now, with the increased production capacity, it’s given us the opportunity to exploit new markets,” Meggitt says. “We produce 200-gram fish for Fisheries Victoria for their family fishing waters stocking program and we’re able to help out other farmers who may have seedstock shortfalls.”

Trout being graded and harvested at the Goulburn River

Eyed-ova incubating in the chiller line at 3ºC

Eyed-ova incubating in the chiller line at 3ºC

Trout being graded and harvested at the Goulburn River

Poised for growth
The Fisheries program has been developed to get more people fishing. Ahead of the school holidays, ‘ready-to-catch’ rainbow trout are stocked into lakes around Melbourne and regional centres. The stockings are funded by recreational fishing licence fees and is part of the State Government’s Target One Million plan, initiated to boost angling as a community and family activity.

Speaking of the industry itself, Meggitt says it’s been a struggle. “We’re fortunate to be on a regulated waterway. Those on unregulated streams have found it difficult to keep going. The Millennium Drought (1996-2010) brought 15 years of below average rainfall and the Black Saturday Bushfires (February 2009) burnt out four farms and left streams without canopy cover. The riparian habitat and the soil structure is still recovering ten years later. Without summer shade, water temperatures can exceed upper critical limits during heat waves and the soil’s reduced absorption capacity has made flow rates less reliable.”

The commissioning of the hatchery completes the current development program of Goulburn River Trout, a program that has seen the company increase production by over three-fold in the last 25 years. With a modern processing and smoking facility, secure water from the Goulburn River and an experienced management team, it is regarded as one of Australia’s most efficiently run aquaculture operations.