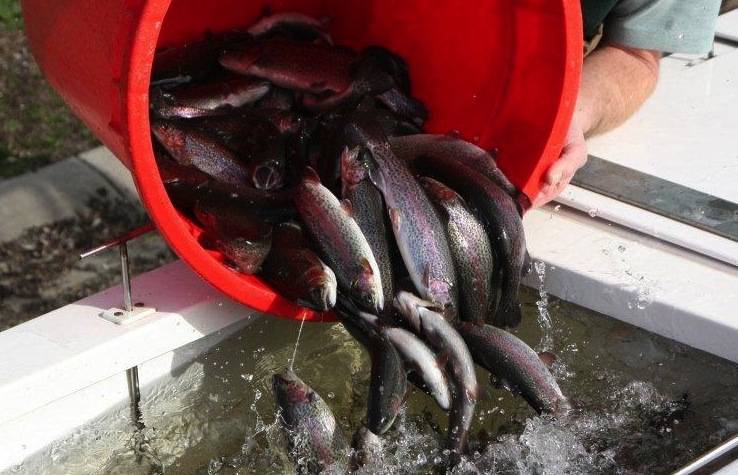 The early British colonists of Australia found intimidating the startling differences of this strange continent that had drifted away from Gondwanaland some 500 million years previously.

Some embraced the differences; others tried to make it a little England. Part of that revamp included the introduction of trout to fish, foxes to hunt, and rabbits to feed the foxes. All three proved to be environmental disasters. Only the trout have been put to economic use, although the families that survived hard times on rabbit stew might disagree with that claim.

Snobs Creek Hatchery was set up in the 1950s to produce salmonid species for anglers in the State of Victoria. Since then it has become the headquarters for Fisheries Victoria’s successful stocking and reclamation program for endangered native species, key native angled species, as well as brown – and rainbow trout and Chinook salmon.

In 2014 over 270,000 rainbow trout, 300,000 brown trout and 46,000 Chinook salmon are scheduled for release. Over 140 stocking sites have been designated, ranging from large irrigation storage reservoirs to ornamental lakes in urban parklands.

Most fish are liberated as >30g yearlings and >150g advanced yearlings but there are a smattering of 5g fry (5,000 in 2013) and about 2000 retired broodstock weighing over a kilo. The salmon are stocked in two designated crater lakes in Western Victoria. The trout are spread over impoundments and family fishing waters in the cooler parts of the state.

Snobs Creek itself is a permanent spring-fed waterway in the Upper Goulburn Valley. Its catchment is small and relatively free of agriculture. The hatchery is based on peak water diversion of 25Ml a day from the creek. Flow temperatures range from 4°C to 22°C. Over the summer months these peak temperatures affect salmonid culture by reducing feed rates and oxygen saturation levels while driving up the fishes’ oxygen requirements.

Higher temperatures also increase the speed of bacterial and parasitic life cycles while reducing the fishes’ ability to fight against these pressures due to increased stress. To combat these compounding issues, fish densities, DO levels, and water temperatures are monitored closely, and cleaning and disease surveillance activities are stepped up significantly.

Spawning the cold-water species commences in March. Triggered by 12°C water temperatures and 12 hours of daylight, the salmon lead off in late March to mid April. Traditionally the brown trout follow in mid May and the rainbows at the start of June. However, Salmonid Supervisor David Ambrens noted that in the last couple of seasons the rainbows had matured at the same time as the browns. Incubation times are approximately 580 degree-days for the salmon, 310-320 d-d for the browns and 280 for the rainbows. This meant that all the fry were in the nursery by the end of August. Fish are stocked into the raceways in November and December.

As day-length is the trigger for spawning, recent warmer weather is altering the balance between water temperature and daylight hours. David likes to see water temperatures under 10°C for the salmon eggs, and although the trout eggs can tolerate temperatures up to 12°C, it does compromise their viability to a degree. Farm Supervisor Steve Vidler said, a water temperature of 9°C would be like the baby bear’s porridge – just right.

Stocking gets underway the following April. Three sizes are released. Yearlings of 30g+, advanced yearlings of 150g+, and spent broodstock ranging from 1.5 to 3kg. Most of the mature fish go to the pond at the bottom of the spillway of nearby Eildon Weir as trophy fish for recreational fishers.

They select 1,200 broodfish of each species every year, and use half of them for breeding. The trout (both species) mature evenly. Selected randomly at two and a half years of age, they are bred at three. Of the 600 selected, 590 will be mature. The salmon mature over a period of six years. David said that as yearlings they can find 10% mature fish, all males, out of the 1000 randomly selected broodfish; half of the males mature as two year olds and 50% of the population matures each year for the next four years.

As the population of chinook salmon at Snobs Creek Hatchery is the only breeding population of the species in Australia they follow a broodstock conservation regime. They perform 200 individual male to female matings to ensure the gene-pool is kept diverse and the effective population size is maintained. Eggs from each pairing are incubated separately, and once they’ve eyed up, 50 eggs from each batch is selected to become the next spawning pool from that year’s cohort. This ensures a randomly selected representation from the available DNA.

Investment has been made in cost- and time-saving devices. One has been the Avotech automatic feeders. David said they save four hours a day on feeding; time that can be spent on other tasks such as record keeping and more important husbandry work. “We get a more accurate feed output as well, and by feeding through the daylight hours instead of two or three feeds a day we get better efficiencies.”

Bird predation is a serious problem, especially, as David pointed out, since the recent run of wet seasons saw a huge spike in population numbers. To counter this, robust anti-bird netting has been installed. Mounted on rollers, it can be winched back for harvesting and maintenance. “Now the cormorants can’t get in,” he said. “In terms of fish numbers, we lost 100,000 rainbow trout to predation in 2012. Then there’s the cost of man hours patrolling the raceways from daylight to dark.”

The salmonid stocking program is being undertaken to improve angling opportunities for recreational fishers. Part of the agenda for fish being released into family fishing waters is the removal of sexual precociousness as a growth issue so growth is more even across each cohort released. By giving female fry a hormone at first feeding they produce a fish that is genetically female but still produces milt. When this milt is used to fertilize eggs, the offspring are 100% female.

David said, “In 2011–12 we looked at the genetic diversity of the chinook salmon stock on site. Based on this study it was determined that we should undertake the conservation-based breeding program to maximise our effective population size to maintain whatever genetic diversity we have. In the late ‘90s trout genetics were also looked at.”

For over half a century now, the Snobs Creek Hatchery has been maintaining stocks of salmon and trout for Victorian anglers. During the recent bushfires that devastated the region, the hatchery was able to donate eyed eggs to trout growers struggling to re-build their stock. The work undertaken at Fisheries Victoria’s Snobs Creek facility is, in part, a direct result of recreational fishing licence fees used to improve fishing opportunities for anglers using Victorian waters.