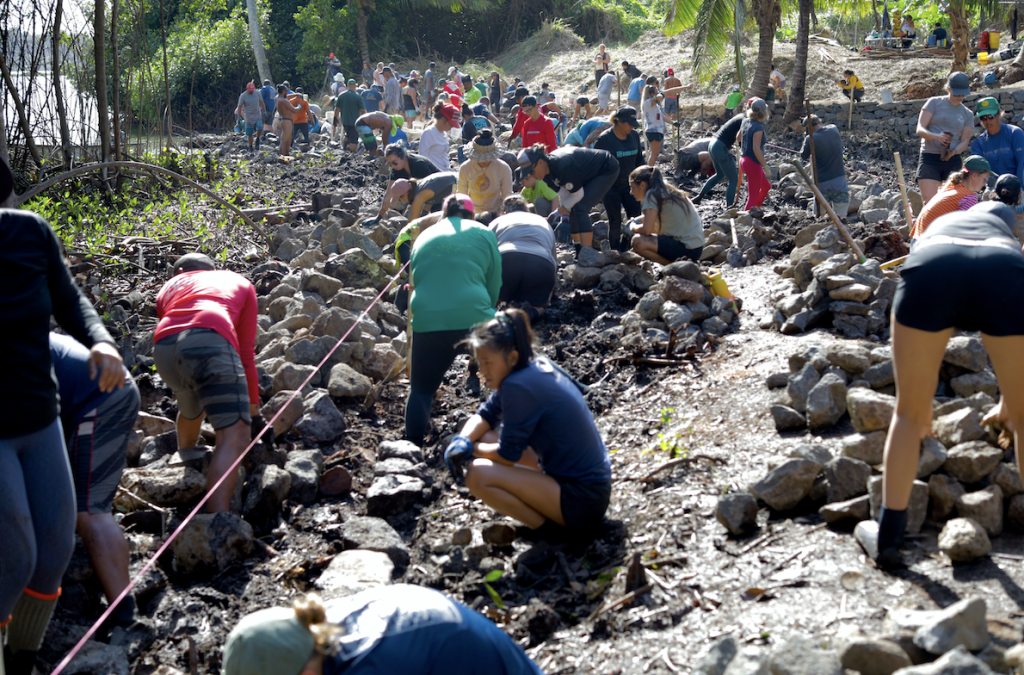 In his presentation, Keli'i Kotubetey explained how the community is helping rebuild and rehabilitate the stonewalls around the He'eia fishpond, one of the last remaining ancient fishponds in the island of Oahu.(Credit: Paepae o Heʻeia)

HONOLULU – Tradition meets technology at this year’s Aquaculture America 2020 in Honolulu, Hawaii, with plenaries that highlight the Aloha State’s ancient history in aquaculture and the continuing challenge of developing sustainable food production systems that can meet an increasing global demand.

“Our fishponds came to us by way of ancestral DNA,” says plenary speaker Keli’i Kotubetey, assistant executive director at Paepae o He’eia, a private non-profit organization dedicated to caring for He’eia Fishpond – an ancient Hawaiian fishpond located in He’eia Uli, Ko’olaupoko in the island of Oahu.

Ancient aquaculture in Hawaii can be traced back more than 1,500 years ago, where more than 500 fishponds were built throughout the Hawaiian Islands in an effort to grow fish and feed the people. By building stone walls to bring seawater, brackish water or freshwater in but trap and keep fish in the pond, and by culturing algae to feed the fish, the ancient Hawaiians practiced aquaculture that incorporated and maintained the natural order of the environment.

Today only 12 fishponds remain in Hawaii, and except for three that remain viable, most of the remaining fish ponds are polluted, according to Lilikala Kame’eleihiwa, Hawaiian historian and director and professor at the University of Hawaii’s Center for Hawaiian Studies. The He’eia and Moli’i fishponds in Oahu are among those ponds that are still fully functional and producing fish.

Both Kotubetey and Kame’eleihiwa called for the revitalization and clean-up of the Hawaiian fishponds, which could potentially produce 400,000 lbs of fish per year.

Alongside talks of revitalizing indigenous aquaculture for sustainability, innovation in aquaculture technologies are also on the agenda at this year’s conference. Dr. Neil Jacobs, U.S. assistant secretary of commerce for environmental observation and prediction, highlighted the National Oceanic and Atmospheric Administration’s (NOAA’s) initiatives that support fisheries and aquaculture, including the recent $5-million Sea Grant funding to explore research on aquaculture economics in the U.S.

Jacobs also addressed the challenges that come with permitting and government regulations for the aquaculture industry, saying “there is a market need for this.”

Keynote speaker, Jim Wyban, considered the father of specific pathogen-free (SPF) shrimp, said Hawaii needs to step up its game to reclaim its glory in the area of shrimp aquaculture and exports.

“Companies need to get their breeding game on really seriously and create animals that outperform,” Wyban told Hatchery International, a sister publication of Aquaculture North America.

Mainly due to the development and commercialization of SPF shrimp, Hawaii was once regarded as the world’s shrimp breeding capital, exporting $30 million worth of SPF broodstock per year. But with the emergence of the all pathogens exposed (APE) shrimp and new developments in shrimp genetics research, Hawaii could be losing out on new opportunities.

“Out in the industry, words spread very fast. Say, somebody in Hawaii develops a new strain of shrimp that did really well in China, it spreads like wildfire. So, that’s what they need to do.

“It’s a very competitive industry, you can’t cruise on your past success. You’ve got to be constantly improving. In shrimp breeding that means better performance in the farms, because that is where the final use is. How did the farmers do? Did they make money? If they make money it comes all the way back up the chain,” Wyban said.