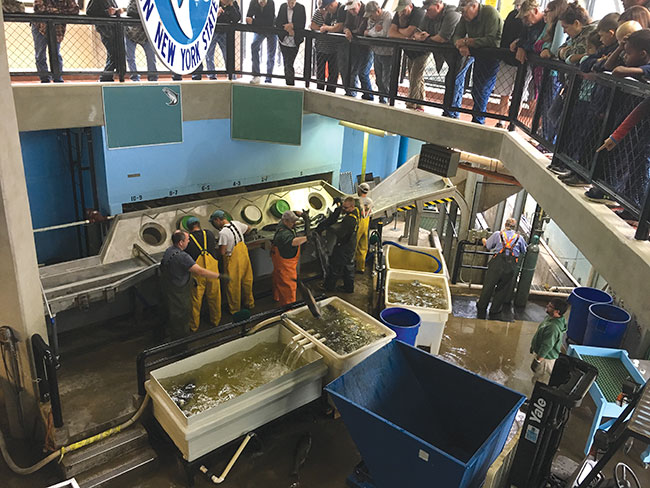 Visitors to the Salmon River Hatchery get a look at the spawning room during egg take. The hatchery receives roughly 50,000 visitors per year.

“There’s a fish ladder that comes up from the tributary that the salmon use to get into the hatchery intake. That structure is kind of collapsing on itself. So we’re hoping to replace that by next year,” Daley said in December. “That’s going to be a big-ticket item, probably over a million dollars alone.”

He hopes to complete this project by the end of summer 2020 but the majority of the schedule for the specific renovations is still being established.

“The other problem is that the hatchery is situated on a tributary to Lake Ontario, which is good for salmon returning to the hatchery, however, we have a really poor supply of good, cold, clean water, which is critical for raising trout,” said Daley. 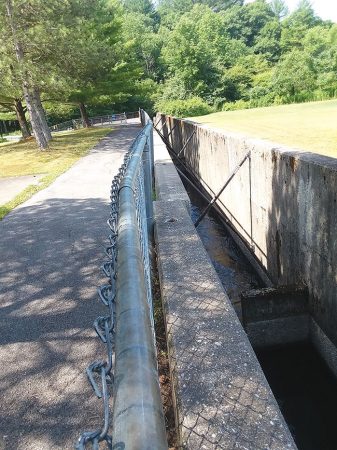 Currently supported by a temporary bracing, this fish ladder will be one of the first replacements undertaken at the hatchery.

The wells the hatchery currently draws from are plagued with iron bacteria, so a lot of money is spent on maintaining and cleaning those wells. One of the biggest infrastructure projects will be improving on those wells and looking for additional sources of well water, and the possible addition of water reuse systems.

Daley said the renovations will mostly be focused on allowing the hatchery to do better at what it currently does, rather than increasing the number of fish they stock.

“We’re hoping to have healthier fish and less reliance on chemical and fish treatments,” he said.