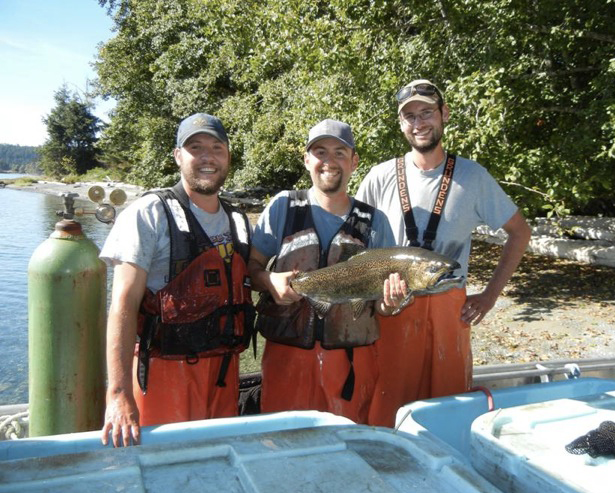 Yellow Island Aquaculture staff A group of seven university professors has been recognized for their collaborative work in native salmon culture that has resulted in the production of Chinook salmon (Onchorhyncus tshawytscha) that meet specific ‘organic’ standards.

Yellow Island Aquaculture, owned by John and Ann Heath, is one of the few remaining family fish farms in BC, and has been involved in aquaculture research and the development of stringent organic standards since its founding in 1985.

Initially the farm and hatchery had used conventional protocols for cultivating salmon, but John, in a recent conversation with Hatchery International, described how procedures changed in order to farm salmon without using antibiotics, and minimize the intervention needed to grow fish at high densities.

In those early days they were able to obtain wild salmon eggs and milt from the Canadian Department of Fisheries and Oceans (DFO). However, John’s brother, Dan, who was farm manager at the time, had a keen interest in evolutionary biology and felt it would be important to develop a breeding program through which fish would adapt to conditions on the farm, and which could be used for selecting specific traits for disease resistance, growth and survival.

So they obtained a licence to operate a hatchery and engaged a contractor to construct it to their requirements. Wild eggs obtained from DFO were incubated in Heath trays, and the incubation room, basically unchanged, is still referred to as the as the Heath building! Water is drawn via three groundwater wells from a large aquifer, which comfortably delivers up to 200 igpm (~900 l/m) and enables them to use flow-through for fish held at low density, and recirculation for experimental work when greater control of water quality is required.

Asked why they had selected chinook (also known as king salmon – the largest salmon species) rather than the more popular introduced Atlantic salmon (Salmo salar) John’s response was that Chinook are a native west coast fish and as such would already be adapted to West Coast environmental conditions and pathogens, and therefore be less likely to need antibiotics to control common pests and diseases. What’s more he noted that they would already be adapted to the foods naturally available on the west coast, from which the farm’s feeds are made.

Chinooks are also slower to mature than Atlantics and are therefore on the farm for longer. And unlike atlantics, they are semelparous (spawn once and then die), which adds an additional constraint to developing a broodstock in that broodfish can not be re-conditioned to spawn a second time.

Early results of growing fish at low density in sea cages offshore the hatchery were tolerably successful, and the fish did grow and mature, but with a high proportion of jacks, an which issue needed to be addressed. By this time Dan had returned to Academe, and enrolled in the University of BC, and some of the early research advice came from his contacts there.

The Heaths briefly explored the possible advantages of growing coho salmon (O. kisutch) and steelhead (O. mykiss), since DFO had experimented with administering testosterone in the feed in an attempt to slow maturation. But this slowed growth significantly, and prices were lower than for Atlantics, which made the idea unprofitable. This confirmed their determination to stick with chinooks, which, after all were aggressive feeders and would grow very large, even if the time needed to reach market size was longer. They also have a natural immunity to sea lice.

Initially, female broodfish were selected from among the 1-2% largest fish at harvest time, and isolated from the commercial stock. Male broodstock were developed by treating alevins with 17-α-methyltestosterone incorporated into the feed, which yields something like 90% male fish. (Note this is only used when the fish are very small). These males were again isolated from the commercial stock and used only for breeding.

Later, in 1997-8, after Dan had completed his studies and joined the University faculty, they were able to set up two distinct populations. The first consisting of domestic crosses only, and the second with some introduction of wild-sourced sperm and eggs crossed with the domestic stock. This project is still ongoing.

It has been Yellow Island’s intent from the beginning to qualify for “Organic” certification. Their early involvement was with the BC Association for Regenerative Agriculture and the Pacific Organic Seafood association, which issued the first “organic” standards in 1996. YIAL felt these were pointed in the right direction, but were not sufficiently rigorous. They believed that more fundamental research was needed which in turn required the scientific expertise and infrastructure found in the universities to solve some of the problems they faced.

Their initial attempts at raising fish in the absence of antibiotic treatment yielded mortalities from endemic diseases in the range of 65-85%. However by using wire-coded nose tags it was possible to determine which families of fish were surviving better, and so could be selected for breeding. The mortality is now down to 10-15%, which is acceptable since most deaths occur when the fish are small and before too much is invested in them. They are also selecting fish for higher growth rates using natural local marine food sources, and developing more sophisticated analytical techniques.

One of the ‘social’ criteria that John feels is important is the need to prevent any escaped hatchery-bred production fish from mating with wild stocks. This they have managed by developing their own pressure-shocking techniques for inducing triploidy, which renders the fish infertile; what John calls ‘bio-containment.’

The downside of this system, where eggs are subjected to intense pressure, a few minutes after they are fertilized, is increased mortality, which can be as high as 50% due to stress-induced fungal infection of the eggs. Simply picking dead eggs out of the incubator trays is largely ineffective because the act of picking increases stress on still living eggs and therefore contributes to the problem rather than solving it. Fungus in the incubators is therefore controlled by using filtered and U-V sterilized salt water at 25-30‰ in a modified flow-through circuit. Seawater is available on site.

They have also modified their tagging techniques. Rather than continuing with wire-coded nose tags they have switched to PIT tags, which more easily enable the identification of fish that die in the cages, and of those selected for breeding.

Their latest development is in the use of engineered spawning channels in broodstock development. A number of these have been built and are used to allow spawning fish to select their own mates. Rather than hand-stripping fish of eggs and milt, selected fish are placed in the channels and allowed to spawn naturally. Eggs are allowed to remain in the channels to incubate and hatch, and the alevins are collected at swim-up, and transferred to the nursery tanks. Already there is encouraging information after one or two generations. Interestingly, the presence of jacks in the channels improves the breeding performance of fully mature fish: more fry are harvested than when jacks are absent.