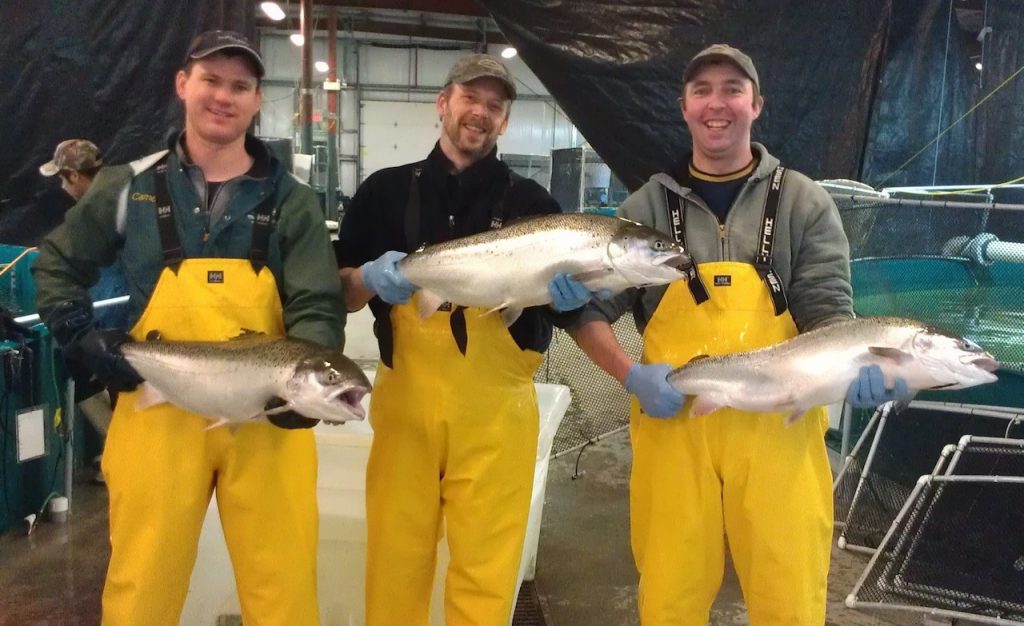 From 2004 to 2008 MHC grew 8kg-plus broodstock in a flow-through system at the former Kokish Hatchery at Telegraph Cove on Vancouver Island, British Columbia. In 2009 they moved to their current facility at Fresh Water Farms (FWF) in Duncan, near the southern end of the island. Here salmon are grown in a newly-built Recirculating Aquaculture System (RAS).

“The use of RAS came naturally to us since we helped pioneer its development and have been using various generations of RAS technology to grow salmon since 1988,” writes Gaskill, adding that the technology has advanced greatly over the past 26 years.

“We now rely on RAS for the majority of our smolt production (of up to 800 metric tonnes a year).” The work with smolt provided the company with the knowledge and experience to make a smooth transition to broodstock culture.

Over time they perfected the correct use of current velocity, lighting, water chemistry, and stocking density. The total annual production at FWF is now 100 metric tonnes with stocking density of up to 70kg /m3 for 4kg fish and 50kg/m3 for salmon at full maturity. The average live weight last year was 13kg. The company typically reaches a market size of 5.5kg in 15 months.

Gaskill acknowledges that fish farmers have taken a close look at the feasibility of growing more fish on land. But cost, environmental footprint, and animal welfare concerns have proven obstacles very difficult to overcome.

He notes that if you were to begin with “an excellent and ample well-water source that required little addition of dry buffers, and if you had fairly cheap electricity and could manage to grow your fish at densities of around 90kgs per cubic metre – which is six times the densities usually found in pens at sea – you might be able to produce a 5.5 kg salmon for round about the same operating cost as you get in the ocean. The catch is capital cost, space and ground water consumption.”

Gaskill estimates that a 1,000-metric-tonne land-based system would require a capital investment of around $20 million or some $20 per kilogram produced.

He says that by comparison, a typical 3000-metric tonne sea cage site, which can be built for roughly $5 million or a quarter of the cost, requires little space since it is three dimensional, takes no freshwater, and “runs almost entirely on natural tidal power.”

But it doesn’t have to be an either/or. Many farmers are taking the best of both. In the case of MHC, use of the closed system technology has accelerated their business as have the advancements made in sea cage technology. The company is well positioned for the Blue Revolution.