Singapore-based Pure Salmon is continuing its push to establish a worldwide network of sustainable, land-based salmon farms, with the announcement of a new facility to be built in Tazewell County, Virginia, in the United States, as well as two new potential locations in Europe. 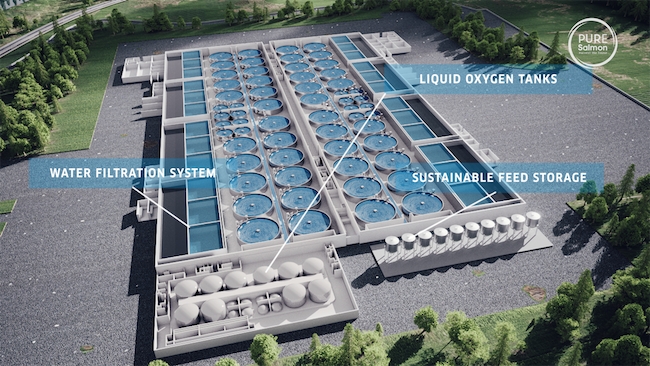 Rendering of the planned Pure Salmon RAS facility in the U.S.

The U.S. facility will add 20,000 tons in annual production to its existing RAS production facility located north of Warsaw in Poland, which currently produces 10,000 tons of Atlantic salmon annually. The U.S. project comes with a US$20-million financial assistance from local development agencies, according to a statement from Pure Salmon.

The company also plans to expand its European presence with two new locations being considered for development, which would contribute an additional 10,000-ton production capacity. The first site being considered is Boulogne-sur-Mer, a major fishing port on the northern coast of France with excellent connectivity within France and neighbouring countries. The second is Olbia in the north of Sardinia, Italy, a project which has attracted significant support at a national and local level, both politically and financially, Pure Salmon said.

The new European sites will be fully integrated with on-site hatcheries, grow-out systems and processing facilities.

“8F is proud to be a sustainable investment business and we are looking to change the future of salmon farming with our ambitious growth plans for Pure Salmon around the world,” Farouze added.

Last year, Pure Salmon announced a US$162-million investment to build a 137,000-square-meter land-based Atlantic salmon farm in Japan, with a production capacity of 10,000 tons per year. Dubbed, Soul of Japan, the state-of-the-art RAS facility will be the largest of its kind ever to be built in Asia, according to Pure Salmon. The Japanese farm is expected to be fully operational by 2021.

The facilities in Poland, Japan, the U.S. and France/Italy will comprise phase 1 of Pure Salmon’s roll-out plans and contribute a total 40,000 tons of production to its 260,000-ton global production target, the company said.

Pure Salmon is a relatively new player in land-based aquaculture, but is already making waves in the industry announcing its goal of establishing a global chain of land-based salmon production facilities.

“The expansion of Pure Salmon’s sites across the U.S. and Europe are part of the company’s aim to provide a socially responsible choice for consumers, the environment and the economy. The salmon will be reared in an uncontaminated environment with complete bio-security and will be close to areas of high salmon consumption, resulting in a longer product shelf life that is fully traceable and helps to keep carbon emissions and transport costs low,” the company said in a statement.

After a positive assessment of its first fully operational facility in Poland, Pure Salmon was recognised for its sustainable production processes and elected by FishChoice as an official Supplier Member. Pure Salmon will subsequently register all its future facilities to be launched globally on the FishChoice platform, the company added.

“Pure Salmon has also been recognised by Ocean Wise as being sustainably produced. As Pure Salmon complies with the highest standards of the Ocean Wise Seafood Program, it has been selected as a sustainable supplier and its products can carry the Ocean Wise recommended stamp, as an assurance of an ocean-friendly and healthy seafood choice,” the company said.