MIAMI – Amidst the heavy construction activities in and around Atlantic Sapphire’s Bluehouse project in Miami, Florida, U.S.A., somewhere in the vicinity, at least 800,000 Atlantic salmon eggs are safely tucked away inside its biosecure hatchery, getting ready to make their debut as the first batch of commercial grade fish to be produced at the Miami Bluehouse. 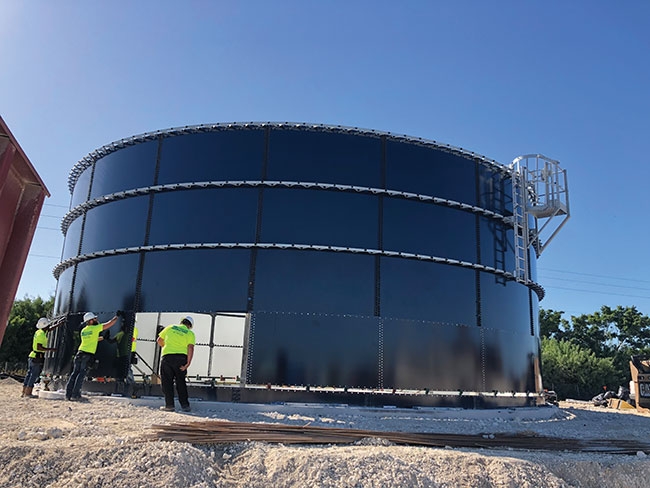 Phase one of Atlantic Sapphire’s ambitious 80-acre land-based aquaculture complex is currently halfway through construction and is expected to harvest its first batch of market-ready salmon by third quarter of 2020.

“Atlantic Sapphire’s vision is to evaporate the need for airplane (in transporting fish to market),” the Norwegian company’s chief financial officer, Jose Prado, tells attendees of the Aquaculture Innovation Workshop in December.

Providing an update on the progress of the Miami Bluehouse construction project, Prado says following the arrival of the initial batch off eggs – the first 400,000 arrived in late November – the company will be introducing new batches of eggs every seven to 10 weeks. The eggs are sourced from StofnFiskur from Iceland and some are also coming from Norway, Prado says.

“Depending on our final average harvest size, we will have over four million fish in the facility at steady state in approximately two years, those fish will be from eggs to four to five kilos,” the Atlantic Sapphire executive says.

Lessons from Denmark
The Bluehouse Miami project is drawing from experiences at Atlantic Sapphire’s Bluehouse farm in Hvide Sande, Denmark, which served as the company’s commercial pilot facility. Based on its Denmark experience, the highest mortality rate transpired in the first month at 10 per cent. The losses began to minimize as the process progresses, and is now at two per cent, Prado explains.

“The things we are learning from commissioning in Denmark is proving valuable for the project in the U.S.,” Prado explains.

The Miami Bluehouse project will be completed in three phases. Phase one is expected to be completed in 2020 with production capacity of approximately 10,000 tons. This will double to 20,000 tons per year by phase two, and up to 60,000 tons when the project is fully completed by 2026.

Atlantic Sapphire expects to produce around 9,500-tons of head-on gutted fish per year for phase one of the Miami production facility, translating to about 22 million lbs. of salmon annually, Prado says.

“The biggest factor in determining how many fish we will harvest out of 100 eggs is how many we grade out of the system. We are constantly grading, particularly in freshwater stage, and we are grading more fish than we are seeing in mortality.”

By the time phase one is complete, the Miami Bluehouse will house a total of eight independent water systems throughout the production system, six of which are dedicated for the grow-out section, with six tanks per water system, for a total of 36 large grow-out tanks, Prado says.

Water infrastructure
The Miami Bluehouse is located in Homestead, Florida, about an hour outside of Miami, about 15 miles away from the ocean. The facility makes use of the Miami aquifers for its groundwater infrastructure.

The 3200-ft injection well can dispose of 19.3 million gallons a day, according to Eric Meyer, the operations director at Miami Bluehouse. Wastewater is absorbed by the boulder zone, slowly flowing west to east.

“Eventually, thousands of years from now, it percolates in the middle of the Atlantic as saltwater. That is why we are here, because of our ability to dispose of wastewater at this scale,” Meyer says.

A monitor well is also installed, which allows the Miami Bluehouse to continue operations while complying with Florida state requirement to conduct water testing every five years. The testing usually requires the injection well to be shut down while tests are being done – which can be costly.

“What we do as an alternate is we constructed our monitor well, we can take testing and sampling from there. It’s good for the state but it’s also good for us because we want to take care of our (water source),” Meyer explains.

A 10,000-gallon hydro pneumatic tank is also constructed, which will serve as a pressurized water reservoir for the facility.

Degassifiers are used to strip the hydrogen sulfide (H2S) from the water before it is introduced into the farm. H2S runs about three parts per million in the Florida aquifer wells. There is also trace amounts in the Biscayne aquifer, according to Meyer.

“We can supply freshwater, brackish water, seawater quality, groundwater – and then we have a disposal zone, 3,000 feet down into a saline aquifer to dispose of our aquaculture wastewater.”

The infrastructure is built to allow cooling of intake water from 26 centigrate to between 14 and 15 degrees. Eggs in the hatchery live in 4-degree-centigrade water temperature.

A significant investment has been made on the farm’s humidity and other environment control systems. There is an enormous amount of energy required to constantly cool the water, says Prado. He estimates the farm would be consuming 8 kw per hour per kilo of fish produced. That’s two kw per hour more than Denmark’s consumption, taking into consideration the “Miami factor”, Prado says.

The cooling system is composed of closed loop cooling water wells, where the warm water will run through. Each production well will deliver more than 2,000 gallons a minute.

“As we continue deeper, we are going through roughly a thousand feet of confinement and we are going to penetrate the Floridian aquifer system,” explains Meyer. “We are producing from the UF-1 well, which is our upper Floridian well, located in the southwest corner of the property and has a water quality of about 3 ppt salinity.”

The UF-1 well will be used in conjunction with the MF-4 well – the middle Floridian aquifer well – which has water quality similar to seawater. “Between those two wells, we are going to be able to blend the water and send it into the farm for our farm operations,” Meyer adds.

Prado also assures the construction plans for the Miami Bluehouse project has addressed risks for hurricane and other natural disasters. “The general contractor has decades of experience in constructing year-round and their hurricane preparedness plans are very detailed and embraced.”

The company’s investments on back-up generators, for example, will allow the facility to operate up to four days on back-up power.

Being 15 miles from the coast, Prado says there is virtually no risk of flooding from hurricanes. “I was here after Hurricane Irma last year… everything around us was bone dry.”

The company recognizes the risk for strong winds, however, so made considerable investments to “harden the building for hurricane-proof construction,” to a category 2 range, Prado says.

“It is viewed across the stakeholders as responsible economic development,” Prado notes. Phase one is expected to create 100 to 150 jobs within the facility. The project is also expected to create up to 2,600 indirect jobs according to an independent economic analysis, the Atlantic Sapphire executive adds.

“We have a world-class team of architects and engineers, construction professionals,” Prado says. “At 90,000 tons build out, we will be impacting up to 21,000 jobs with a GDP impact of approximately a billion dollars.”

The Miami Bluehouse plans to open its facility to the public to showcase its state-of-the-art farming system. The second floor will include a public walkway platform where visitors can look down into the tanks, Prado says.

“Imagine the general public and the school children walking through the facility and getting a direct experience on how we are operating.”