Features Recirc
RAS is for girls

Early maturation in net pen farmed salmon was identified as an economic liability decades ago, and can still be a problem today. The ability to improve salmon growing conditions using RAS has compounded this problem. Indeed, optimal culture conditions for salmonids in RAS is still not clear. That was the message from a few presenters during the Aquaculture Innovation Workshop (AIW) held in Vancouver, Canada last November. In particular, it is still unclear what environmental conditions will minimize early maturation in salmon grown to harvest size in RAS.

Steve Summerfelt from the Freshwater Institute in Virginia, USA, presented a study by his group comparing maturation rates of two strains of Atlantic salmon grown in RAS under continuous light for 24 months post-hatch.  In this trial the Gaspe strain grew faster, reaching 4 kg. However, a serious challenge for the RAS farmer became clear in that greater than 50% of the male St. John River strain fish matured early.  The Gaspe strain were all females and no females matured from either strain. Could it be that RAS is just for girls?

Early maturing Atlantic salmon are called grilse, while early maturing Pacific salmon are called jacks (boys) or jills (girls). By the time the mature ones can be identified, the quality can be slightly or severely compromised, depending on how good the farmer is at identifying them early. During the maturation process pigment comes out of the flesh and pigment goes into the skin; oil content in the flesh decreases as energy goes into gonad production.

When determining what percentage of the fish are maturing early, the farmer must decide whether or not to grade out these maturing fish. Additional labour is required to grade, and there is an additional handling of the fish with the associated stress and reduced feeding. If the farmer decides to leave the fish and not grade, the quality of the maturing fish will continue to decline and they will start to die off.

Why do males mature early?

Maturing a year or two earlier than the rest of their cohorts is one of the mechanisms used by salmon to preserve their genetic diversity. In the early 1990s I remember learning about Chinook salmon known as “sneakers” in the wild. These are a very small percentage of males which sometimes stay in freshwater instead of going to sea. They mature at 50 grams or so. When the sea run Chinook return to spawn and a big female starts releasing eggs, the little 50 g sneaker darts in to fertilize the eggs before the male that is 500 times bigger. Genius. For Atlantic salmon, some males mature a year or even two years earlier than their cohorts.

Though many factors likely play a role in determining the timing of maturation in salmonids, four significant factors are genetics, temperature, photoperiod, and sex. Longer term breeding programs can decrease the percentage of early maturing fish. Farmers growing salmon in RAS can work with their egg suppliers to incorporate that selection into their genetic breeding programs. When considering possible shorter term solutions, by controlling the other three factors (temperature, photoperiod, and sex), early maturation can be minimized or eliminated in RAS. Here are the three key options:

• Temperature - Lower temperature can help, and in RAS, any temperature can be set; however, the farmer must be aware of the risk of compromising growth by lowering temperature. At the Aquaculture Innovation Workshop Garry Ullstrom from Kuterra described their RAS for Atlantic salmon grow-out in British Columbia: Early production cohorts had maturation rates of more than 10%. They were able to decrease that rate down to 2.3% by changing three things: 1) decreasing the culture temperature from 15ºC to 13ºC for part of the production cycle; 2) decreasing water turbidity which may have allowed for better photoperiod control; and 3) restricting feeding.

• Photoperiod - Net pen salmon farmers use lighting over the winter to reduce maturation. For RAS grow-out, studies still need to be done to optimize photoperiod. At the workshop, Colin Brauner from the University of British Columbia presented results on the effects of photoperiod and salinity on maturation in both Atlantic salmon and coho salmon grown in RAS. His group found that after growing Atlantic salmon in RAS for 10 months from smolt, maturation was 25 - 30% using 24 hour lighting. They were able to significantly reduce that by using a 12:12 photoperiod. Salinity (2.5, 5, 10, 30 ppt) did not impact maturation. With the same culture conditions, coho maturation was 1 - 1.7% using 24 hour lights and zero under a 12:12 photoperiod. Note that the coho were all females and feeding was restricted in both trials.

• Sex control -Trials producing monosex female salmonid populations were first carried out in the 1970s using several species including rainbow trout, chinook, coho, and Atlantic salmon. Female populations may solve the early maturation problem for Atlantic salmon grown out in RAS, though owing to limited availability of monosex female stock, this solution is yet to be realized.

For coho, all-females are already being cultured in RAS with no early maturation. . . or maybe it’s all early maturation: With all-female coho using optimal temperature and photoperiod, the entire population can be pushed to reach harvest size and subsequently mature just 18 - 20 months from first feeding. Essentially, all of the females are triggered to mature a year early (two year life cycle instead of three). Coho have a strong correlation between growth and maturation, where the fish that trigger to mature grow significantly faster than those that will mature a year later. In this case, it can be fruitful for the farmer to delay harvest until the meat and roe together are at peak value.

My recommendation for salmon grow-out in RAS would be to produce only monosex female populations and use a temperature and photoperiod profile that will allow you to control when the fish mature. I suppose that I could have added “reduce feeding” as another factor that controls maturation, but I hope that the industry can fine-tune the other facts and avoid that one. One thing that is clear is that much more research needs to be carried out before we understand optimal culture conditions for salmonids in RAS. 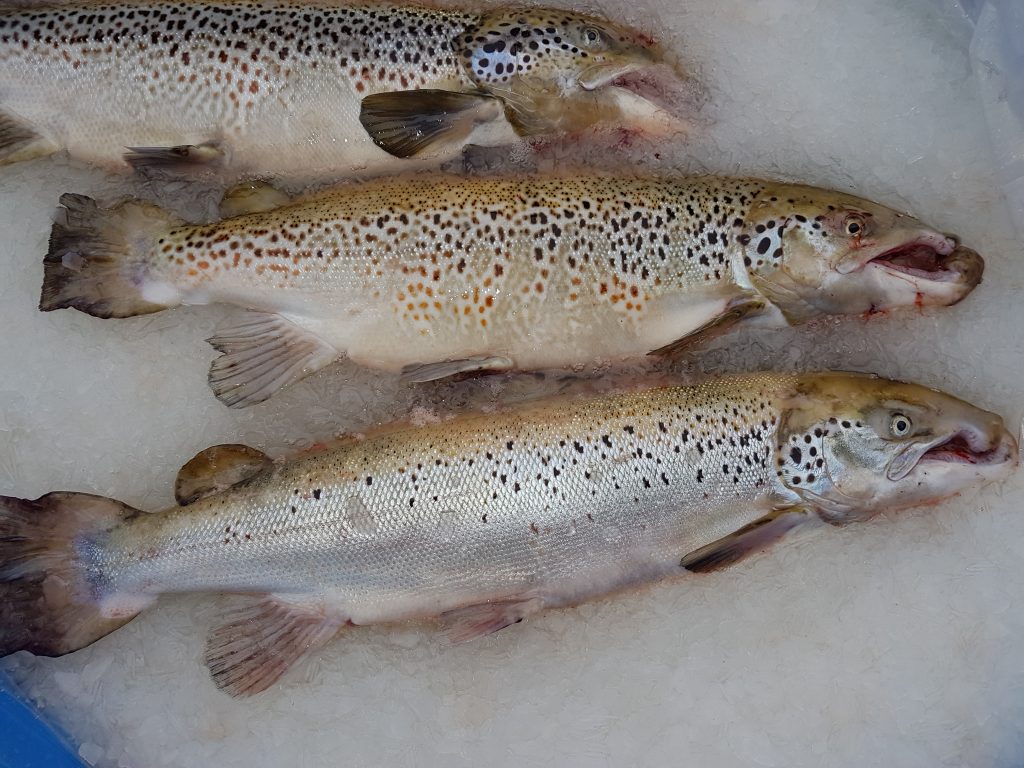 Male Atlantic salmon like these can mature prematurely in RAS. It is easier to prevent early maturation by using all-female stock.
Print this page