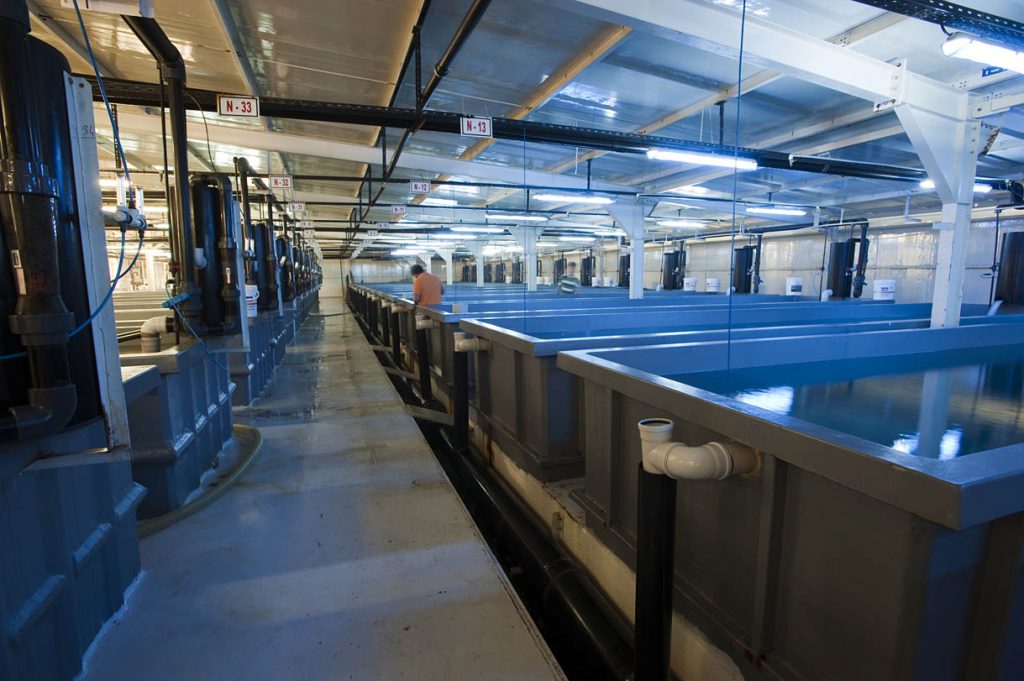 Hatchery International contributor Türker Bodur visits the AKVA-TEK Hatchery in Turkey and explains how the company has evolved since its founding in the early ‘90s.

I was fortunate when studying for my BSc in Aquaculture because my father was a fish farmer. This gave me an understanding of the industry and some credibility when the time came to introduce myself.

I remember visiting hatcheries with my father, and in particular recall my first visit to AKVA-TEK. I did not know then that I would one day be conducting my MSc thesis experiments in this very hatchery.

Dr Güngör Muhtaroğlu, owner of AKVA-TEK Hatchery Co, is one of the first people to hold a PhD in aquaculture in Turkey. He was inspired to build a hatchery in 1992 after his experiences both abroad and in the first commercial sea bass hatchery in Turkey.

AKVA-TEK was established in 1993 in the Izmir region on a 700 square meter piece of land. The goal then was to grow 150,000 sea bass fry. Three years later the hatchery had grown to 2000 square meters, and by 1998, had started to produce gilthead sea bream.

In 2004, the hatchery started to use recirculating (RAS) technology. I remember people saying that AKVA-TEK was a model for Turkish marine fish hatcheries. People who worked in the hatchery gained such great experience and improved their skills to the extent that many were sought by industry head-hunters.

AKVA-TEK built a new hatchery in 2011 at Dikili, Izmir on 6000 square meters of land. In addition to the production of sea bass and gilthead sea bream, the company was now growing red porgy, dentex (since 2004), meagre, umbra and clownfish (since 2009). The current goal is to produce 30 million fry in total.

Dr. Nedim Yazıcıoğlu, general manager of the hatchery, is proud to say that AKVA-TEK is the first hatchery in Turkey that started a selective breeding program. It is now five generations old. In addition, the R&D department has been working to produce tuna, greater amberjack and white grouper. The goal is to improve production with these three new species over the next three years.

AKVA-TEK is the first and only hatchery which produces clownfish in Turkey. They have eight different varieties of clownfish, Amphipron, ocellaris, including a cross bred clownfish that is unique to AKVA-TEK.

Dr Yazıcıoğlu confirmed that RAS saves energy and provides a more controlled and profitable production line. The hatchery uses all new technologies in the production process to reduce human error and ensure the welfare of fish larvae. Production and water quality are controlled by automatic oxygen and pH control systems, heat-pumps, and ozone systems that will detect any failures in the hatchery.

I was impressed when I visited the live food section consisting of algae, rotifer and artemia units. In the algae unit, the company uses a photo-bioreactor which is a transparent horizontal tube system. Algae pass through the tube which includes dissolved carbon dioxide.

After collecting eggs from broodstock tanks and incubating them in dark larvae tanks, 8 metric tons in size, the larvae are fed with live food before being transferred to the nursery tanks which are raceways. Deformation rate is reported to be lower than 3% .

There are 35 employees working in the hatchery, but the company needs more qualified and experienced aquaculture engineers. Finding qualified engineers is a challenge faced by all 15 aquaculture facilities in Turkey. Indeed, if the aquaculture industry in Turkey is to continue to grow, aquaculture education in Turkey will need to provide the programs necessary to support this growth.

Dr. Yazıcıoğlu explained that they aim for quality and environmentally sustainable production; AKVA-TEK is one of the first hatcheries in Turkey which has GLOBAL GAP and ISO 22000 Certificates.

Türker Bodur, Ph.D. is with Akdeniz University, Department of Aquaculture, Antalya –Turkey. After six years industrial experience, he has been working at the university, specializing in selective breeding programs and fish nutrition.