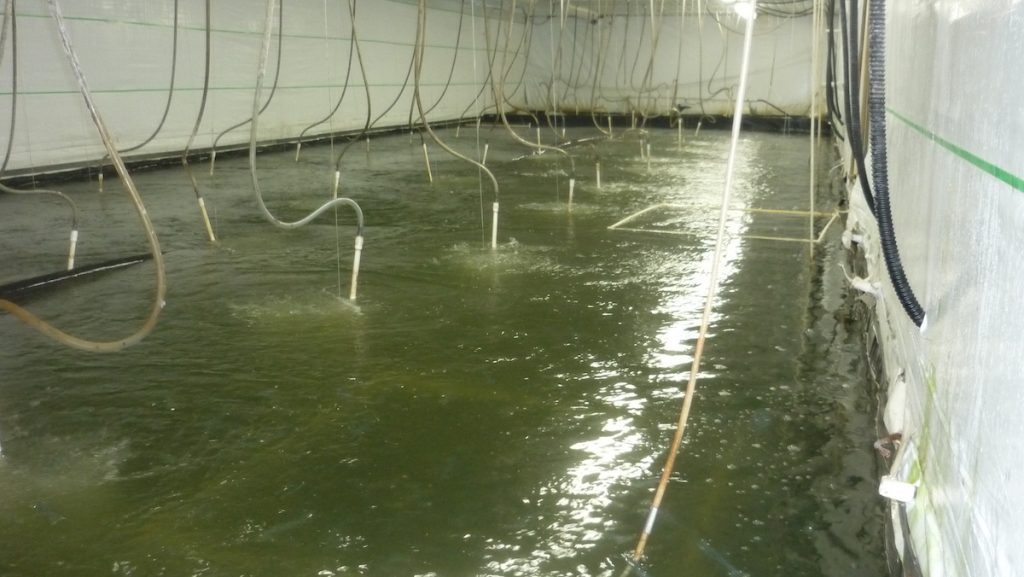 Commercial-scale shrimp farming has been pursued by many companies, with very few success stories. Spending years in the industry, Bill Williams has seen many companies come into existence, have some short-term success, but eventually fall into bankruptcy.

That is why Natural Shrimp, based in Texas, U.S.A., has been a long-term effort, in order to ensure that all the potential kinks have been accounted for. The end result, Williams says, has the potential to revolutionize shrimp farming.

“Shrimp is the biggest selling fish in the world and it’s a huge market,” says Williams who is the CEO and co-founder of Natural Shrimp. “But to our knowledge, no company has ever been able to develop an enclosed recirculating shrimp system like we’ve developed and make it successful. We’re the only ones that we know of that can grow shrimp and keep them indefinitely in an enclosed system.”

Growing pains
Eighteen years ago, Williams was partnered with Gerald Easterling, working on recirculating system technologies. They had developed a couple of successful systems when Thomas Untermeyer, then at San Antonio’s Southwest Research Institute, approached them to discuss an enclosed recirculating shrimp system which he was having difficulty with. Williams and Easterling were intrigued.

“We thought it was a great idea, because growing shrimp in an enclosed system and being able to grow them anywhere in the world is a tremendous marketing approach,” says Williams. “We did not know how difficult it was going to be to do that.”

The three soon founded Natural Shrimp and have been in various stages of production ever since. They have grown thousands of pounds of shrimp over the years. But three years ago, they ceased production to focus on refining their process and truly figure out a way to make the system viable.

“The problem we had was we were inconsistent with our growth patterns,” says Williams. “When you go to market your shrimp, marketing isn’t difficult at all – you literally can sell all the shrimp you can grow. But if they can buy it one week, you’ve got to be able to sell it to them again in two weeks or a month. You have to have shrimp available, and that’s where we had a problem, that’s where everybody has problems, because they can’t control the growth cycles of the shrimp.”

In order to make a commercial shrimp farm economically viable, Williams says, it has be grown on a large enough scale. But once the volumes start increasing to that degree, problems start to arise.

Bacteria is one problem, but that is easy enough to control. The real problem, he says, is ammonia – more shrimp means more waste and more waste means more ammonia.

“It’s very toxic. If you don’t get rid of it, you’ll kill those shrimp within a week. We knew what the problem was, but we didn’t know how to control it,” Williams says.

“In effect, we electrify the water. And if you do it properly, the electrification of the water creates chlorine out of the sodium in the salt water. The chlorine eliminates the ammonia, and then you eliminate all that by converting the chlorine into chloramine, which is a gas, and take it out of the system. It sounds simple but it’s very complex. And it works beautifully,” the Natural Shrimp executive explains.

At the company’s facility in LaCoste, Texas, they have a system with around 700,000 gallons of water which they have been using for all of their design and development work. Now after successful testing, their plan is to be back into full production by the fourth quarter of this year. Once in full production, the system will produce around 5,000-6,000 lbs. of shrimp per week. Then, they will begin to look at building additional facilities.

“We can put these systems anywhere we want them. We could go to downtown New York and put 30 to 40 systems in a warehouse space and we could supply the entire city of New York with fresh shrimp every week. We don’t have to be next to salt water and we don’t ever move any water or effluent back into the city system. It’s all recirculating, so we can put it anywhere. Rather than being outside of town on a farm, we can put them right downtown. All we need is a warehouse space,” Williams says.

Expansion
The chief executive says they will likely look at forming joint ventures in order to create facilities in other areas. Depending on the geography, one facility could supply shrimp for several states. The company also has a number of connections in Europe who may be interested in bringing the system overseas.

Williams truly feels like the company’s system will revolutionize shrimp farming, and even aquaculture in general.

“This is like the development of mobile technology or the computer. Nobody has ever been able to do this successfully over a period of time. My partner and I had been in a couple of other technology developments, but when we got into this, we thought it sounded like a great idea, but we didn’t have a clue how difficult it would be.”

He adds, “This is going to change the nature of aquaculture over a relatively short period of time.”


Related
French connection
In RAS, off-flavour is off-putting
Evolving to standardize
Dutch Yellowtail producer to set up RAS facility in US