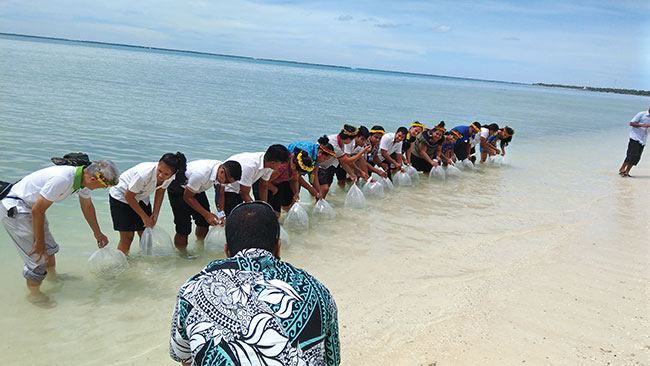 The South Pacific Island of Kiribati has been trying to develop its milkfish industry over the past 15 years thanks to its champion,  the Taiwan International Cooperation and Development Fund (ICDF).

The Milkfish Aquaculture Project is the latest technical cooperation between the Taiwan Technical Mission in the Republic of Kiribati and the Kiribati Ministry of Fisheries and Marine Resources. It began in January 2017 and will be in place until December 2021.

Mechanisms have been put in place to prop up the sustainability of the island’s milkfish industry. “[It covers] broodstock rearing, live food, feed, to nursery and pond grow out,” ICFD project contact in Kiribati, Chih-Chen Chen, told Hatchery International.

Large milkfish, sourced from local waters starting in 2017, were grown as broodstock. The end-of-the project target of 200 broodstock were collected in March 2019. Coming up with the number early on is important in keeping them on track to the 2021 target of 2,000,000 fry, Chen explained. As of the same period, 400,000 fry, 10,240 liters of rotifer medium and 44 tons of milkfish feed had been produced.

Training
The facilities to support the broodstock, hatchery and nursery operations were set up in the capital city of South Tawara. A fishery hub, it is the center of landings by commercial fishery.

Training and documentation of transfer of technology are also integral aspects of the project. Fifteen aquaculture training workshops have been scheduled, including the capacity-building on management of broodstock, breeding, feed and live food.

A manual and handbooks have already been produced and more will follow. These include: the supply and demand, production and marketing of milkfish fry in Kiribati; the management of milkfish broodstock breeding, milkfish fry propagation and live food and feed preparation; the cost-benefit analysis of milkfish farming; the current status of aquaculture species and their value chain in Kiribati; and the feasibility of milkfish cage culture in Tarawa.

The latter will involve building cages for milkfish cage farming.

Although ICDF manages the project, the agency also teaches staff from the Kiribati government the ins and outs of larval rearing.

“Milkfish are back to every island, like in the old days when they are easily found everywhere,” said Chen.

The Milkfish Aquaculture Project was launched on the strength of 200 broodstock.

History
Kiribatis’ history of milkfish farming goes back for centuries, when every island council had a milkfish farm. The ensuing years of marine resource and environmental degradation, and absence of effective management have taken a serious toll on both its wild-caught and farmed fish.

Milkfish farms were known to have an unstable supply of fry and a lack of adequate facilities to support artificial breeding and food production.

Taiwan has become an important champion for the revival of Kiribati’s milkfish industry.

In 2012, an aquaculture milestone was reached when milkfish broodstock spawned naturally at the Taiwan Ambo Aquaculture Station, the first occurrence of its kind in Kiribati.

The following year milkfish fry was produced through artificial breeding for the first time. This made Kiribati the fourth country in the world to have accomplished this feat. The other states are Taiwan, the Philippines and Indonesia.

This was the time when the island’s milkfish aquaculture industry was restarted.

Kiribati waited for such breakthroughs for a very long time. More than four decades ago, a government-funded 80-hectare fish farm was constructed for growing baitfish for longline tuna operations and providing a source of protein for the people. It didn’t take off, however, because of grassroots problems such as unsustainable supplies of fry and lack of fish feed.

These concerns have been and are being addressed by the cooperation project with ICDF.

According to Food and Agriculture Authority estimates, the Kiribati milkfish aquaculture industry produced two tons in 2016.

Oceanic tuna is the country’s most economically valuable aquatic commodity. The country has some of the world’s richest tuna fishing grounds.