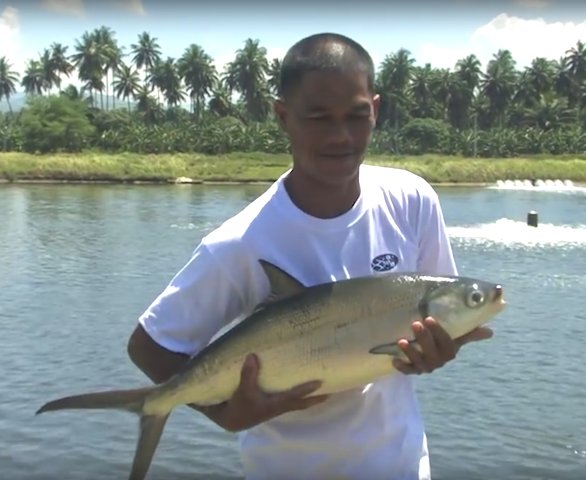 In the 1990s a Philippine conglomerate with an agribusiness division had a contract growing shrimp for a multinational partner. The contract, however, did not meet expectations and the shrimp farming enterprise came to an end.

Since the facility was already there the next move was to convert the 28 hectares of ponds previously used for growing shrimp into ponds for milkfish culture.

Locally known as bangus (Chanos chanos), milkfish is the national fish and loved by Filipinos everywhere, who cook it in every possible way: fried, smoked, steamed, stewed, baked, grilled, boiled or smothered in rich sauces. Needless to stress, the demand is always high.

The venture was so good that operations expanded to fish cages.

To sustain the growth a large and steady supply of fry and fingerlings was required. At that time, supply was sourced from the wild, which was erratic and seasonal. Imported fry from Taiwan was an option but were deemed “expensive and impractical.”

Rather than continuing to view the situation as a problem, the conglomerate saw this as an opportunity. Finfish Hatcheries Inc. (FHI) was established in 1996 as part of the Alcantara Group (AG)’s agri-business unit.

It was launched using local technology and the “best 60 milkfish breeders available.” Unfortunately, they didn’t produce the golden eggs; 30% of the fingerlings were defective, with many being blind.

FHI sought the assistance of Taiwan aquaculture experts for alternative technology. This paved way to the successful launch of “premium quality Sarangani fry” and within a span of only six months of operation, FHI was able to produce 120 million milkfish fry.

The next move was to lose no time in expanding its hatchery operation to meet Philippine demand.

A man of vision

Those who are aware that FHI is a member of the Alcantara Group (AG) would not be surprised to hear of its proven track record of resiliency and success.

The founder, the late Conrado Alcantara, went from Manila to Mindanao in the mid-1950s to start a small logging firm. With his vision, AG has grown into a diversified company with investments in energy and power, securities, land and property, timber, agriculture and mining.

FHI National Sales Manager Renato Bocaya told HI that they produced 600 million fry in 2015, which is equivalent to 30% of the country’s annual demand of two billion fry.

The sprawling 50-hectare hatchery farm is located in the town of Malapatan in Sarangani Province, Mindanao. The ponds are irrigated with water from Sarangani Bay, which is known for its rich marine life.

Seven hundred breeders, with 1:1 female to male ratio, are stocked per half-hectare ponds, which yield two to three kilos of eggs every day. One kilo consists of 750,000 eggs. The hatchery’s 12,000 milkfish breeders are the largest stockpile in the Philippines.

The ponds are constantly aerated to allow eggs to float on the surface.

The harvested eggs are relocated to the hatchery and fed algae and rotifers. They are then brought to growout ponds.

“Fry are harvested for distribution once they reach 21 days,” said Boyacá. “Our fry’s survival rate is 80 to 90%,” he added.

It is likewise a big plus factor that since FHI hatch and raise their own fry and fingerlings, every delivery is guaranteed free from predators that often accompany wild-caught fry.

Another advantage of the fry is that FHI grades its stocks to provide growers with fry of uniform size, and gives them leeway to choose the fry size according to their budget and harvest lead times.

Demand for milkfish fry never goes down, but environmental factors have been affecting FHI output. Production of 600 million in 2015 was a drop of 25% from 800 million in 2014.

“The reason is climate change. Because of the heat, the breeders have problems spawning,” Bocaya said. The ponds are out in the open.

“Quality, however, improves because the weak die and the strong survive,” he added.

In addition to milkfish fry, FHI also has hatcheries for mangrove jack, grouper, pompano and seabass.

FHI is also into growout operations, maintaining 400 hectares of brackish water ponds – the largest milkfish growing and processing operation in the country, making it a full-cycle aquaculture facility.

Another 200 million milkfish fry are produced by other hatcheries in the Philippines. The total, however, falls far short of the two billion annual demand.

The shortfall is filled by the Indo fry ̶ milkfish fry imported from Indonesia. The cost is P0.05 (US $0.001) lower than FHI’s P0.40. The difference adds up in an industry where orders are placed in the millions of pieces.

It has been said that the Indo fry has low survival rates. One of the factors attributed is the high stress level triggered while deliveries are in transit. It was also cited that sizes of Indo fry per batch may sometimes be mixed because they are sourced from different backyard deliveries.