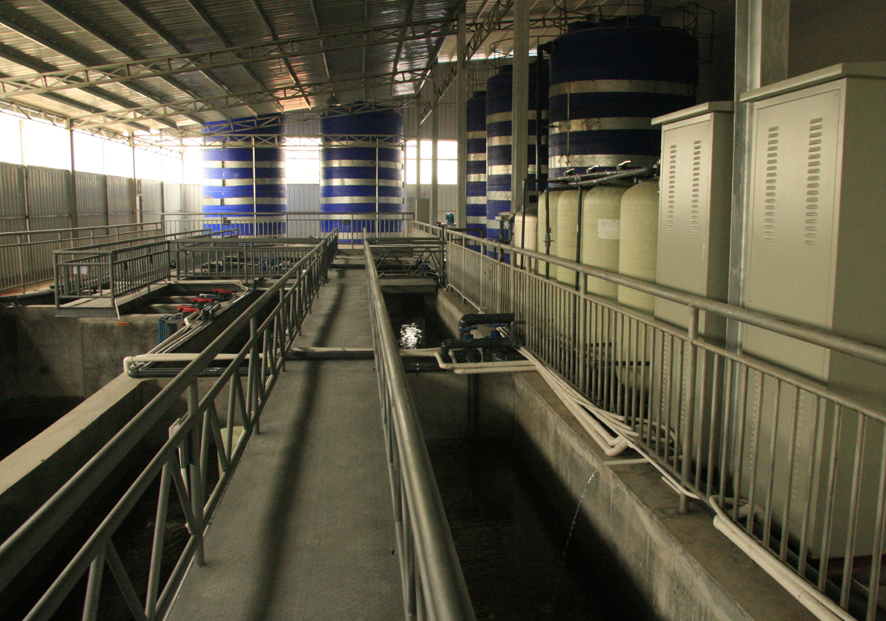 Part of the water treatment system at Dongguan. The blue and white tanks are for conditioned water storage. The cream coloured tanks are the sand filters and the raceways are for additional settlement. The bio-filter medium consisting of bagged oyster shells is at the far end of the raceways. Santai Eco-fishery

Santai Eco Fishery is an aquaculture operation at the forefront of fish production. Based in Hong Kong and operating in Dongguan, Mainland China, the company has built a recirculating aquaculture system (RAS) capable of producing 360 tonnes of fish a year.

The company has focussed on jade perch (Scortum barcoo), an Australian species found in the Lake Eyre Basin of Central Australia. These are a hardy, fast-growing fish that are extremely high in Omega-3. At the recent launch of the company’s product in Hong Kong it was served in several styles, but by far the most popular was sashimi. The fish are delivered live to the Hong Kong wet markets each week.

Santai Eco Fishery’s CEO, Terence Wu, said that now the company has established a market awareness for its fresh fish, other species are on the drawing board. The company also plans to expand on the site where they are now, and to take their controlled environment fish-farming model throughout China.

“As extreme and unseasonal weather hammers the planet in ways never before recorded, it’s becoming more and more difficult to produce fish in open pond systems.” said Wu. “By going indoors we’ve removed that risk. We’ve also been able to increase the productivity of the fish. Most of the fry we stock are reaching market size of 500g in 5-6 months.”

The farm covers 2.4 hectares and has 28 production modules each holding 170,000m3 of water. Each module has six tanks – three on either side of a central airlift stack. The water is re-cycled through each tank once every two hours. Moved by airlift pressure, the water’s temperature stability is assisted by the heat transferred during this procedure. The perch’s optimum temperature range is 25-30°C, and even though Dongguan is in the tropics, winter water temperatures would fall below the optimum without this ‘free’ heat transfer.

The water passes through several treatment stages before it is considered sanitized enough to be returned to the fish tanks. There are two stages of biological treatment, aerobic and anaerobic, and any sludge that has got past the 35µm drum filters in the treatment stacks is removed and put through the sludge digestion tank. Water, once clean, is re-used in the farm. The water from the bio-filtration process is subjected to ozone & UV sterilization and is passed through sand and activated carbon filters. Bagged oyster shells provide an inexpensive medium for the nitrifying bacteria and create a natural pH buffer for the system.

Seedstock are purchased from Australia as well as from local stock imported earlier. The Australian seedstock have the benefit of genetic selection from a wide range of family lines identified from wild and domesticated stock over a number of years. This mix suits the farm. The local season finishes as the Australian seedstock becomes available in the southern summer, and vice versa.

The 20-25mm fry are stocked in the nursery tanks until they reach 5-10cm – this takes around 20-40 days – after which they are moved to the growout tanks. The fish are graded about 20 times throughout the growout process.

Feed conversion has been good. The average FCR for the farm is 1.2:1. As there is no species-specific feed for jade perch, even in Australia, they have been using formulations developed for barramundi and other marine species. As the farm’s Chief Operations Manager, Aloysius Lew, put it, “We’re very happy with the results that we are getting from the feed, but we know that with a species-specific ration we can do even better.”

Both feed conversion and growth rates – two critical KPIs – measure up to industry best practice. Wu said water quality standards have never been compromised at any stage, and the fishes eating qualities have been endorsed by the ready acceptance of the fish at the product launch.

Innovation has been embraced at Santai Eco Fishery. A fish ‘drafting’ raceway provides stress-free grading and helps purge the fish prior to marketing. All systems are monitored electronically and the office is linked to the operational sections of the farm by television screens. Hygiene receives high priority: entry to the farm is through a sterilizing chamber that automatically fits over-boots and ‘fumigates’ the workers as they enter the farm environment.

Santai Eco Fishery’s mission is to build an eco-friendly farm and to bring safe, healthy and fresh fish to their customers. They look very capable of delivering on that statement.