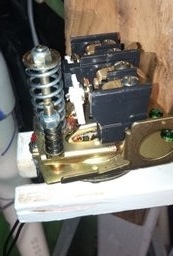 Have you ever asked yourself what events could take place that would result in dead fish at your facility? And then follow that up with asking yourself if those events would set off an alarm that would bring help before any stock were lost should they occur?

Over the years, we have tried a variety of alarms. Being a seawater facility, some simply didn’t stand up to the seawater. So we tried keeping the alarms separate from the ambient environment and the seawater itself.

But some alarms we tried, were not fail-safe. Like the current sensor alarm on a pump whose impeller broke. The pump motor was still turning and drawing current, even though the pump was not moving any water.

About five years ago, we felt the need to install an alarm on an aeration system that we consider critical. (Critical means if it failed at 2am, we still want to know). Given our experience with current sensor alarms, we didn’t want to alarm the blower directly. Being an air system with warm moist, salty air, a flow switch alarm didn’t make sense either. The alternative we arrived at was to use a pressure sensing switch.

We decided to experiment with the common domestic well pump control switch. Well pumps on domestic systems are commonly operated with a pressure switch that turns the pump on at 30 psi and off at 50 psi. These are of a very hardy design and made to last for many cycles per day for many years. They are made of brass and plastics. They are adjustable right down to zero pressure and near zero differential pressure. And one of their best features – they are in stock at every rural hardware store.

However, these pressure switches do have one application challenge. They are designed to close an electrical circuit at low pressure (referred to as normally open or NO). Our alarm system is designed to sound an alarm when a circuit is opened (referred to as normally closed or NC). To solve this on the blower system, we installed an electrical relay. Relays are electrical switches that open or close a circuit when they get an electrical signal from another source. This method worked, and has worked successfully now for over five years.

We have had a few false alarms while we worked at adjusting the pressures properly. But, none of these switches have failed. Here are a few ideas of where to use them.

• To detect that a pump is delivering water to a certain point. When a pump is running, pressure in the discharge pipe is higher than when it is off.

• To detect that a blower is delivering air to a certain point. When a blower is running, pressure in the discharge pipe is higher than when it is off.

• To detect that an oxygen supply is working. If the supply stops, the pressure in the system will drop.

If you have any questions about how to apply this at your facility, send me an email using the contact information below.

Philip Nickerson, P.Eng. is the Technical Manager and Engineer for Scotian Halibut Limited in Nova Scotia, Canada. He also owns and operates an aquaculture design and operations company – Aqua Production Systems Incorporated. To continue discussions from the article, contact him at: philipnickerson@gmail.com