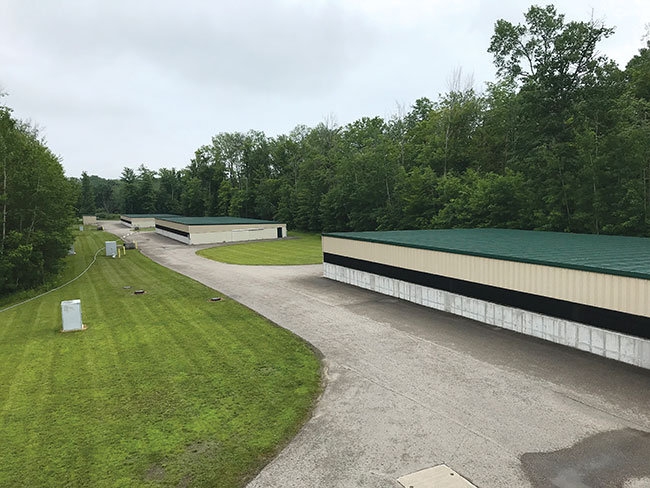 Solar panel arrays will be installed on top of these outdoor covered raceways at the Oden Fish Hatchery in Michigan, a pilot project for an initiative to utilize solar power at state-run hatcheries and parks.

With heightened awareness of climate change, and consumers demanding sustainability and as little environmental footprint as possible, marrying renewable energy projects with hatcheries and other aquaculture operations makes perfect sense.

While solar projects have been installed at hatcheries, several companies are selling, or are ramping up towards selling, solar power systems to incorporate into water-based industries to help offset energy usage.

In Michigan, USA, an initiative by Gov. Gretchen Whitmer saw the creation of a “sprint team” focused on launching pilot projects to incorporate renewable energy at state parks and fish hatcheries. The first pilot project at the Oden Fish Hatchery is currently in planning stages. According to Department of Natural Resources (DNR) fisheries manager Aaron Switzer, a request for proposal has been issued with the aim of awarding the contract in February of 2020 and to have construction completed by December 2020.

“The reason hatcheries were picked because the six fish hatcheries are a very high energy consumer for the DNR’s energy budget,” said Switzer. “Six hatcheries consume about 15 per cent of the total energy budget for the DNR. How can we subsidize our energy usage with a renewable?”

The plan is to install roughly an acre of solar panels on the roofs of large outdoor raceway buildings. There’s also a space adjacent to their broodstock facility which could be cleared to potentially install another three to four acres. The pilot project will not completely replace conventional energy usage – the Oden hatchery is the highest energy consumer of the six state hatcheries and it would take more than ten acres of solar array to produce enough power. Specific metrics for the success or failure of the pilot project are still being determined.

Building resiliency
In 2016, the Cayuse Mountain Fire burned more than 18,000 acres and destroyed 14 tribal homes belonging to the Spokane Tribe of Indians in Washington State. In response, the tribe formed the Children of the Sun Solar Initiative, investing in 650 kilowatts of solar capacity and, eventually, battery storage that will save more than $2.8 million over 35 years. The Tribal Fish Hatchery was one of the buildings to have solar panels installed.

“Through this new solar project, the Spokane Tribe of Indians is building energy security and resilience, while providing solar education and workforce training,” said Tanksi Clairmont, director of the Tribal Solar Accelerator Fund.

Several companies have made solar arrays for water-based operations a part of their business.

California-based Natural Current sell Savior brand floating water systems for a variety of purposes and clients, from hatcheries and open water aquaculture operations to backyard pools. The company sells solar pump and filter systems and water heaters at a variety of horse powers.

“This technology has been proven now for over 10 to 15 years,” said Natural Current CEO Michael Evingham. “Now there’s a lower risk factor for adoption. I’ve been doing it for 12 years now and we have zero returns out of over 10,000 customers. DC solar power direct pump systems are the way to go, with a hybrid setup with an AC pump for nighttime operation.”

Australia-based FloatPac is ramping up sale of its floating solar panel arrays, completing its first installation this past April. CEO Gavin Hodgins said the company began manufacturing inflatable lift bags and salvage bags for the Australian Navy. Within the last decade, the company has been examining ways to utilize its inflatable bag and StackPac bins in a solar power application.

FloatPac is currently testing what type of panels and batteries to use, and starting work on further trials in Cambodia and Vietnam. Hodgins noted, however, that solar won’t be a fit with every type of aquaculture operations.

“Obviously in, say, shrimp or prawn farming, the light coming into the water is very important for the growth of the animals, so we’d be blocking sunlight to be able to catch the power on the feeder panels,” said Hodgins.