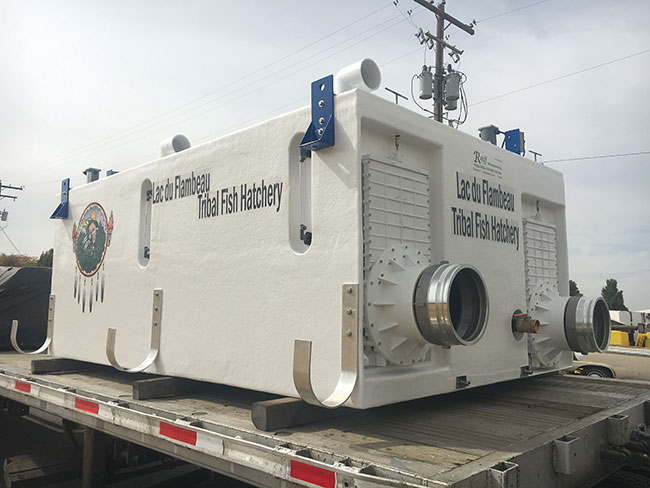 This transport tank was produced by Reiff Manufacturing for the Lac du Flambeau Tribal Fish Hatchery. Reiff has developed live transport solutions for a variety of federal, state and tribal government-run hatcheries.

The safe and effective transport of live seafood is a crucial part of the hatchery industry, from importing broodstock to transferring fish to other facilities and waterbodies as needed. What is involved in getting fish to their destinations in an optimal condition? Hatchery International spoke with several companies that provide live transport solutions to find out.

“The greatest challenge when transporting live fish is to transport the fish without stress and to design the habitat for the animals as optimally as possible during the transport period,” says Ulrich Bischopink, general manager for Germany’s LINN Aqua Technology which produces tanks and other equipment for live fish transport.

To allow the fish to exit the tanks without having to be net-handled, many LINN tanks come equipped with sluices – gates that allow a user to control whether the animals can swim out of the tank.

“All you have to do is attach a hose to the LINN sluice,” says Bischopink. “The sluice is a ball, which can be opened and closed with one hand. Due to the round shape of the sluice, no fish can be injured or crushed.”

“As we’ve expanded outside of coral trout, we’ve done a lot of work with blacklip (haliotis rubra) and greenlip abalone (haliotis laevigata),” says Hodgins. “Greenlip abalone is of a very personal interest to me, in that it doesn’t get shipped anywhere in the world live, because it’s too fragile. We’ve had great success in shipping up to 500 kilos per bin of abalone into North America and parts of Asia with zero mortality.”

Designing for the future
Hodgins notes that the logistics of packaging and containers can be a challenge. In order to make returning the bins more cost-effective, FloatPac developed the StackPac system. As the name implies, the empty bins can be stacked inside each other for easier and cheaper return shipping. FloatPac is currently developing recyclable packaging, where everything but the oxygen filter could be recycled locally.

“Transportation costs in all modes of transport, particularly in freight, have gone up exponentially in the last five or six years as the air industry grapples with how to make money,” says Hodgins.

FloatPac is currently working on incorporating telematics approaches, where data on the fish and the water are accessible in real time to the driver or to users online. Hodgins feels that such technology will play an important role in the future, an opinion shared by Jim Brennan, director of sales for Washington-based Reiff Manufacturing.

“[The future] is going to be in the electronic,” says Brennan. “Oxygen sensors and all that kind of stuff is really starting to take off where the guy in the cab can actually monitor what the water’s doing from the cab.”

Reiff provides fabrication solutions for a variety of different industries, including live transport tanks for fish. Head foreman Mark Kessler says that another key challenge is in maintaining water temperature.

“In our part of the country, we get up over a hundred degrees and if you’re travelling at distances, it’s rather difficult to keep that 40-degree water at 40 for that long,” says Kessler. “We’ve gone to an aluminum carrier with insulation all the way around. Fiberglass the outside and we paint everything white with UV protection on it to reflect most of the heat.”

Brennan adds that Reiff, to his knowledge, is the only company in North America taking that approach of combining fiberglass and aluminum and UV protection.

Reiff Manufacturing built this transport tank which provides a window to view the fish inside for the Mora National Fish Hatchery in New Mexico.

Germany-based LINN Aqua Technology provides a variety of live transport solutions, with options including automatic sluices and built in scales.

Fresh-Flo’s DR Transport Aerator is designed for use in raceways, small tanks and transport tanks where electric power is available. It operates with a 1/6 hp motor at 115 gallons per minute pump capacity and its small size makes it compatible with a variety of systems.

Up to spec
Reiff has created live transport solutions of a wide variety of sizes for mostly governmental customers, whether it be federal, state or tribal, Brennan says.

The same can also be said about another Washington-based company, Jetco Machine & Fabrication, which provide steel and aluminum manufacturing solutions.

The company’s experience serving a variety of industries – fabricating equipment for ammunition, saw mills, paper, hydroelectric and fishery customers – means they are flexible and well prepared to fulfill a client’s specific needs.

“The biggest challenge is to get the need that they have for loading and unloading and making the tank and its accessories as user friendly as possible,” says Jetco CEO Tony Maiorana. “Typically, the folks using them a lot of times are more biologists than they are truck drivers. We’re trying to build something that’s pretty user-friendly, pretty robust and has all the options they need to do their job.”

Maiorana is quick to point out that he and his staff are not fish health experts – the metal manufacturing company simply has the engineering know-how to produce products to the customer’s specifications.

“We can take concept to production and build stuff out of aluminum, stainless and regular steel and we also have machining capabilities,” says Maiorana. “We have a full blown CNC (computer numerical control) machine shop and a full fabrication shop with a water jet, a plasma cutter, shears and breaks and that sort of thing.”

But, over time there have been some lessons that Jetco have picked up from their clients. Unloading the fish in ways that involve less direct interaction is favoured – the end users don’t want to handle the fish unnecessarily, possibly causing additional stress to the fish.

“At the end of the day, the way the fish onload is something that we’ve really paid a lot of attention to and (we) listened to a lot of feedback. We have a pretty good system that unloads all the fish without anybody having to touch them,” says Maiorana.

Wisconsin-based Fresh-Flo primarily sell aerators, with several models designed specifically for transport. President Barb Ziegelbauer says that their aerators circulate water, adding oxygen and releasing undesired gasses that build up. She notes they also recently made changes to the transport aerators, so that it is no longer necessary to equip them differently when using salt as an additive.

Fresh-Flo is somewhat removed from the actual transport of fish, as the company makes equipment for it, but neither fabricates the transport tanks themselves nor do they have any involvement in transport. But speaking with her customers gives Ziegelbauer the impression that government regulations for live animal transport are one of the biggest challenges for the sector.

“[It’s a challenge] keeping up with them and lobbying for them to make sense,” says Ziegelbauer. “When I hear from customers who haul fish about the challenges they face, it seems that regulations are more of an issue than equipment performance, road conditions or other issues.”

Other sources spoken to for this article, however, did not reiterate that point. Maiorana indicated that Jetco had not found regulations to be much of an impediment. Bischopink noted that regulations are a fact of life, but not a challenge.

“As everywhere, the regulations are of course becoming more and more extensive,” says Bischopink. “Ultimately, the transport of live fish is, of course, about animal welfare.”