Hokkaido’s hatchery stock enhancement program began in the late 19th century and has continued for over 120 years. The first facility to be constructed was the Chitose Central Salmon Hatchery, built in 1888 on a tributary of the Ishikari River in northwestern Hokkaido. 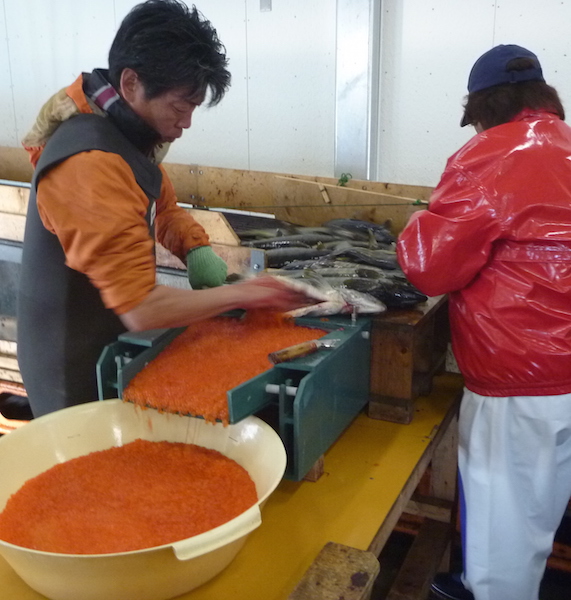 With an annual production of over 100

Today, there are 150 private and 10 national hatcheries operating in Hokkaido. Of the private

hatcheries, 100 incubate eggs and alevins. The rest receive chum as emerged fry or larger juveniles for subsequent rearing. The hatcheries produce 1.2 billion eggs, from which 1.0 billion fry are released each year. The Hokkaido Prefectural Government also plays a part by developing annual salmon enhancement plans, which prescribe the number of adults to be captured for broodstock, the number of fry to be reared in each hatchery and number of fry to be released.

“Before 1868, chum salmon numbers decreased considerably owing to poaching so the government cracked down and came up with measures to protect stocks in the wild,” explained Dr. Yasuyuki Miyakoshi of Hokkaido’s Salmon and Freshwater Fisheries Research Institute, Hokkaido Research Organization. “As a result, in the 1880s the number of chum salmon went up to 500-700 thousand and by 1889 had reached 11 million. The Chitose Central Hatchery was built in 1888 to maintain these numbers, and this marked the start of hatchery production.”

Another objective of the hatcheries is to increase commercial catches following the destruction of forests and wetlands and a loss of access to natural spawning habitats, which have extirpated many native wild salmon populations.

Broodstock are collected between September and December from weirs installed in around 75 rivers. Depending on the hatchery and area, eggs are incubated at temperatures between 6-9C° from September to January in box-type incubators that are capable of holding 500,000 eggs each.

Newly-hatched alevins are then incubated in shaded raceways, fed artificial dry pellets from February to June before being moved to raceways with water temperatures of around 4-12C° and fed for around a month.

In southern Hokkaido, where the climate is warmer, the incubation period starts earlier and

releases end in May. In cooler, eastern areas, the release period begins at the end of April and finishes at the start of June. Iodine agents are used to prevent any virus or bacterial diseases at the egg stage and the use of salt and/or vinegar at the fry stage is also important in preventing parasites.

Hatchery-reared juveniles are released in the downstream reaches of 145 rivers and at 74 net-pen sites. The hatcheries are encouraged to rear fry to 5cm in length and 1g in weight at the time of release by expanding rearing facilities and controlling the temperature of the water.

The average weight of juveniles that were released across Hokkaido in 2015 was 1.2g (releases from rivers) and 1.6-1.7g (releases from net pens). Such transplants are conducted within the same geographic region to minimize genetic disturbance and focus on efforts to conserve the genetic structure of Hokkaido chum salmon (genetic analyses have identified five genetically distinct groups in the area). Using a large variety and number of different adults for broodstock also helps to maintain genetic diversity.

In order to run the hatcheries efficiently, the Hokkaido Prefectural Government reduces releases that are deemed ineffective, such as those involving unfed fry or released at unfavorable times. Juveniles released from national hatcheries receive otolith thermal marks, but those from private hatcheries are only marked when scientific research has been conducted.

For Dr. Miyakoshi, it’s important that hatchery production continues to be the main management tool for chum salmon in Japan.

“Although some scientists deny the program, it’s crucial,” he said. “Human activities such as agriculture, flood control and urban development have had great impacts on land in Japan. For example, bank protection, the straightening of rivers and construction of dams has degraded riverine spawning habitats for chum salmon, and without effective hatchery production, we cannot maintain salmon stocks. It’s also important to recover and conserve naturally spawning populations and spawning habitats. Non-profit private salmon enhancement associations have crucial roles to play and must be further supported.”