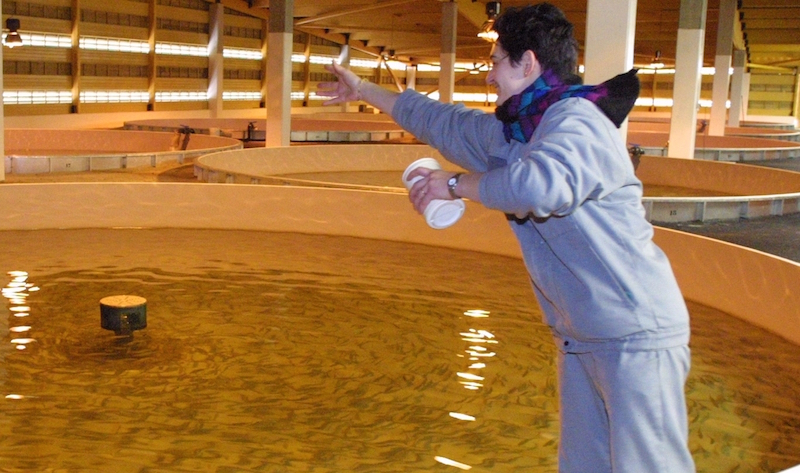 An annual restocking programme at the Chanteuges hatchery is gradually restoring the salmon status of France’s Loire-Allier river system.

When the decision was taken to create the Chanteuges unit, the number of wild salmon in the 1000 km long Loire-Allier river system had shrunk to just 100 fish. Today, the same long stretch of water contains 1177 salmon, a rate of restocking success which Dr Martin says owes much to pioneering work done by the Canadian Ministry of Natural Resources and Wildlife in Quebec.

“We have drawn on many techniques used for similar wild salmon-based work in Quebec,” he said, “embracing and adapting their discoveries as, and where, they suit our own local environment.”

Although today’s 1177-salmon total still only adds up to an average of just over one fish per kilometer, this is acknowledged as a solid breeding platform for the future and a notable achievement for the team behind the project.

It’s also quite a statement in terms of the resilience of the salmon involved, whose 1000 km long journey to their natural spawning pools often take 12-14 months to complete.

“We are allowed to taken 50 salmon a year from the river for our breeding work, 70% of which are female,” said Dr Martin. “Many of the fish we gather, however, won’t have eaten for fully 12-14 months and will have battled past cities, industrial developments, river dams and power stations to reach us.”

“As a result, they are generally extremely thin. A freshly captured one-meter salmon will often weigh no more than 8 kg, several kilograms lighter than the fish you would expect to find in many other wild salmon locations.”

The hatchery’s record for surviving females is six years, although that has only happened with two individuals.

Captured male salmon return a 60% breeding success in year one and about 30% in year two.

Once through their first breeding season, the surviving fish are fed again from February to May, during which time they eat a lot, just as in the wild, before getting ready to spawn again in November.

“We initially fed them fresh fish, such as capelin, before developing our own artificial feed about six years ago to avoid the risk of bringing problems into the hatchery by using fish for feed from outside the local area,” said Dr Martin.

The hatchery feed, which contains minerals and vitamins, is made into quite a soft pellet, much closer to a sausage texture than the normal pellet format used in commercial hatcheries.

Persuading the fish, particularly some females, to start feeding again after their extended starvation period is quite a challenge. The approach used includes dangling attractive feed from the end of a fishing line, hopefully creating sufficient movement to capture the attention of Chanteuges’ new breeding population.

“Some of the females are virtually anorexic at this stage,” said Dr Martin. “Getting them to start feeding again requires a lot of work and patience.”

With insufficient captured stock available to enable the hatchery to meet its desired annual output, the unit has developed a so-called ‘second strategy.’ This involves keeping some first generation fish as genitors, raised from hatchery smolts which are kept in freshwater for subsequent egg production.

Such fish grow slower than they would in the ocean, often taking 3-4 years to reach 1 kg. In every other respect, however, their development is kept as natural as possible, in tune with the wild salmon ethos of the Chanteuges unit.

“We never make selections at any stage of growth and we never grade,” said Dr Martin. “This is to avoid the risk of favouring more aggressive or fast growing fish or any other trait which may change the random nature of fish bred completely in the wild.”

“Similarly, while we use relatively standard 9-metre tanks for our smolts, the stocking density is extremely low and we only have a water depth of 50 cm. This again ensures that our stock are raised in conditions which are as close to the wild as possible.”

Chanteuges’ water supply is also drawn from the river, rather than from pumped or borehole sources.

“This is important to ensure that our fish, when they’re ready for release, already have the levels of natural immunity they will need to survive in the wild,” said Dr Martin, also adding that no hormones are used in relation to the spawning process.

“As a result, some of our fish spawn in early November and others not until late November. It’s important that we hold to these various fish management points as we really don’t know what will work best once we release stock back into the river system.”

Three release methods are used. The first consists of four egg incubator units, placed in the higher regions of the river, each containing 50,000 eyed eggs.

The second release consists of fry, of which about 1.1m are placed in the river each year, followed by the third release which involves 220,000 smolts.

Additional eggs are also supplied for restocking the Rhine in Germany and the Meuse in Belgium, with the size of the annual amounts depending on what is available once the Loire-Allier requirements have been met.

Ultimate success for Chanteuges, of course, would be for the hatchery to be closed down, having completed its task of revitalizing the wild salmon stocks of the Loire-Allier system. While progress to date has been good, however, the closure of the unit remains some way off with the next milestone being to reopen fishing rights for the species.

“Since the planning of the project began in 1994 the catching of salmon by sport fishermen has been banned in the rivers,” said Dr Martin. “Maybe once we get numbers above 1500 fish, that ban could be lifted. That would certainly help fishermen to embrace what we’re doing, more so than is the case at present.”

“There are other issues to be addressed, however, such as the water quality of the rivers themselves and the impact of the constant increase in the Loire-Allier catfish population (see sidebar) which is having a significant effect on our work.”

The latest analysis of the Loire-Allier salmon population puts the level of mature fish returning to the river, having originally started life at Chanteuges, at around 80%. While that’s an encouraging statistic for the hatchery team, it also means that the ‘self-sustaining’ population is still only at 20%.

“A major part of the reason for that is the continued poor water quality of the river system and the lack of fish ladders to encourage the salmon as they return to the spawning areas,” said Dr Martin.

“We also have to look at other ways of celebrating the return of wild salmon to this 1000 km system, maybe through festivals, as we see in other areas of rural French life.”

France’s wild salmon association already stages an annual Marathon du Salmon, a canoe-based event which runs from the Haut-Allier to the mouth of the Loire at Nantes. This highlights the challenge which the salmon face each year and is helping to raise public awareness of the restocking programme.

“We definitely need to foster more support for our work from the general population, building on the success of the canoe marathon, with other value developments,” said Dr Martin. “Perhaps then, maybe five or six years from now, we’ll be able to start thinking seriously about closing Chanteuges and once again letting the salmon of the Loire-Allier manage their own restocking process.”