A rare trout makes its home in the upper reaches of the Gila River of New Mexico and Arizona. The Gila trout (Oncorhynchus gilae) is native only to small headwater streams where it was landlocked thousands of years ago from sea-run Oncorhynchus species. 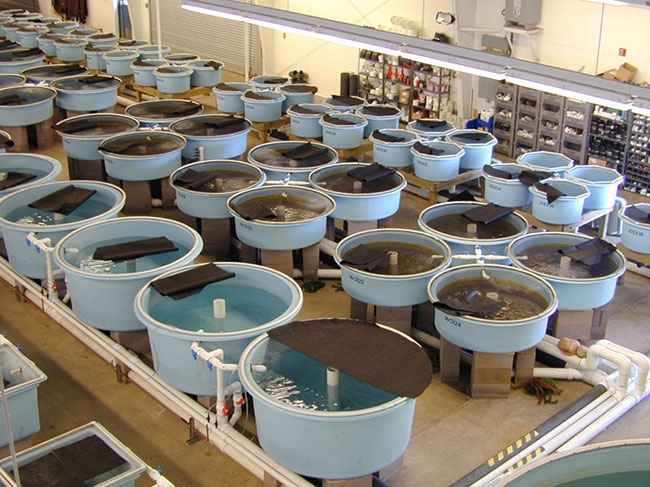 The self-cleaning nature of circular tanks makes them a favourite over traditional raceways. Arare trout makes its home in the upper reaches of the Gila River of New Mexico and Arizona.

The status of Gila trout improved from ‘endangered’ to ‘threatened’ in 2006, but they are still in a precarious situation. In the arid Southwest, recovery efforts through hatchery supplementation rely on recirculating aquaculture system (RAS) technology.

The hatchery has taken significant advantage of RAS. I ran hatcheries in Idaho for a decade with facilities utilizing up to 90,000 gallons per minute, first-pass water.  With that experience, RAS seemed a scary proposition. I am now running a facility with only 800 gallons per minute of available water, and I’ve realized how inefficient large-volume facilities are. With competent staff and a modern RAS, you can get a lot more out of a gallon than from banks of serial re-use raceways.

Mora takes advantage of RAS for water treatment: housing all rearing vessels indoors, increased swimming velocities for rearing, manipulating photoperiods for spawn timing, and easy changes to tank configuration. Compared to traditional hatcheries, Mora is built like a Lego set. Tanks and plumbing systems all sit on a concrete slab, so as the program needs change, only simple hand tools are required. Try changing the configuration of concrete raceways, and you’ll need a team of jackhammers, a cement plant and dollar figures with six zeros trailing.

Ideal for quarantine
The hatchery rears captive broodstock lines in a large RAS system. These broodstock are supplemented with wild-captured Gila trout held in small RAS quarantine systems. The nature of RAS allows us to put quarantine areas in small rooms that were originally lab and storage spaces. With existing walls, you’re only footbaths and a two-inch freshwater supply-line away from having a sequestered area to hold wild fish. Plus, you’re indoors so you can manipulate photoperiod with light timers to match your captive lineages.

These RAS quarantine areas allow the hatchery to provide refugia for Gila trout displaced by wildfires, and incorporate wild genes into the captive broodstock. When the habitat recovers in three to five years, these areas can then be re-stocked with the original fish or their progeny.

Egg incubation is completed on first-pass water. So, RAS isn’t used for everything. The staff at Mora had found that egg trays work almost like a biofilter in the RAS system. Debris that passes the drum filters and biofiltration can enter the incubation stacks. The eggs then act as a filter themselves, which increases issues with fungus. This, of course, is because the facility is maintaining fish and eggs simultaneously. Fortunately, the first-pass water from the incubators can be reused as the make-up water for the RAS system. We recycle egg incubation water, just not back onto our eggs. If we were only doing eggs at that time, a RAS would work great.

Lessons learned
Operating Mora’s RAS has been a challenge over the years. When you commission a hatchery, you want to eliminate as many variables as possible.   At Mora, we commissioned the system for an endangered species that was either untested or hadn’t succeeded in other propagation efforts. Our early endeavors with Gila trout were a struggle because we didn’t have the RAS dialed in. A big issue at Mora was chronically elevated total gas pressure. Between elevated ground water levels (115% saturation) and pump cavitation, the environment was continuously supersaturated with nitrogen at 105%. That wasn’t enough to cause mortality, but was a constant stressor on the broodstock that decreased eye-up significantly. Now, vacuum degassers supplement the original degassing equipment to maintain nitrogen saturation below 100%.

In addition, early research with Gila trout showed significant benefits from enriching the rearing environment. This involved placing gravel and other structures in the rearing vessels. While this did excellently in a research environment, scaling up to facility-wide implementation caused unforeseen consequences. We had mats of fecal material breaking loose periodically and then pulverizing on the drum filters. This caused intermittent plumes of ammonia that were nearly impossible to detect with our routine water-quality sampling protocols.

The hatchery has since switched to 2-D enrichment environments with the help of inlaid fiberglass veils. You can print anything these days. We looked at the problem and said why not make an aquarium background on the inside of a fiberglass tank? With some calls to the right tank manufacturers we had a solution. Now the fish have the benefits of enriched environments while maintaining the high water quality needed in a RAS.

I’ve worked at hatcheries for two decades and have done the sleepless nights for a long time. With RAS, I can pull up our entire system on my Android phone from anywhere with a cell signal, and check systems, turn pumps on and off, and have peace of mind. Would I go back? No way. The future of inland fish rearing is RAS. Once you make the commitment, you may even throw away your flip phone.

Nate Wiese is the manager of the U.S. Fish and Wildlife Service’s Mora National Fish Hatchery, located in northeast New Mexico. For more information contact him at: nathan_wiese@fws.gov.