Russian company Biosphere-Fish has launched the first stage of a major sterlet (Acipenser ruthenus) hatchery in the Republic of Tatarstan, 62 kilometers east from the city of Kazan, the regional government said in a statement. 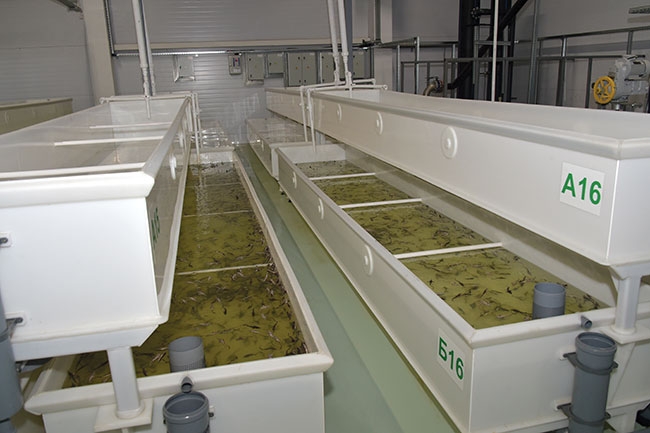 Biosphere-Fish's new hatchery in Tarstan will have the capacity to produce five million sterlet and one million trout fingerlings annually. Russian company Biosphere-Fish has launched the first stage

With the overall investment cost of Rub625 million (US$10 million), the hatchery is designed to produce five million sterlet fingerlings and one million trout (Salmo gairdneri) fingerlings per year at full capacity.

The new hatchery would meet 70 per cent of the region’s demand for sterlet broodstock needed for recreational campaigns, stressed Rustam Minninkhanov, president of Tatarstan, speaking during the opening ceremony. A number of evidence has indicated that sterlet population in local waters is gradually shrinking. This fish is already in the Red List of Threatened Species, Minninkhanov said.

Restoring reserves
There are hopes that with the new hatchery, the sterlet could be delisted from the endangered list at some point in the future, although there is a long road ahead before this can be achieved, Minninkhanov said. Environmentalists have estimated that Tatarstan needs to release at least eight million fingerlings just to begin pushing sterlet population up, the president outlined.

It is believed that starlet population in Tatarstan was generally affected by large-scale poaching. In Russia, the sterlet is known as “Tsar Fish,” since in the ancient times only the wealthiest people could afford sterlet on their tables. Situation has not changed significantly, as the price for fresh sterlet today starts from Rub1250 ($20) per kg at the local market of Kazan. This makes sterlet the main target of poachers, who are also hunting for even more expensive caviar.

Multiple customers
The new hatchery operates a recirculating aquaculture system (RAS), according to Vladimir Maligin, general director of Biosphere-Fish. The company will initially be selling sterlet fingerlings under government contracts, and to companies whose activity is included in the list of businesses negatively affecting the environment. Numerous companies, such as mines, chemical producers and others, are obligated to purchase broodstock to restore fish population at the territory of their operations, in accordance to Russian federal legislation.

“This means there are companies that have to buy sterlet fingerlings for their further release in the regional waters,” said Igor Abrakhmanov, chairman of Biosphere-Fish.

In future, however, Biosphere-Fish seeks to become the major supplier of the broodstock to the local fish farms. So far, all fingerlings in the region are purchased outside Russia.

“It is important that Tatarstan would have a broodstock of its own Volga wild starlet,” Abrakhmanov said. “As practice shows this fish should be genotyped at our own ground, because the sterlet fingerlings imported from other countries have rather low survival rate in the local waters,” he added.

Biosphere-Fish’s new hatchery in Tarstan will have the capacity to produce five million sterlet and one million trout fingerlings annually.

Chinese experience
In addition to the sterlet hatchery, other commercial fish farms are planned to be built in the region in the coming years, including one by a group of Norwegian investors. According to Vasily Sokolov, the deputy chairman of the Russian Federal Agency for Fisheries Rosrybolovstvo, the new starlet hatchery is only the first part of what would be the first fish farming cluster in Russia.

“As an example, we plan to use the Chinese fish farming industry, where major hatcheries produce broodstock and then transfer it further down the line to the commercial farms. When the fish achieves commercial size, the farmers sell it to the processing facilities that possibly may be exporting their products,” Sokolov explained.

The production complex in Tatarstan will become the first fish farm cluster of its kind in Russia, and the Biosphere-Fish hatchery is only the first step toward the realization of that project, Sokolov said.

Further expansion
The hatchery is slated to be finished by the forth quarter of 2019, according to Vladimir Maligin. However, Biosphere-Fish already revealed some expansion plans.

According to Abrakhmanov, the hatchery may expand its operations in the future looking at production of other fish species, like jack pike (Esox), pike perch (Stizostedion) and European carp (Cyprinus carpio). Abrakhmanov added that the plan is to focus on fish species that are in high demand on the market, or required by the government agencies.

The government is ready to provide all possible support to the new projects launched by Biosphere-Fish, commented Vladimir Izmailov, spokesperson for the federal Agricultural Ministry.

The imminent task could be to expand the production of trout fingerlings. The regional government estimated that the local investors may increase production in this segment fivefold in the coming few years. As a result, Tatarstan could become the first Russian region not importing, but exporting farmed fish.