About three hours north of Toronto in Ontario, Canada, a not-for-profit trout hatchery has mastered the art of sustainable stocking. 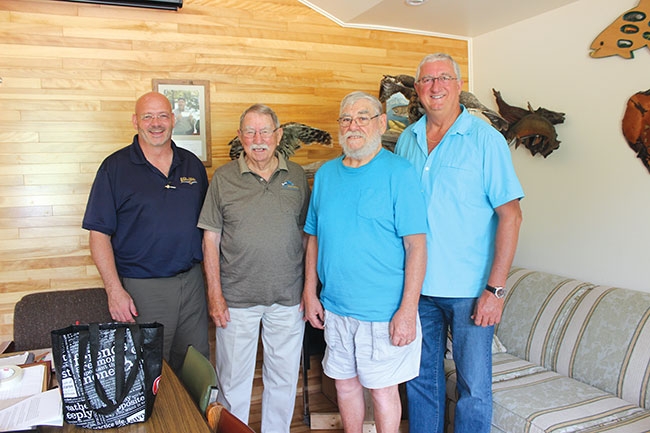 At a time when the aquaculture industry is just beginning to ramp up efforts to increase adoption of land-based fish farming technologies, the North Hastings Community Fish Hatchery (NHCFH) in Bancroft, Ont., has used nothing but a recirculating aquaculture system since it began operations in 2008.

Founded by a local community group led by the late Dennis LeFeuvre, the NHCFH’s goal was to increase the population of fish in local lakes, while making as little footprint on the ecosystem as possible, says Ron Bowman, fish culturing manager.

“Fishing around the area was going downhill, and people weren’t coming to the area (of Bancroft) to go fishing anymore,” Bowman recalls.

The group conceived the idea of a hatchery in 2001, but it wasn’t until 2007 that construction of the hatchery commenced. The founding members, with the help of a local fish biologist and guidance from the Bancroft District Ministry of Natural Resources and Fisheries (MNRF), initially conducted DNA studies of the species of fish they would rear at the planned hatchery, recalls Denis Brown, plant operations manager. The hatchery currently rears two species: lake trout (salvelinus namaycush) and brook trout (salvelinus fontinalis).

Considerable research was also done on the most appropriate system to build, which included the founders visiting several hatcheries to learn about recirculating aquaculture systems (RAS).

A total investment of $750,000 went into the construction of the hatchery, of which $75,000 was spent on RAS. For its RAS provider, the group chose Baton Rouge, Louisiana-based Water Management Technologies in the U.S., as it was the only company at the time that was able to provide a complete solution, Brown says.

Better with RAS
Today, the NHCFH rears lake trout and brook trout in a recirculating aquaculture system that sits in a 27-acre property surrounded by farmed crops. The system uses up to 32,000 litres of water, of which 94 per cent is recirculated.

The RAS facility uses both round tanks and raceway systems. Fertilized eggs are placed inside round tanks, which has two levels. The upper level tray holds the eggs until they hatch, at which point the fry would slip down to the lower level of the tank, where they stay for up to eight weeks. The fingerlings are then moved to the raceway system. The fish stay in the hatchery for about 17 months before they are released in the lakes.

“We grow bigger fish than the MNR,” Brown declares. NHCFH-reared fish grow to about 180 grams, while fish from MNRF’s flow-through systems grow to only about 30 to 40 grams, in the same time frame, Brown explains.

The key, he says, is the water temperature, which is better regulated in a RAS than in flow-through systems.

Such is the challenge with traditional flow-through systems, where it’s more difficult to control water temperatures, which tend to affect feeding habits of the fish. In RAS, Brown says, their fish are constantly feeding and therefore are able to grow much bigger when released.

The NHCFH’s ability to grow bigger fish even caught the attention of the MNRF in Ottawa, that four years ago it commissioned the hatchery to grow 30 to 40-gram lake trout for the government for full restocking, Brown recalls. The program, which had already ended, saw the NHCFH growing 10,000 fish per year for the Ottawa MNRF for five years.

The entire facility is attached to an alarm system that monitors a variety of inputs – water temperature, dissolved oxygen, carbon dioxide and water flow, among other things – and is triggered when it detects a failure in any of the components.

“The system will start phoning people when a problem happens,” Brown says. “In one instance there was a hydro outage that lasted for 14 hours and our generator did not kick in.” Although the alarm system triggered a notification, the hatchery still lost some fish that day.

The hatchery maintains a success rate of 80 to 85 per cent from the time the eggs hatch, Brown says. He can only recall one instance when they had to deal with disease at the hatchery – which resulted from contaminated eggs being brought to the hatchery and infecting the whole system. The problem was resolved with the help of Dr. Veronique LePage, fish pathologist from Guelph University, and one of the volunteer staff at the hatchery who also happens to be a retired veterinarian.

Community involvement
The NHCFH has always operated and succeeded on the backs of community volunteers – contributing a combined 8,500 volunteer hours annually to the hatchery. There are 25 to 30 volunteers that perform various functions through the hatchery, including harvesting eggs and sperm from the lake during spawning season.

Funding for operations come from generous donors and an annual fundraising that typically raises $30,000 a year for the hatchery, says fish culturing manager Ron Bowman.

This year marks a major milestone for the NHCFH, according to John Vanderpas, a board member. By end of July 2018, the hatchery had completely paid off its mortgage – a major accomplishment made possible by support from donors, particularly Mary LeFeuvre, the widow of Dennis LeFeuvre, Vanderpas points out.

The hatchery is also involved in education initiatives partnering with the North Hastings High School, which the students there have fondly nicknamed the NERDS (Northern Environment Research Development Studies) program.

“Every second year, (the students) come hear once a week to help out at the hatchery,” Bowman says, which counts toward the students’ community service hours requirement for graduation.

One of the tasks they  help out with is in fin clipping. The fish are fin-clipped a minimum of six weeks prior to stocking. This process assigns an annual identifier to stocked fish so they can be distinguished from naturally reproduced fish in the same lake.

The NHCFH website explains the process: “The fin that receives the clip is determined by the MNRF’s provincial five-year rotation schedule. Fish are placed in a container and temporarily ‘knocked out’ using a special drug administered by a MNRF technician. The designated fin is then clipped using small surgical scissors, and the fish are placed in a recovery container until active before being returned to the raceways.”

Future plans
The leadership of the NHCFH views the involvement of young people in the hatchery operations as vital to the future of the hatchery. The young volunteers learn from veterans like Brown and Bowman about fish rearing and other aspects of fish farming and restocking.

“We have to start building our succession plan for the future,” said Kevin Vance, NHCFH president and founding member.

The hatchery also plans to expand the species it currently grows and would like to be able to rear another Ontario native, the Walleye (Sander vitreus), Vance says.

He adds discussions are currently ongoing with the MNRF to allow the Bancroft hatchery to add a third species to its family. The hatchery managers – led by Bowman and Brown – have been doing their research about this particular.

The group is optimistic this will happen. After all, the hatchery has been built to a capacity of up to 20,000 fish per year.