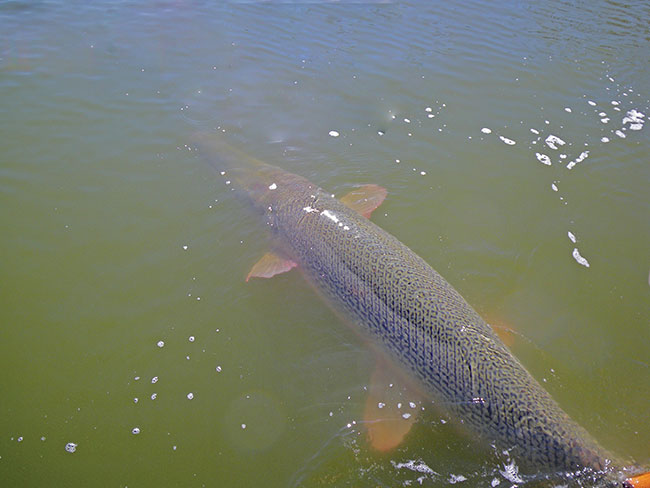 The alligator gar species dates back to approximately 215 million years ago. Photo: Heart of the Hills Fisheries Science Center/Texas Parks and Wildlife

There is no way an alligator gar could win a beauty contest; but they could earn a gold trophy for survival. Ancestral fossils have been found dating back approximately 215 million years ago. Scientists in Texas are delving into the mysteries surrounding these massive fish and ways to ensure their survival.

One question looms large: How did they survive and the dinosaurs didn’t? Daniel Daughtery with Texas Parks and Wildlife’s Heart of the Hills Fisheries Science Center in Mountain Home, might have an answer.

Survival of the fittest?
“No one can say for sure, but living in water likely was advantageous at the time,” Daughtery started, who had a personal reason for studying alligator gar. “I have a keen interest in charismatic megafauna and have previously worked with sturgeons, which have a similar life history. Professionally, we were charged with understanding the species’ status and providing recommendations for management in Texas.”

Scientists began to discover a noticeable  population decline in the last 20 to 30 years. It was likely occurring long before this, but little attention was given to the species then.

“We started work on alligator gar in Texas around 2008,” he said. “This research began in response to growing popularity in hook-and-line and bow fishing for the species, as well as growing interest in the conservation of native fishes and greater understanding of the importance on apex predators in aquatic ecosystems.”

There are many scientists involved in the work in Texas, and across their native range

The perspectives on these ancient holdovers from the age of the dinosaurs have changed, he said. Gars have long been viewed by anglers and managers as harmful to game fishes and recreational angling. Most investigations of these ancient, piscivorous predators have centered on their dietary habits, not their broader ecological role in aquatic communities.

Most management has involved eradicating these fishes rather than using them constructively. It is suggested that managers should view gars not merely as nuisances to be destroyed, but as contributors to ecosystem stability and function, to balance predators and prey, and for more successful angling in the long term.

A crucial, but declining population
Alligator gar (Atractosteus spatula) has experienced declines in abundance and reductions in its distribution. Once abundant throughout the middle and lower Mississippi River drainage and Gulf Coast rivers from Florida to northern Mexico, they’re now considered rare or extirpated from the northern half of its range.

Historically, both anglers and fisheries managers considered the alligator gar a detriment to game fish populations, resulting in long-term eradication efforts in many systems. Modified flow regimes resulting from the damming of rivers exacerbated the effects of chronic mismanagement by reducing the availability and frequency of floodplain spawning habitats. The resulting population declines, coupled with a general lack of scientific data on the alligator gar, led to the recent designation of the remaining populations as “vulnerable” by the American Fisheries Society. Studies to better understand alligator gar biology and ecology have been conducted in many river–reservoir systems in recent years.

Collectively, these studies suggest that alligator gars of various life history stages occupy a wide range of estuarine and marine habitats. However, no studies have quantitatively investigated the proclivity of the species to use these environments or the factors that influence their use. Coastal habitats have been largely overlooked in the management of alligator gar populations in Gulf Coast rivers, and the species has generally been ignored in the management of coastal communities. Understanding the abundance and spatiotemporal distribution of alligator gars in saltwater environments would provide insights into the importance of coastal habitats to Gulf Coast riverine stocks and of the species in estuarine and marine ecosystems.

“We used weighted-effort, multifilament experimental gill nets (61 m in length and 3 m in depth) to collect alligator gar throughout the lower Trinity River in 2015 and 2016 in low-velocity habitat,” Daughtery continued.

In the lower Trinity River and Trinity-Galveston Bay system, Daughtery’s team objectives were first, to utilize otolith (each of three small oval calcareous bodies in the inner ear of vertebrates, involved in sensing gravity and movement) to infer movements between the river and bay among fish collected throughout the system. Second, was to identify factors that influence movement. Results of this study, along with those of previous works, will provide further guidance on the appropriate scale of management for alligator gar in the lower Trinity and other Gulf Coast river systems.

Some may wonder: do gar have predators? “As adults, their predator is man, and as youngsters, other alligator gar; they can be highly cannibalistic,” Daughtery said.

Research the fishery
“Mostly our work focused on understanding the life history and ecology of these ancient fish,” said scientist, David Buckmeier. “They reproduce infrequently (tied very close with large flood pulses in large river systems). Although they live more than 50 years, populations are often dominated by only three- to four-year classes.”

While they are capable of long-distance movements, they often exhibit very high site fidelity returning to the same pool within a river. Scientists also conducted a lot of work validating age estimates as these are critical to understanding the species’ life history. Alligator gar can grow very quickly, attaining lengths of 500 mm to 750 mm in the first year.

In the tanks, scientists use them for a variety of things from research experiments to simply holding forage and research fish for processing/data collection.

“While many populations have declined, they are not endangered,” he said. “In Texas, strong populations remain. Commercial fishing is not a threat if regulations are followed. Unfortunately, this is not the case in other parts of their range. Mostly, habitat loss and loss of access to floodplain habitats have caused declines.”

Fishing for alligator gar
Alligator gar have been around for 215 million years, have survived countless world changes, and still hold a fascination for anglers.

“They are tough fish, built for survival,” said Shawna Stowers, customer success manager for Captain Experiences, in Austin, Texas. “Their slow maturing and reproductive rate might be a reason for the longevity.”

In more recent history, alligator gar populations greatly declined, mostly due to popular opinion that they were ‘trash fish’ or a ‘nuisance’. This lead many state authorities to focus on eliminating them to protect game fish because many people believed they were dangerous simply due to their name and appearance.

Knowledge of alligator gar as a species has grown greatly in recent years and restoration and conservation groups in many states, with the assistance of state wildlife departments, have helped to reverse the impact on the species.

“There are a lot of reasons people are interested in fishing for alligator gar,” she said. “They really are dinosaurs in their own right, with a rich history, and are actually one of the oldest and largest freshwater species in Texas, making them quite a ‘bucket list’ fish.”

There are also many different ways to fish for them, including top water, live bait, bow fishing, and even fly fishing. They also are good table fare, and used to be fished commercially in the southeastern areas of the states, although releasing them is recommended today.

It is important for both the fisherman and the fish to keep it on its stomach when out of the water, and avoid its tail and mouth to refrain from hurting the fisherman or the fish.