A probiotic that increases survival rate in Eastern oyster (Crassostrea virginica) larvae by as much as 35 percent could be commercially available by 2020. 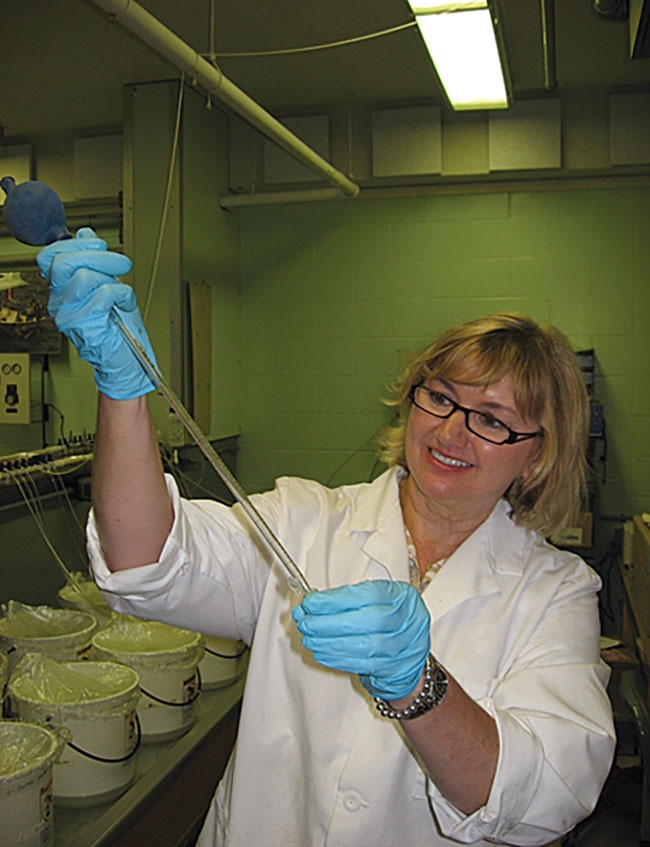 The National Oceanic and Atmospheric Administration (NOAA)’s Milford Laboratory, in Connecticut, U.S.A, has isolated and evaluated a naturally-occurring beneficial bacterial isolate, probiotic strain OY15 which is a benign strain of Vibrio alginolyticus, from the digestive glands of adult Eastern oysters. Now, it’s hoping that a viable, stable formulation will be developed and pave the way for commercialization of OY15.

“This MTA allows Prospective Research to culture probiotic strain OY15 in large-scale bioreactors and produce a stable, freeze-dried powder formulation of OY15 for the Milford Laboratory to test on oyster larvae to confirm that freeze-dried OY15 still improves survival as well as live bacterial OY15 cells do, prior to commercializing this strain,” Diane Kapareiko, a microbiologist at the NOAA’s Milford Laboratory, told Hatchery International.

“If all goes well, we are anticipating commercialization of OY15 by Prospective Research in one to two years.”

The NOAA’s Milford Lab research was initiated to improve hatchery production of Eastern oyster seed for aquaculture and restoration. Kapareiko stressed that the livelihood of the commercial oyster industry depends on healthy, hatchery-produced larvae.

“As aquaculture production is increasing steadily to supply seafood for an ever-expanding global population, natural methods to prevent disease in commercial aquaculture facilities can help prevent bacteriosis and improve larval survival,” she said.

This probiotic strain has demonstrated significant protective effects against a shellfish larval pathogen B183 (Vibrio corallyliticus) in experimental larval trials.

Improving survival rates
In a best-case scenario, Kapareiko said, survival rate of larvae reaching metamorphosis (setting) ranges from 20 to 30 percent. In the early life stages (preset larvae), bacteriosis is likely a large contributor to mortality rate, she explained, because bacteria are the most difficult variable to control in a commercial hatchery.

Optimal temperatures for growing preset larvae range from 24 to 27° C, which is also a prime temperature range for growth of bacteria. “Bacteria are in the seawater and oysters are filter feeders. They filter in everything from the water, even pathogens. If pathogens are in high enough concentration, bacteriosis occurs in the larvae and mortalities increase,” she explained.

Other factors that could lead to mortality issues in early life-stage larvae are mostly human-induced.

Many variables other than bacteria could be a cause of mortality in oyster aquaculture. “Husbandry is also critical in maintaining optimal survival rates in oyster larvae or any cultured animal,” said Justin Leonhardt, a technician at Milford Laboratory Hatchery.

“Mortality issues can also arise from mishandling larvae; too little aeration, too high stocking density, too little food, too much water flow, too little water flow, improper growing temperatures, or mismanagement of water filtration at the facility,” he said.

Even catastrophic events such as large storms and heavy rainfall causing low-salinity seawater or a harmful algal bloom releasing biotoxins into the seawater and coming into the facility can affect survival, he added.

“The advantage of using naturally-occurring bacterial probiotic strains is that they are an environmentally-friendly, natural, economic method to prevent disease and improve survival in commercial aquaculture facilities, which subsequently helps to sustain the increasing need for seafood production, thereby improving nutrition and seafood security, and providing sustainable economic benefits to the aquaculture industry of the United States,” Kapareiko said.