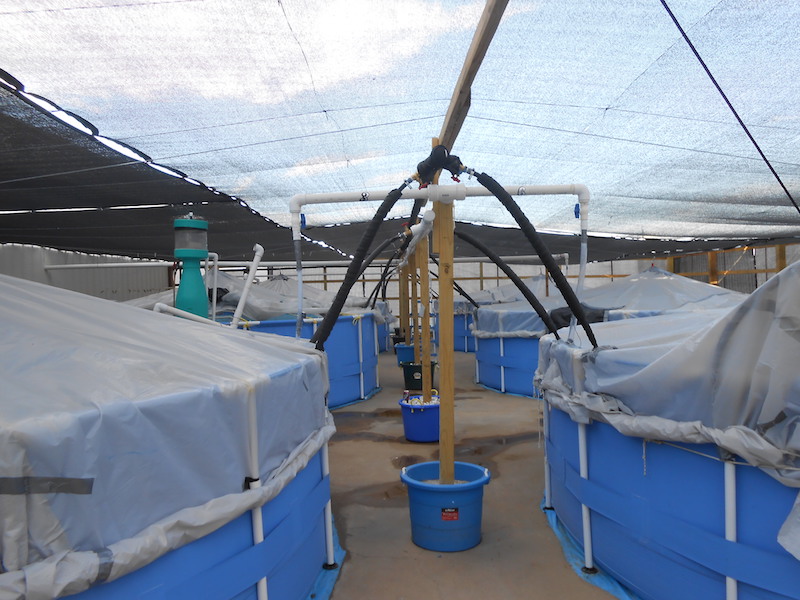 One hundred miles inland from the Gulf of Mexico just west of Houston Texas, you might expect to see cotton growing, not a high-tech indoor recirculating facility for breeding genetically selected shrimp. But it makes perfect sense to Primo Broodstock’s technical manager Neil Gervais and it is, he says, the way of the future.

“I’ve just come back from Northern China in the Shandong area and there are over 200 inland facilities producing large volumes of shrimp for the live Chinese market,” Gervais told Hatchery International by phone from his home in Texas. “The indoor hyperintensive farms are doing considerably better than outdoor ponds in the south of China.”

Being inland and away from natural drainage is important, Gervais explains. “With Texas regulations it is much easier to work with non-indigenous species such a vannamei if you are not in a drainage system that could release your animals into the eco system.”

The other reason is bio security for export. “Most countries have very stiff strict rules regarding pathogens. You’ve got to be able to show that you have been clear for several years in your facility and your stocks,” says Gervais. “That is obviously facilitated if you are in an inland facility with no natural seawater and no exposure to the natural environment.”

“Our animals are based on pathogen-exposed shrimp,” says Gervais. Stocks have been quarantined in South America and at the University of Arizona and two years in Texas. “Prior to market we had to show that we were able to eliminate the actual pathogens at the gene pool,” he explains.

Primo is developing animals that will grow in a non-bio secure environment, where they may be exposed to disease and still show superior growth.

“Over the last five years prior to them coming into the United States they were in genetic selection programs,” explains Gervais. Shrimp families were selected for tolerance to a range of diseases – Taura, IHHN, NHP, White Spot and general vibriosis. Once the animals had shown that tolerance, they were selected for growth to find the best families that carried that tolerance and showed superior growth.

“When we started the selection program there was very little tolerance to most of these diseases,” says Gervais. “Right now we can say these animals are resistant to the diseases mentioned.”

“Faster growth, lower feed conversions and better tolerance and growth at lower temperatures are characteristics that can really add to profitability and stability in non bio secure environments,” Gervais explained. And that is their initial broodstock customer.

The company was able to begin exporting last year. “We did field testing in ponds in Mexico and were able to commercially prove that our animals showed a superior tolerance to the diseases they had down there,” says Gervais. “With a track record, we are now opening up the permits to be able to export to most of the shrimp producing world.”

Primo shrimp are going to China, Malaysia, Thailand, Saudi Arabia and India. In the future, Primo sees a huge benefit to setting up country-based multiplication centers to house breeding stock and produce PLs.

It’s been a small start for the privately owned company. “Because it is a genetic program we are not so much concerned about the number of PLs produced as we are about the number of families to maintain diversity for our selection programs,” says Gervais. “We can spawn about 20 families a month and are hoping to expand up to 50 families.” Currently, production is about 5,000 broodstock a month, with 20,000 in the next two months and 50,000 a month, in the next two years.

Post larval sales are a second priority. “Today we can produce say 2 or 3 million Pl’s a month, says Gervais. “That number we hope to expand up to meet whatever the market requirements happen to be.”

Gervais says his 35 years in the shrimp business gave him a leg up when designing their facility. “I started with the first Harlingen (shrimp farms Texas, now owned by KAPPA Aqua Ventures) project back in the early ’80s,” he says. “So its has been a long school.”

The design, construction and running of hatchery and maturation units has been his focus. But when it came to heterotrophic zero exchange grow-out systems, it was a learning curve. Gervais credits former Texas A&M researchers Dr. Tzachi Samocha and Dr. Addison Lawrence as mentors. Eight years working for Zeigler feeds gave Gervais exposure to a lot of other systems.

Gervais calls Primo’s initial facility “relatively small.” The hatchery is housed with the maturation, spawn and hatch systems. The initial growout system is in a warehouse. There is an external system with twenty, 20cu m. tanks and also two, 150 cu m. round tanks under greenhouse. “All are recirculation systems,” says Gervais. “All heterotrophic, mixotrophic systems, which are floc based.”

Primo is 100% Ziegler artificial feeds. “I would not consider using natural feeds in the hatchery,” says Gervais. “We actually get superior performance using Zeigler’s synthetic artemia.” Together with Zeigler’s other larval diets, they are able to maintain clean tanks and the nutrition necessary for the animals to stage quickly, and at high densities.

“For the hatchery and from juveniles to broodstock we use numbers of over 80% in most circumstances,” says Gervais. “There are situations where survival can come up lower, but it is usually at the human element.

The devil is in the details. “No type of installation is free of pathogens,” Gervais explains. “There are ambient bacteria that come in with the animals from any source. They can go from opportunistic to obligate pathogens in certain circumstances.”

Even in bio secure systems you have to maintain internal biosecurity to avoid cross contamination. Gervais emphasizes trying to remove stress in every facet, including water quality, oxygen and solids, to keep the environment healthier.

“But there is also a genetic element,” he stresses. “We have seen very distinct differences between certain families. Some are very sensitive to these bacterial pathogens and their toxins and other families are incredibly tolerant to them. So, obviously, for the inland growout systems we have a specific selection program that we are developing now.”

Well water and artificial salt mixes produce a marine salt environment. The hatchery, maturation, spawning and hatching are all done at 32 ppt salinity and growout for broodstock is kept at 20 ppt. Initial treatment is by reverse osmosis. Water has to be monitored for alkalinity and ph. Mineral content and the ion balance are checked and magnesium and calcium are added as needed.

With outside temperatures from freezing to over 40°C, heating and cooling systems keep water between 28 and 32°C. “We never allow it to go over 28°C in growout and maturation,” says Gervais. “Over 30°C, it has the affect of dropping the fertility in the males.”

Cyclone vortex filters remove about 80% of the solids from the water and they are concentrated and dried for organic landfill. But they have a secret ‘house-fish” in the tanks.

Cages of tilapia are in each individual growout tank, about 1 fish per cu m. Tilapia feed on the floc and the shrimp feed on tilapia’s sheath feces. “We are seeing significant improvement in water quality, less solids and the shrimp are healthier and growing faster,” says Gervais. Tilapia are filtering the water for us and producing a high value feed,” he quips.

Gervais looks for positive growth in the industry, both at home and worldwide. “I see more and more problems in world shrimp production. I see the prices staying high – high enough to where there is a time frame for new projects. I see the US consumer wanting very much a US shrimp, produced under better aquaculture practices. Wholesalers, retailers and consumers are all looking for that healthier shrimp. Hopefully, it will be provided by success stories in these new inland hyper intensive or super intensive systems.”

“From our side, we are working on and hopefully will have an animal, that’s better selected for that specific type of system.” Gervais concludes.