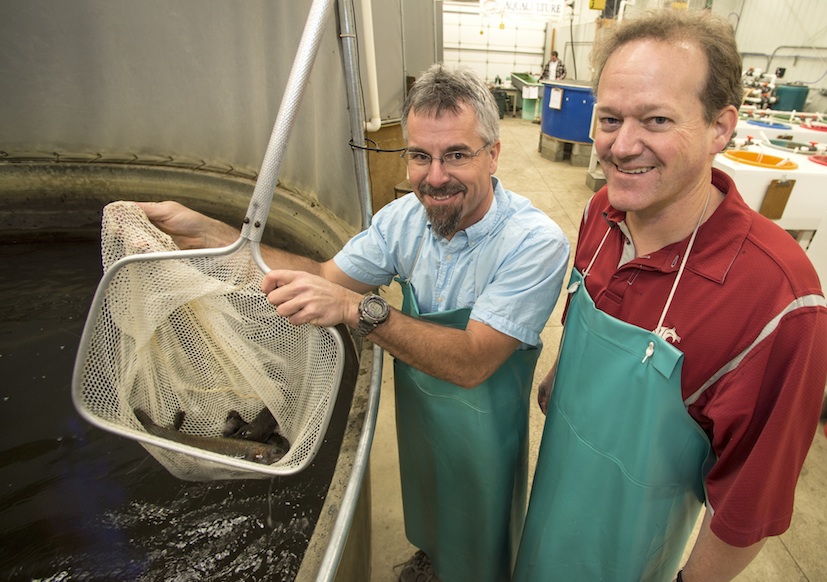 Scientists have found a simple and effective method to combat this disease using the trout’s intestinal bacteria as probiotics.

The rainbow trout is a work of art and a diner’s delight. But when the freshwater fish falls prey to coldwater disease, its colorful body erodes into ragged wounds and ulcers. The bacterial infection can kill up to 30% of hatchery stock and costs millions of dollars in economic loss.

After 15 years of research, scientists at the University of Idaho and Washington State University have found a simple and effective method to combat the disease using some of the trout’s own intestinal bacteria as health-giving probiotics.

They showed that the probiotics work by secreting a toxic protein that does not harm the fish but does kill the coldwater disease organism, Flavobacterium psychrophilum.

Douglas Call, professor in the WSU Paul G. Allen School for Global Animal Health, reported the findings in the publication Applied and Environmental Microbiology earlier this year. The study was funded in part by the Western Regional Aquaculture Center and the Idaho State Board of Education.

“Coldwater disease is the number one bacterial illness affecting US trout aquaculture and to a lesser extent coho salmon,” said Call. “Once an outbreak starts, the only way we’ve had to treat it has been with antibiotics.”

“The problem with antibiotics is that they can lead to bacterial resistance and also contaminate the water and soil,” he said.

He said probiotics could be a cheap and effective alternative to antibiotics – and welcome news to the global salmonid aquaculture industry.

How does it work?

Probiotics, broadly speaking, are live bacteria and yeast that are beneficial to health. Lactobacilli bacteria, for example, are commonly used in yogurt and livestock feed to help promote disease resistance and overall health.

Cain said probiotics are commercialized for use in European fisheries, but have only recently been considered for U.S. aquaculture.

To find the C6-6 probiotic, Cain and his colleagues painstakingly searched through 318 strains of bacteria from the GI tracts of trout until they identified those that could kill the coldwater disease microorganism. He chose to examine the trout’s native gut bacteria because such strains were able to survive in the fish’s digestive system.

Subsequent field trials showed significantly reduced mortality rates from the disease in fish that were fed strain C6-6. But as is common with many probiotics, the scientists really didn’t know how it worked.

“We found C6-6 produces a toxic protein called an entericidin, which inhibits the coldwater bacteria,” he said. “It could also present new opportunities for treatments against closely related pathogens.”

“The bacteria that produce the entericidin are fast growing, cheap to produce and easy to put on food for the fish – all the attributes of an ideal preventative treatment,” said Call.

Although coldwater disease occurs in the wild, Cain said it is most prevalent in commercial trout and salmon hatcheries where crowding and stress lead to frequent outbreaks – a point of concern for Pacific Northwest growers.

Idaho trout farms produce about 75% of US and nearly 50% of worldwide trout harvest. Neighboring Washington state leads the nation in production of trout eggs, a commodity sold to hatcheries around the globe.

“It costs the Idaho trout farm industry and Washington aquaculture facilities over $10 million each year to combat coldwater disease,” said Cain. “Controlling it will take more than one tool.”

He recently patented a vaccine for the disease that is in the licensing process. He and Call agree that vaccinating fish to prevent coldwater disease, followed by the feeding of probiotics to limit its spread, would be beneficial.

Thanks to the discovery of the C6-6 entericidin, Call said he is hopeful for regulatory approval and commercial licensing of the probiotic as well.

“If C6-6 is as effective as our research is showing, it will reduce disease losses for fish producers, improve animal welfare and reduce the demand for antibiotics in aquaculture.”