“Trout fishing in particular in west North Carolina is big business,” says Adam Moticak. “These communities in western North Carolina rely on these fish to be stocked in the various bodies of water.” 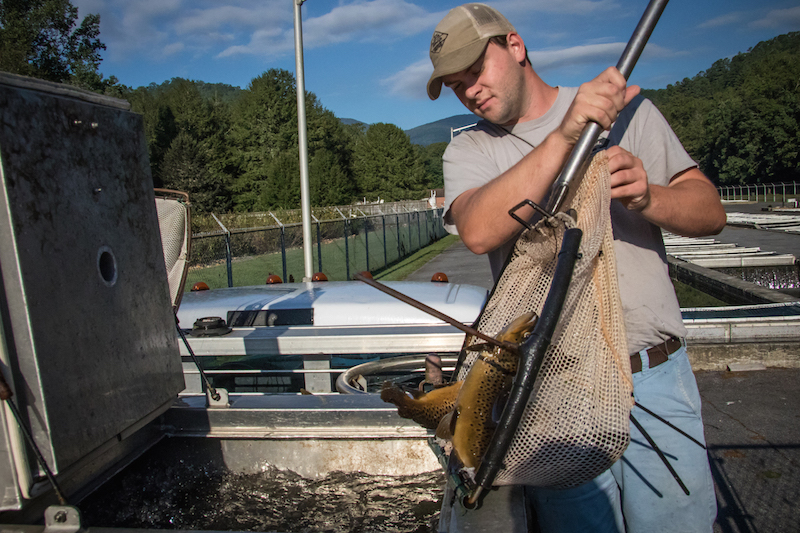 Moticak is the fish hatchery superintendent at the Bobby N. Setzer Fish Hatchery, located in the Pisgah National Forest. The hatchery has been supporting the local trout fishery since the early 1950s when it was constructed by the United States Fish and Wildlife Service. In 1983 the hatchery was turned over to the state and the North Carolina Wildlife Resources Commission. Today, it is estimated that the economic impact of trout fishing on local economies is in the range of $174 million.

Moticak says that the hatchery’s system brings in surface water from two intakes. That water then passes over low head oxygenators through four different series of 200-foot raceways.

“We’re able to do that because of our soft water here,” says Moticak. “We have no minerals, no alkalinity, which in turn means there’s no ionized ammonia buildup that would potentially kill fish in other situations. A lot of fish hatcheries in this part of the country use that method.”

The hatchery’s operation is a mix of indoor and outdoor components. Egg incubation and early fry rearing takes place indoors and when the fish reach three to four inches, they are moved outside to grow to 10 inches, which is the catchable size of fish they produce. They also stock some fish larger than 14 inches.

Moticak says that the hatchery continues to face certain challenges. The hatchery struggles with enormous pH swings during rain events and certain times of the year. They have also seen sedimentation issues rise as public usage of the national forest increases.

“The wildlife commission is planning on rebuilding this facility, hopefully in the next two to three years,” says Moticak. “We are starting the process of going through scoping work to determine what it’s going to take to rebuild this place and to incorporate technologies into it that would help mitigate some of these issues that we see.”