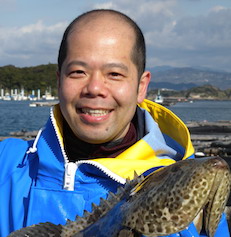 animal parasites in Canada when he became interested in fish parasites.  One of his recent research targets is Kudoa.

“I started researching Kudoa after people who had eaten infected flounder in Japan got food poisoning,” he said. “We rear flounder at Kindai, and fortunately have never detected the Kudoa species which causes food poisoning, but we did discover a closely-related parasite and thought we could work to prevent future infections.”

Kudoa are microscopic parasites of 10 microns that often infect marine species of fish.  Most research occurs in Australia, Japan and North America but there is still very little information on the parasite and some varieties have yet to be discovered. The highest number of Kudoa species is found in the skeletal muscle, followed by the central nervous system.  The heart, and organs such as gills and the brain, can also be targeted.

“Fish whose brains are infected by Kudoa display abnormal behavior.  Their bodies also become bent and cysts can form in the brain in four weeks,” Shirakashi explained.  “The fisheries and aquaculture industry can also be affected through economic losses when a fish’s marketability is reduced.  For example, when the Kudoa parasite affects muscle, macroscopic cysts form on the fish and it can’t be sold.  The flesh of infected salmon can sometimes melt after death too.  This is where our work comes in.”

Shirakashi first obtained basic information about the infection kinetics of Kudoa by studying Kudoa yasunagai (a brain-infecting kudoid myxozoan) in yellowtail amberjack (Seriola lalandi) at a commercial hatchery in Wakayama, Japan where infections were known to occur annually.  Ten juveniles were sampled every week for a month to monitor infection. The experiment detected Kudoa yasunagai from the brain at three weeks with a detection rate of 40%, which went up to 100% within the subsequent two weeks.  There was also a rapid increase in Kudoa DNA in the spinal cord after three weeks.

To develop an effective way of controlling infections, Shirakashi turned to treating water. He began by rearing yellowtail amberjack for seven weeks in 500L tanks containing water irradiated with different UV doses (0, 5, 15 and 30mJ/cm2 ), and examining them weekly for infection over a 4-week period.  The infection rate of yellowtail amberjack reared in untreated water was 45%, and less than10% in fish reared in UV-treated water at 5mJ/ cm2.  This dose also reduced the infection rate and intensity of infection.  No infection was detected in the water treated at 15 and 30mJ/ cm2, indicating that a UV irradiation dose of between 5 and 15mJ/ cm2 would be sufficient to prevent infection.

“As there’s no medicine to kill Kudoa, stopping infections is vital,” Shirakashi explained. “The infective stage of Kudoa is still unknown, but we found that UV was effective because the parasite appeared to be small and weak against ultraviolet rays, weaker than we expected. We hope that one day, we’ll be able to kill Kudoa in the same way that we can kill ordinary bacteria.”

Shirakashi is hopeful but says there are still issues to address.

“We know it’s possible to prevent infections,” he said. “The question now is preventing them once the fish have left the hatchery.  We must learn more about the Kudoa life cycle and where it comes from, investigate its ecology while it’s in the water and establish a genetic approach to further identify and quantify it.  We’re looking forward to further developments.”