Huon Aquaculture is at the forefront of innovation in Tasmania’s salmon farming sector. Their new hatchery/smolt production facility at Forest Home, Judbury, on the Huon River, is part of that innovation. 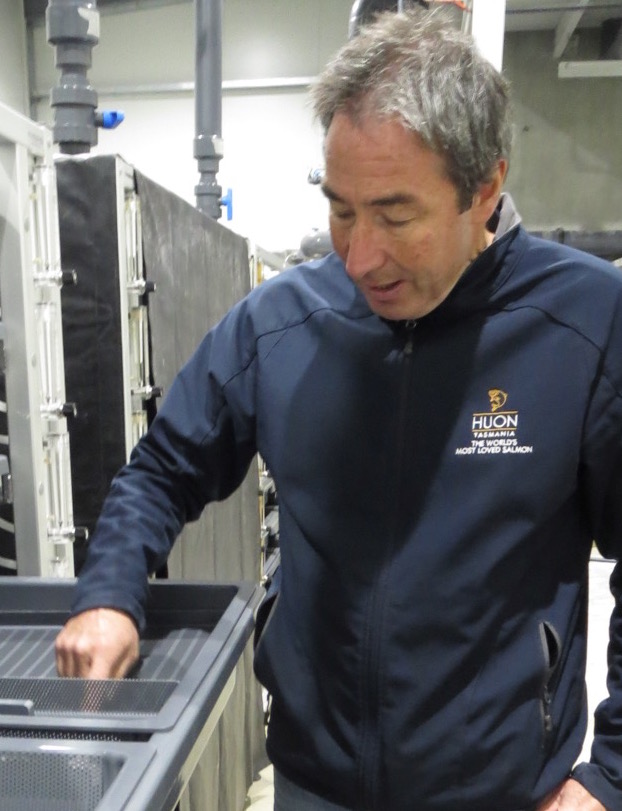 David Mitchell is Huon’s General Manager of Freshwater Operations. He said the planning and

construction rollout was a well-timed ‘just in time’ operation:

“In response to increased market demand for high quality salmon there was an increased requirement for a reliable supply of high quality smolt,” he said. “In a country that regularly suffers from drought conditions, the answer these days is a RAS facility. Based on our experience from our Lonnavale RAS plant that has been operating since 2006, the benefits of having control over environmental factors give optimum feed performance, and extraordinary quality and growth.”

Huon took several things into consideration when choosing a manufacturer. Fish welfare and performance were top of the list and to ensure this the size of the treatment area is important.

“You get better outcomes from a large de-gassing and bio-filter area,” Mitchell noted.  “Our environmental footprint was also a major factor in making our decision. Minimal water usage and waste treatment were high priority items for us as well. Aquatec Solutions and Billund both offered proven commercial systems that would fit our specifications on this scale.”

“We completed our first cycle while the building was still under construction.  The planning permit went to the Council in July 2014.  By June 2015 we were stocking our first eggs from Springfield and Saltas. The first fry were ready in August 2015; the first parr by February 2016; and the first smolt were put to sea in June 2016.”

To give some idea of the commitment Huon has made, the capital outlay was over $30m.

Water is drawn from both the river and a bore (well). The farm — tanks and treatment plant together — hold approximately 5,400m3 of water. The bore water has a high alkalinity that helps buffer the pH in the system. The water is mechanically filtered down to 25µm before being ozonised to kill any microbes that might be present and to oxidize and precipitate any unwanted minerals such as iron and manganese. The water is mixed according to the farm’s buffering needs. When the river is in flood, turbidity can make the bore water the preferred option.

Water exchange through the tanks is every 45 minutes and water replacement — due to evaporation and splash, but primarily sludge removal — is a very low 5-7% daily.

Water flow through each system is driven by one set of main pumps and through individual oxygen cone pumps for each tank. The whole facility is on one level, which reduces the number of pumps required and energy costs. Overall there are five separate modular, quarantined, recirculating production units: two for incubation; one for 12 fry tanks; one for 12 parr tanks; and one for 12 smolt tanks. Fry tanks measure 5 x1.6m @ 30m3; parr: 7.4 x 2.3m @ 96m3; and smolt 11 x 2.3m @ 220m3.

Water treatment starts with the removal of suspended organic matter in a 50µm drum filter. The water is then de-gassed before going through the up-welling bio-filter, the media beads of which are only 15% of the void. The flow is slowed at this stage to allow any remaining particulate matter to precipitate. Four minutes of ozonation follow before the water passes through another de-gassing chamber to remove residual O3 and CO2. The water also passes through a side stream vacuum de-gasser to remove supersaturated O2 and other foreign gases before being picked up by the main pumping system. The treated water is then supersaturated through the O2 cones to 100-110% and returned to the fish tanks

The 5-7% side stream flow that goes through to the sludge treatment plant passes through a plate separator to remove the large particles that are transferred to the sludge tank before passing into a denitrification filter that converts nitrate into nitrogen gas. The phosphorus remaining in the flow complexes into particles after the addition of ferric chloride, which is then settled out and added to sludge tank from where it’s collected for re-cycling as manure. The separated liquid, after passing through a large ozone contact chamber, goes to two storage reservoirs from which it’s used to irrigate Huon’s surrounding agricultural land.

The solid waste stream passes through an anaerobic digester, where bacteria reduce the volume. The resultant by-product is dewatered through a belt filter and is now in a form that can be used as a highly nutritious plant food.

Forest Home facility is fully computer controlled, and is backed up by two generators of 900kVA  and 1,200kVA, respectively.

Points with the public

The other benefit from this extremely efficient technology is that it adds good will to the company’s brand. Aquaculture, as the new primary food industry, comes in for some intense scrutiny from the environmental movement. The Aquatec facility built for Huon Aquaculture at Forest Home produces 400 tonnes of fish per year, has a 5-7% daily water intake and negligible nutrient discharge. It would be fair to say that few other food producing sectors could make that boast. As David said, “We are not an industry that can afford to pollute the water in which we make our living.”

Spawning is in May/June with  incubation using Comphatch Incubators designed and built by Alvestad Marine AS in Norway. The spiky substrate is for the alevins to sit amongst. The eggs sit on a removable tray that sits above the substrate. When the alevins hatch the egg tray is removed leaving the alevins among the substrate.

Initially eggs are held at 7-8°C until they reach 150 degree days. Thereafter the incubation temperature is changed for different batches dependent on when they are scheduled for commercial  harvest. Stock due for transfer to sea cages in April (Batch 1) continue incubation at 7-8°C and will be harvested from April to July the following year. Stock due for transfer in June (Batch 2) are incubated at 4-6°C to slow their development and will be harvested from August to November, The last batch is incubated at 2-3°C which slows their development significantly. This batch will be transferred to sea in September and harvested from December to February.

Once the alevins hatch, the temperature is brought up to a standard 8-10ºC for a few days. They’re held in the Comphatch trays until their yolk sacks are exhausted, usually 30 days. At this stage they’re moved to the fry rearing room and fed a starter diet The fish are batched in sequence through the tanks in the  fry- parr- and finally the smolt-hall before transfer to sea.

Smolt are transported in custom-converted milk tankers to the company’s well boat, the Ronja Huon, moored at the wharf at Port Huon, approximately 45 minutes from the hatchery. Dependent on fish size, this can mean up to 14 truck transfers per day. After the last truckload has been discharged into the boat, the fish will be in the Ronja for 1-3 hours before reaching their destination sea cage. Such short transfer times ensure good water quality is easily maintained for the whole journey.

As the aquaculture industry becomes more automated, staffing numbers can be reduced. The farm runs a standing staff of two shifts working 7 days on and 7-off.  Each shift consists of a senior manager, a leading hand and three technicians and a maintenance engineer. There is someone at the plant on a 24-hour basis for alarm cover. However, as David said “…labour input becomes relevant in comparison with an open system,” but automation will reduce that differential.

Huon Aquaculture employs over 500 people, drawn both from local talent and from overseas. David Mitchell is one of the managers in the Tasmanian industry who learnt their craft on Northern Hemisphere salmonid farms.  His wide experience in Tasmania and Scotland gives him an overview that benefits the whole business, from R&D to operations management.

As part of its risk mitigation strategy, Huon produces fry at four of its hatcheries, Forest Home, Lonnavale, Springfield and Bridport, and also on-grows fish at two freshwater sites at Meadowbank and Millybrook. These different locations give Huon a safety net of different operational and temperature options. With the threat of global warming sharpening the focus of many vulnerable food-producing industries, Huon Aquaculture has a very clear view of what has to be done to future-proof its assets and income flow, and at the same time, assure its clients of a reliable supply of high quality produce grown in an environmentally sustainable way.