A 240,000-fish RAS hatchery is nearing completion at the University of Stirling with the promise of producing research-robust stock for use in future research projects across the United Kingdom. 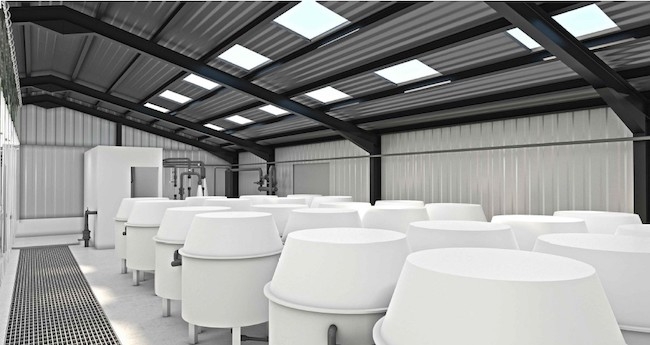 Rendering of the soon-to-open University of Stirling RAS hatchery

The new unit is due to be fully operational by December this year, following a 12-month planning and build process to provide researchers with robust Atlantic salmon and rainbow trout, all completely free from any kind of disease or treatment history.

“Building our own hatchery means we will be able to produce a totally clean, reliable source of research-robust fish,” said Alastair McPhee, aquaculture facility manager at the University of Stirling.

“By ensuring that the fish used in trials are not challenged by external parasites, or suffering from low-level disease problems, validates the accuracy and reliability of our research.

“It also improves the longer-term value of our research results and potentially prevents trials having to be repeated to test key conclusions.”

The new hatchery – developed in conjunction with AquaBioTech – will feature a 24-tray egg incubation area with carrying capacity for 240,000 eggs and an on-growing RAS unit containing 24 tanks of 1,000-litre capacity.

The on-growing facility will be equipped with full temperature controls and photoperiod manipulation, carried out using variable intensity LED lighting. Each tank will also have waste feed and faeces separation and will be supplied with fully computer-controlled feeding systems and an environmental monitoring system, all linked back to an office-based PC.

“While our top level design numbers will allow us to stock up to 240,000 fish every six months, we don’t expect to operate anywhere near that total,” said McPhee. “Because of our research focus, the unit is likely to carry around 80,000 fish every six months. This will be mainly Atlantic salmon and rainbow trout, although we will be able to work with other temperate species if required.”

In addition to producing research-robust fish for use in research within the Stirling site, which includes the globally-renowned Institute of Aquaculture, the hatchery will also provide stock for researchers working at the University’s marine field station at Machrihanish in Argyll.

“Being able to supply the research team at Machrihanish with suitable fish for the saltwater phase of their work on sea lice and other projects will be a major boost,” McPhee said.

“We are also receiving potential supply requests from other UK universities and commercial researchers, all of which will be considered once we’re up and running.”

Current project priorities in Stirling for the new unit, meanwhile, include research on fish oil replacement options and the possible testing of the comparative merits of RAS and flow-through hatcheries.

“Our design is commercially relevant, with the inclusion of special features being driven entirely by our research requirements,” said McPhee. “Our system, for example, will allow us to recover any feed which isn’t consumed and collect any waste that’s created, which are both essential factors when carrying out dietary trials.

“In this context, we’re already at an advanced stage in talks with major feed manufacturers about potential research projects.”

Longer term developments for the new hatchery also look promising following the UK Government’s recent granting of £22-million (US$28.2 million) of ‘City Regional Deal’ funding to the University of Stirling as part of a £90.2 million (US$115.7 million) award to Stirling and Clackmannanshire in general.

“We definitely have ideas on how to use some of that money to benefit Scottish aquaculture in the future, over and above what’s already been invested in the new hatchery,” McPhee said.