Features Recirc
One size does not fit all

Recirculating Aquaculture Systems (RAS) present us with an alternative to seawater net-pen aquaculture.  The recent struggles with net pen licenses, and legislation in general, have made it difficult in many countries to expand current sea farms or create new ones. 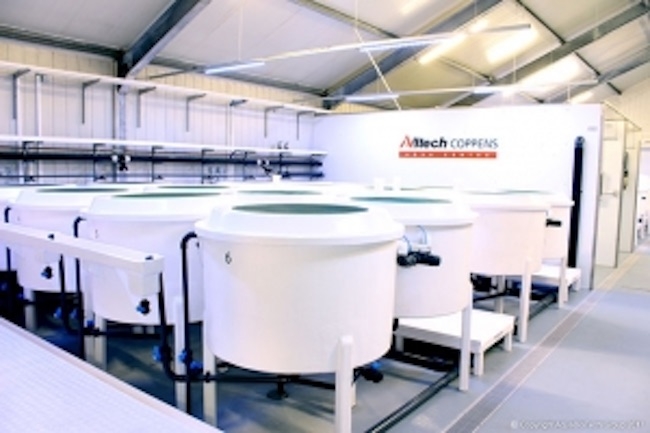 Although net-pen culture has an essential role to play in the expansion of aquaculture, an alternative method of farming saltwater species needs to be developed in parallel and in a complementary nature (e.g. supplying net-pens with fish to on-grow). This alternative (RAS) utilizes advancements in filtration, husbandry and monitoring technology to control the undesirable factors of fish farming, reduce risks to the stock, and help produce a stable product that is grown efficiently in optimal conditions year-round.

Failure to launch
There have been many reports of new RAS failing after only a few years of production. This was documented in a 2010 report by CEFAS as being up to 40% between the years 2000 and 2010 in England and Wales.

The main reasons for these failures have been fundamental design constraints, operational costs and management failings. This is not surprising to any RAS farmer, as many I have spoken with come back to the same issue – the facility could not produce its expected tonnage. This means that the financials – the very concept the farm was based upon –were flawed, owing to overestimation of production and underestimation of costs.

Another issue is that RAS facilities may not be suited to their production functions. This is a trait that has damaged the reputation of RAS, because it is less costly and easier for companies to sell a system they have already designed, as opposed to a system specified to fit the needs of the farmer for his or her unique situation, site and species.

What do farmers want from RAS?
Farmers want a realistic (and achievable) production target from a system that has the right number of tanks, which fits in with their production planning and is able to cope, not only with the densities and feed amounts that are required, but also the mistakes, technological mishaps and human errors that come with operating a RAS facility.

Therefore, safety margins for the biological and technical systems being installed must be high and the operation of the facility must be based upon a realistic and detailed production plan from the first conceptual design.

Another major factor concerning operational costs and production efficiencies is equipment failure and the inevitable consequent reduction of growth.  This is hugely abundant in seawater RAS, partly due to the lack of experience of RAS designers and farmers, but also because of the high costs associated with the quality of equipment and material that is required in order to build a reliable RAS in such a corrosive environment.

PERSONAL EXPERIENCE
My colleagues and I, from various backgrounds (academic, RAS farming, engineering, maintenance, architectural and veterinary) and nationalities, have combined our experiences in the design and operation of seawater RAS, to build facilities based on what we believe are the farmer’s needs. This means a facility with a reasonable production plan (and safety margin), allowances and redundancies for things going wrong and the use of high quality equipment.

The materials we typically use in these situations are duplex and titanium for our drum filters and backwash pumps, for example, with a minimum of 316L/duplex grade of metal where required and high-strength biaxial weave fiberglass and non-metallic components for all other items.  All pumps are high performance and non-metallic, with variable frequency drives and a system design which is extremely energy efficient in order to minimize operating costs.

The components in our designs are first tested at our R&D facility and the operations of the farms are determined from the perspective of a RAS farmer. This means incorporating such items as custom-made fiberglass fish crowders to reduce personnel required for handling operations, as well as purging and draining ports for ease of cleaning and maintenance.

An example of one of our facilities, due to be completed within a few months, is phase II of the Sheikh Khalifa Zayed Marine Research Center in the UAE.  This incorporates several tank types (round, d-ended, shallow, deep…etc.) and a variety of systems in order to provide optimal conditions to the broad spectrum of species that will be bred, hatched and grown there. Each specific system has been sized and calculated using engineering, 3D architectural and bio-planning software to customize it to the operator’s needs in this particular situation.  The facilities consist of 69 fish tanks, 28 live feed tanks, 12 egg incubation and general experimentation tanks and other operational components such as custom made grading troughs, in-tank egg incubators, tank partition dividers and crowders.

To summarize, in order to achieve a successful and sustainable seawater RAS farm, designers need to start looking at the facility from a farmer’s perspective and stop promising unachievable production tonnages from systems that do not take into account the true operating and maintenance costs of a RAS facility. In addition, we need to ensure through training and after-sales support that staff operating the facility are well versed with the technology and that the systems run as intended.

Only then can we achieve the true potential and bright future of RAS for sea fish, freshwater fish and other aquatic organisms, all of which will be needed to feed the predicted increase in world population in a healthy and sustainable manner.

Rob J. Davies is a principal aquaculture consultant with AquaBioTech Group in Malta. For more information go to: www.aquabt.com or email him at: rjd@aquabt.com