Having your home or business located in close proximity to an active volcano presents a unique set of challenges, but for one hatchery, it also spurred a necessary change that would improve the business going forward. 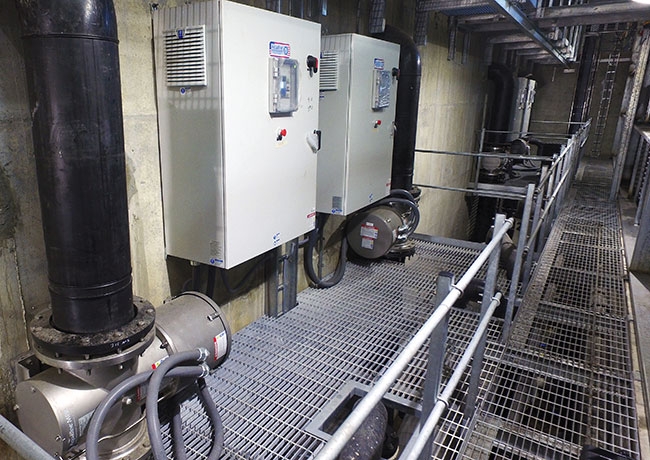 Camanchaca Salmon Hatchery is the largest recirculation fish farm in Chile, producing millions of smolts per year. It is located in the town of Petrohué in southern Chile’s Los Lagos Region, where Calbuco, the country’s third most dangerous volcano also lies.

Despite achieving much success and rewards since operations began in 1965, the hatchery was struggling to keep its ultraviolet (UV) system operating consistently and reliably. Spare parts were expensive and the hatchery often experienced periods of down-time, negatively affecting operations. The UV system is used to disinfect the water at the hatchery, and the need for a new system was top of mind.

When Calbuco erupted in late May 2015, it released volcanic ash and sand that destroyed Camanchaca’s UV equipment. This spurred the start of the hatchery’s UV upgrade project in June 2015 to replace the UV system.

The hatchery’s operations management insisted on an effective and eco-friendly disinfection process and specified that the water treatment upgrade would include replacing the UV units.

After considering proposals from several UV manufacturers, management decided on Valencia, Calif.-based Aquafine. Camanchaca says the manufacturer was selected for its high safety standards, state of the art technology, and ease of installation and operation.

“It was an easy and very programmed process,” Aquafine’s Sebastián Vásquez said in an email.

Aquafine’s proposal included eight MPR2L12 models and four MPR4L12 models. One of the key benefits of the MPR UV system is the self-cleaning mechanism, which reduces maintenance and helps ensure the proper UV dose is delivered at all times. Without an automatic wiping system, the production line would need to be shut down periodically in order to remove and clean the quartz sleeves. The MPR series automates cleaning, reducing maintenance and maximizing uptime of the equipment.

Maintenance and uptime were key considerations in the selection of a new system for Camanchaca. The company says Aquafine’s maintenance costs and replacement parts were the best fit. The compact configuration of the Aquafine MPR series, including the UV lamps, enabled a flexible installation that helped to reduce construction costs.

Local technical service and support was also critical for Camanchaca and helped in choosing Aquafine to install the new UV system.

“This project opened the door to sell more equipment not only in this hatchery, but also in a fish processing plant and in another hatchery, where we installed an open channel system of our UV3+ line,” Vásquez said.

Operations resumed at the Camanchaca hatchery in early 2016 with 12 new UV units in place. The company says it has since returned to full production, meeting its sustainability and water quality goals.

Vásquez said the positive experience has led to two more pieces of equipment being installed at the site soon.

Camanchaca began operating in 1965, catching and processing shrimp and langostino lobsters. In 1980, the facility diversified into other sea products, including aquaculture. In 2002, the hatchery began using a recirculating aquaculture system (RAS) for its fish farming operations. The water treatment process used at the hatchery includes mechanical and biological filters, oxygen injection and UV light for disinfection of any microorganisms in the water.

Camanchaca became the world’s first salmon producer to earn four stars for the Global Aquaculture Alliance’s (GAA) Best Aquaculture Practices (BAP) certification. This standard guarantees that salmon production is performed in a socially and environmentally responsible manner and is safe for human consumption.