As environmental groups in China are looking to find ways to restore salmon resources in the country, a helping hand has come from across the Pacific Ocean. 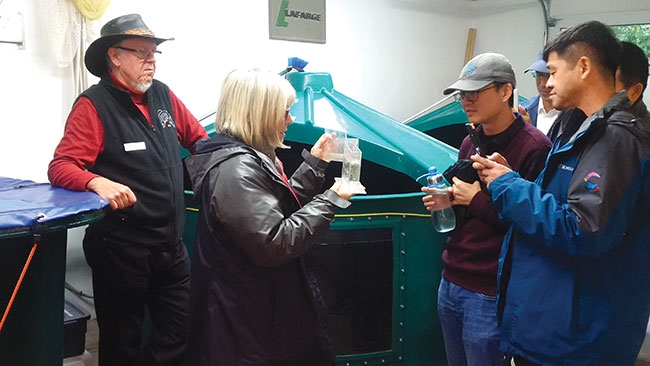 Neil Laffra and Ruth Foster of the Mossom Creek Hatchery share info and insights with their guests. As environmental groups in China are looking to find ways

Organized by former DFO Fisheries salmon biologist, Matt Foy, a delegation from Chinese environmental groups, such as the Forever Nature Capital Foundation, visited several hatcheries in British Columbia, Canada, in September for fact-finding and cultural exchange. Foy became familiar with the challenges related to salmon in China through his volunteer work with the Pacific Salmon Foundation and was asked to see if he could help.

“I exposed them to a number of community hatcheries here in the lower mainland,” Foy said. “We looked at how communities are engaged in salmon enhancement. So that’s probably something new. Typically, in China, it’s run by a level of government.”

The delegation visited the Bell-Irving Hatchery in Maple Ridge, the Hoy Creek Fish Hatchery and River Springs Hatchery in Coquitlam, Mossom Creek Hatchery in Port Moody, and the Seymour River Hatchery in Northern Vancouver. While the visits were largely focused on education and community outreach, there was also some focus on specific technologies.

“The Coquitlam projects are in urban environments with sometimes limited water supplies, or perhaps only one supply of water,” Foy said. “And there is quite a nice, compact recycling water systems for the urban environment there, where they can control water quality and temperature. So we did want to focus the visit on that.”

Another key focus was on aeration systems, as Foy felt that some of the hatchery’s simple aeration systems could help address water quality issues related to oxygen and nitrogen.

Foy said that, as he understands it, Chinese fish culture appears to be coordinated at the local level, so they are hopeful they will be able to affect change.

Neil Laffra and Ruth Foster of the Mossom Creek Hatchery share info and insights with their guests.