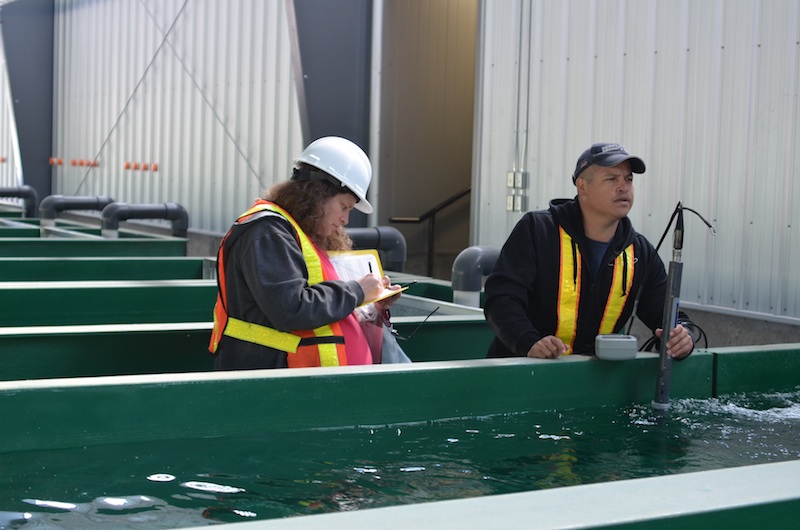 Spend time with Shayla Lawrence and Richard Bussanich and it’s obvious they are keen about their new workplace.

The two fisheries biologists for the Okanagan Nation Alliance (ONA) are sharing duties as “Hatchery Operations Biologist.” When Hatchery International visited the site late this summer they were overseeing last minute details for a September opening of a new $8 million sockeye salmon hatchery, just outside Penticton, in southern British Columbia, Canada.

Shayla Lawrence is a member of the Okanagan Indian Band, one of the Eight Nation members of the ONA. With a degree in Animal Biology, from the University of British Columbia, she worked on the ONA’s initial hatchery program in Lumby, BC Richard Bussanich, with a Masters in Marine Sciences from the University of Guelph, has worked from “Sacramento to the Aleutians.” Most recently, he was involved with projects for the Nisga’a First Nation, in the Nass River Valley.

“We had been using the DFO (Fisheries and Oceans Canada) hatchery in Lumby,” explains Shayla Lawrence. “But we were outgrowing the site and needed a facility that was more dedicated to the specific needs of sockeye.” Bussanich adds that their technicians have been working on every aspect of the program in the DFO facility for the past eight years. “The only thing that is changing is the location, the water source and the building.”

The new building will be following the strict ‘Alaska Sockeye Protocols’, to cater to these IHNV-susceptible salmonids. “We are aiming for a ‘no-touch system,’” explains Lawrence.

“This is the only operation that I know of that is gravity-fed start to finish,” adds Bussanich. “It goes from when the eggs are dropped into the Kitoi boxes, until they swim out into Shingle Creek.” Only hatchery staff will be allowed in the building during growing season and strict disinfection procedures will be followed.

Water is drawn from three wells in the Shingle Creek watershed which surrounds the hatchery. They provide good water oxygen levels, with temperatures around 10°C. The wells have a capacity to provide 2500 gpm for the flow-through system

“We have been flow-testing all summer through the 35°C heat and we saw no draw-down of community wells,” says Bussanich. Water is initially pumped to degassing towers and then stored in header tanks, before flowing by gravity into the hatchery.

For their initial start-up year the egg target is around one million, with plans for five million eggs in the fall of 2015. Eggs will be collected from two sites along the Okanagan River.

“We are gathering from the spawning grounds just north of the town of Oliver,” explains Bussanich. This 4 km stretch has some of the last remaining 10% of natural habitat in the Okanagan River system.

“The rest of the eggs will be collected just below the new hatchery where Shingle Creek meets the Okanagan River,” he adds. It is expected that these fish will spend their nursery year in Skaha Lake, the second up-stream lake in the Okanagan chain. Okanagan Lake, headwaters of the Okanagan River and the largest lake in the chain, is a future out-plant location.

Eggs and milt will be collected at riverside and brought to the hatchery to be fertilized, disinfected and hardened. There are two hatch rooms each containing 16 Kitoi boxes, which could later expand to 25 boxes, for a full capacity of eight million eggs.

Maximum load will be 70 females per Kitoi box, with eggs from each collection site in separate rooms.

“We’ve had over 95% fertilization success for our last eight years at the Lumby hatchery,” Bussanich points out.

When the fish are ready to be moved into the raceways, a 4-inch hose connects the Kitoi boxes through to the 18 raceways and the fish flow over on their own. Egg to fry success has been 80 to 85%.

“We have an average return of 7% and it has been as high as 23% which is phenomenal,” he adds. “And we anticipate that returns will be high again this year.”

Diet will be Bio Vita Starter, with krill to start. But Bussanich is very excited about a feed they are currently testing. “We are working on formulating and testing feed using the Okanagan Lake Mysis shrimp. Currently, they are being sold to the home aquarium market and we are developing a formula to use them here.”

Mysis shrimp were intentionally introduced into Okanagan Lake in 1966 as a potential feed source to enhance Kokanee sport fishery. The shrimp population has exploded, while Kokanee stocks have declined and the shrimp are now suspected of competing with Kokanee fry for food. There is a provincially sponsored harvest to cull this invasive species.

No supplemental heat is required in the hatchery. A cooling system will bring hatch water down to natural river levels and will be used in thermal marking. Raceways are outside, surrounded by a bird proof fence. When the fry have grown to 1 gram size in the spring, another hose connects them to Shingle Creek and they are on their way south along the Okanagan River, to rear in Skaha Lake.

Flow sensors monitor the wells, Kitoi boxes and each raceway. The entire plant is run with state-of-the-art computer monitoring. Tetra Tech did the engineering design and management, with local Penticton firms Greyback Construction and Buccaneer Contracting, completing the building.

The strict husbandry practices they have been following in Lumby are expected to show continued success here.

“We are aiming for ‘no therapeutics,’” emphasizes Lawrence. “I’m really strict with our practices,” she adds. “These are my babies!” Raceways will be vacuumed daily with the slurry going to a concrete settling basin. Initial tests using feed composition, rates and fish densities, have indicated that the water discharge will be safe to return to the creek.

“When I was doing the license application, it was new to DFO that a First Nations group would own a sockeye hatchery of this size and are doing it for enhancement purposes. We’re not raising fish to sell,” notes Lawrence. “And it’s not costing Canadians a cent,” adds Bussanich. Funds for the hatchery have come entirely from the Public Utility Departments of Grant and Chelan Counties, in Washington State, as part of their Columbia River dam mitigation commitments.

The Okanagan Nation Alliance represents eight “Syilx” or “Okanagan” speaking communities around the Okanagan Basin, including the Colville Confederated Tribes in Washington State, on stewardship issues.

In the mid ’90s returns to the spawning grounds north of Oliver were as low as 5,000 fish. In 2008, four years after the start of the program, 165,000 sockeye crossed Wells Dam (the last hurdle on the Columbia River). Numbers have been increasing each year and by August 15 of this year, Wells Dam had seen a record of over 489,000 sockeye. Those numbers are enough to support a Traditional Food, Social and Ceremonial Fishery, a First Nations commercial fishery and a sport fishery in Osoyoos Lake.

The Okanagan run is one of only two remaining Columbia River stocks (the other is Wenatchee). Historically, sockeye returned to some six other systems in the Columbia basin, including Arrow Lakes in Canada and the Salmon, Payette and Deschutes rivers in the US.

“The sockeye are the keystone and it’s kick-starting a salmon return,” explains Bussanich. They estimate 2000 springs in Osoyoos Lake this year and there are also hundreds of steelhead returning. Twenty coho showed up last year and one Bull Trout.

“We expect that by 2017, there will be a significant Chinook fishery in the Okanagan, numbers that we haven’t seen since the ’60s” beams Bussanich.

Shayla Lawrence Hatchery Operations Biologist for the ONA, beside the raceways.

Richard Bussanich Hatchery Operations Biologist for the ONA, beside a Kitoi box in the incubation room.