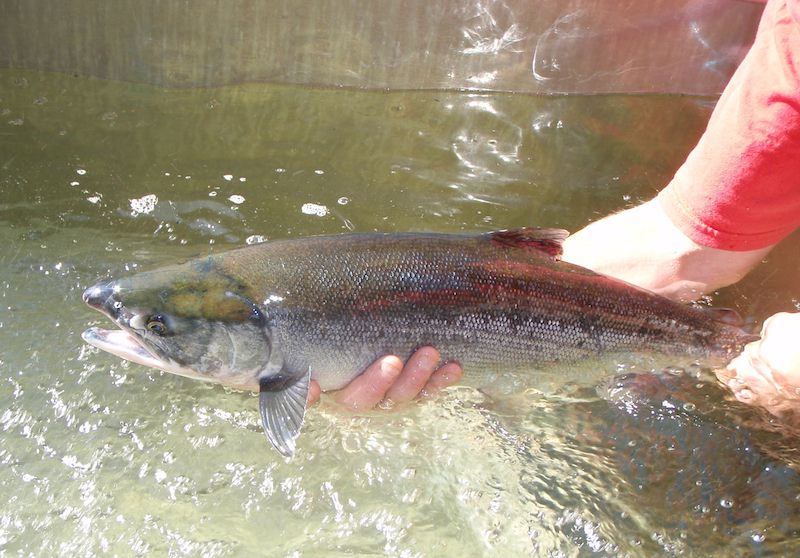 Sockeye salmon returning to BC’s South Alouette River and Alouette Lake are not spawning and the Alouette River Management Society (ARMS) is trying to find out why.

A sockeye run was wiped out in1926 when BC Hydro built the Alouette Dam, trapping sockeye in the lake and cutting off those in the river from their spawning grounds. Since 2005 sockeye-kokanee fry have been released over the dam’s spillway.

The number returning to spawn have ranged from four to 115. They are caught at the base of the dam and transported by truck to the lake. But the problem is they don’t seem to be spawning. The failure has been blamed on various factors including the stress caused by their transport, lack of suitable spawning ground in the lake, disease or parasites.

A $40,260 grant from the BC Hydro Wildlife Compensation Program is going to help ARMS find some answers. Ten of the sockeye-kokanee will be caught this year, fry will be bred and released next spring. Greta Borick-Cunningham, executive director of ARMS, said they hope to obtain about 20-25,000 fry.

Borick-Cunningham said some of the new funding for the society will go towards fitting adult sockeye being taken to the lake with electronic acoustic tags, so that monitors can keep track of their movement in the lake and with luck be able to find and keep an eye on redds they may produce.

ARMS was founded in 1993 and has been a part of the Alouette Adult Sockeye Enumeration Project since 2007. The society has been working alongside the BC Corrections hatchery unit – which works on the watershed in conjunction with the federal Department of Fisheries and Oceans – in its education program for a number of years.

Borick-Cunningham said society members put in around 1,500 hours of volunteer time in education, habitat-restoration, and river-cleanup work each year.