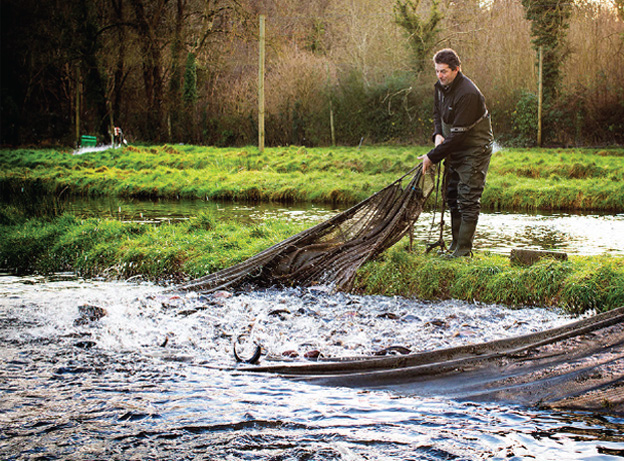 Ger Kerwin is the third generation to farm trout on Goatsbridge Farm.  One of Ireland's best-known trout farms has been producing trout caviar for about two years.

The history of Goatsbridge Trout Farm in County Kilkenny reaches back 800 years to 1180 when the monks of Terpoint Abbey near Thomastown fished in the fast-flowing waters of the Little Arrigle River. Today, it is one of Ireland’s best-known trout farms.

Mag and Ger Kerwin, the third-generation of Kerwins on the farm, run the business. The first fish ponds were created by Ger’s father in 1961 – years before Mag married Ger to become what she terms “a fish wife,” a prospect that horrified and dismayed her mother. “She got over it,” smiles Mag.

She explained that the farm no longer uses the old flow-through hatchery on the property. Two years ago a more modern former salmon hatchery was purchased. The old hatchery had rectangular tanks, but the new one has large circulars which are better for the fish.

Located about half-an-hour’s drive from the farm, the hatchery is the centre of production for the farm’s Goatsbridge caviar, that has been produced for about two years.

The roe for the caviar is stripped by hand from the fish when they mature, and is then “cured” by being washed in a 3% salt solution. The eggs then go into a tumbler for half-an-hour to ensure even distribution of the curing salt. Finally the caviar is put into 85g jars that are then pasturized in a steamer for five hours and 15 minutes at 74°C. The jars sell for €12.95 plus shipping.

“We do as much business as we wish,” said Kerwin, adding that as far as she’s concerned it’s not about making money but about enjoying fish farming – which she said they most certainly do.

Goatsbridge Trout Farm employs about 20 people. In addition to the trout and brand-name trout caviar, the farm sells perch (much of which goes to Switzerland).

“We have a new tinned smoked (trout) product, the first of its kind in Ireland,” she said. (The couple added a state-of-the-art processing and packaging facility in 2010.) Arctic charr is under consideration as another species they would like to grow.

Kerwin is reluctant to disclose figures but she said that the farm, which now has its own shop and visitor centre, can sell as much product as they choose to produce. The Kerwins intend to visit the US next year to introduce and sell their product there.