Staff at the US Fish and Wildlife Service’s Gavins Point National Fish Hatchery in South Dakota have finally got on top of a zebra-mussel invasion that’s been stalking the hatchery for well over a decade. 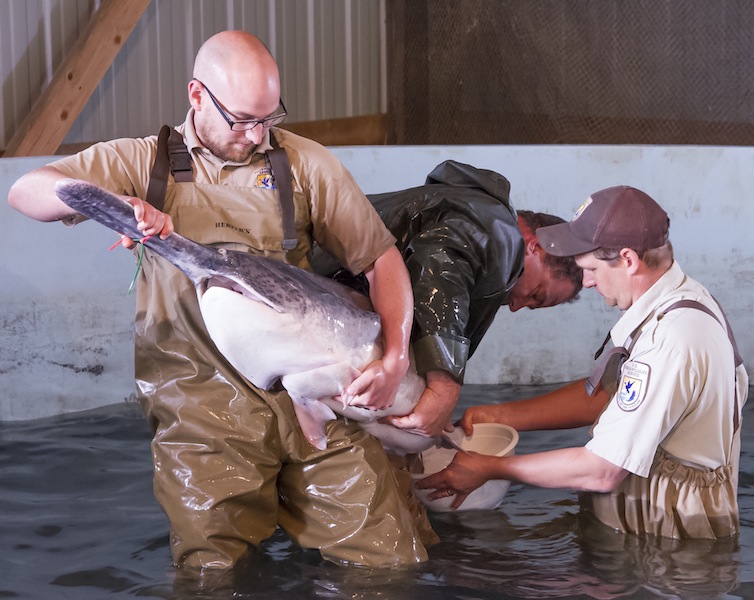 Broodstock paddlefish being spawned at the US Fish and Wildlife Service’s Gavins Point National Fish Hatchery. Upgraded equipment that filters out pests in the water New drum filters take sting out of zebra-mussel invasion at a paddlefish hatchery

What’s more, this year they’re in the process of putting out more than 82,000 paddlefish, which is a record for the facility and far above the usual requested number of about 40,000 according to assistant manager Nick Starzl.

Management personnel at the unit note that the improved production is due in no small part to the new and upgraded equipment which has been put in, including a couple of large drums filters that run in parallel, aimed at taking out anything under about 30 microns – including young zebra mussels.

The hatchery, which focuses on pallid sturgeon recovery, but also puts out other fish for stocking, has been fighting the invasive, equipment-clogging mussels all the way back to 2003 when they found the first suspect veliger in Lewis and Clark Lake.

That was when the staff set up a hazard analysis and critical control points (HACCP) plan and began treating the lake-intake water as positive for the pests.

They also started using filter socks on the ponds and on drum filters for the sturgeon and endangered-species buildings. And they began a chemical treatment on their fish prior to stocking, to ensure no zebra mussels went along with them.

The facility also switched over to only hauling stock-out fish using well water and not surface water for distribution trips.

But with the first adult zebra mussel found in the lake in 2004, they knew they were going to have millions of the pesky creatures headed their way, and they needed to seek enough money from hatchery funders to filter all intake water from the lake.

So, at a total cost of around $700,000 to the South Dakota Fish and Wildlife Service, the filter building, all the underground piping and two 30-micron filters were finished and installed last winter.

The two rotary drum filters installed measure about 3.5metres long and almost two metres in diameter. Each is capable of handling roughly 2000 gallons of lake water a minute.

Almost equally helpful, added Starzl, is the new pond-aeration equipment, which he believes is largely responsible for the unusually strong production the unit has seen in paddlefish.

Starzl said the hatchery staff tagged 90,000 paddlefish for stocking-out this year, prior to putting them into earthen holding ponds. Usually they lose about 8% of the fish to predation and bacterial infection, so that would still mean over 82,000 25-cm juveniles going out at about three months of age.

“In addition to the new aeration equipment, we refined some of the early-culture tanks to focus on proper densities for the fish,” Starzl said. “We also focussed on getting the bacterial load down to a minimum in the earthen ponds. So I think all that made a difference (to boost production).”

Stanzl said he doesn’t think the new system will totally eliminate mussels getting into the new 24-inch intake pipe from the lake, but he indicated that the overall system upgrade at Gavins Point has been largely very positive.